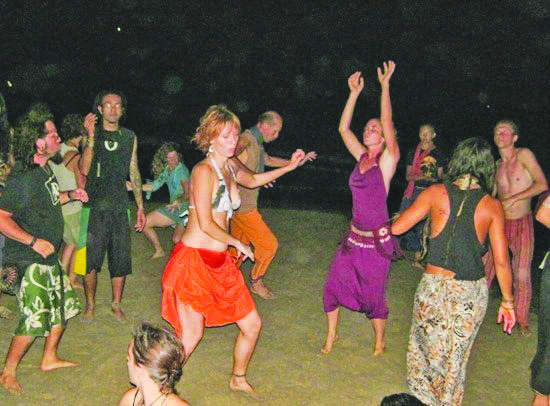 HIPPIES: The temple town of Gokarna has become a mini version of Goa, resembling Anjuna and Vagator beaches.

The temple town Gokarna near Karwar is famous for being the only temple in the country which pays reverence to Ravana. The foreign and desi Shivbhakts of Anjuna and Vagator visit Gokarna to see unique Om beach and for adventure activities…

MORE than a decade ago when I went to the Kashi of the South, Gokarna, near which are located the biggest naval airbase and the Kaiga nuclear plant, Gokarna was a genuine temple town. It had the ambiance of all the noted temple towns in the country ranging from Varansi and Orissa to the Meenakshi Madhurai Temple in Tamil Nadu and scores of others. Whenever you visit any of the temple towns you are surrounded by the Pandas. Traditionally considered the heirs of the pandava brothers of the `Mahabharata’, they have been reduced to behaving like scavengers. They have adopted the occupation of doing pooja for thousands if not several lakh of pilgrims who visit this temple places. They are dressed in saffron dhotis or often a one-piece saffron cloth, part of which is wrapped around the left shoulder.

When I visited Gokarna over a decade ago in the early hours of the morning I was surrounded by groups of pujari in the age range of eight to 80 years, all offering to do a special puja for me. I only later realised that as in the case of Banaras, Gokarna is also considered a very holy place to immerse the ashes of dead ones on the occasion of a first shraad. The rates vary from Rs100 to more than a lakh depending on how elaborate you want the puja to be.
What makes the temple unique is that it is a very ancient temple with its history going back to the 4th century AD. It is the only temple in the country with a icon of Ravana, who kidnapped Sita, wife of Ram. The story goes that Ravana was also a great bhakt of the most important god of the Hindu trinity, who is Lord Shiva, the destroyer. Lord Ram is considered an avatar or a disciple of Lord Shiva.
According to the story Ravana, who had acquired a lot of power because of his prayers, started harassing the gods and went to the extent of even kidnapping Sita. The gods approach Lord Shiva for solution to deal with the arrogant raksha (deman). Lord Shiva picked up a stone and placed it on the ground where the Shiva temple now stands in Gokarna. Lord Shiva asked Ravana to lift the stone from its place. The greater the effort that Ravana put into lifting the stone, the weaker he became. That is how Ravana lost all his powers. But Shiva, being a generous god, permitted an image of Ravana in the same temple dedicated to him at Gokarna.

A DECADE ago pilgrims came in their thousands to offer Abhishek to the linga here in the temple and pay homage to Ravana for his devotion to Lord Shiva. There are many stories in Hinduism where even demons are forgiven if they repent. For instance, there is the famous Onam festival in Kerala which commemorates the return to Kerala of King Mahabali. He became a very cruel king and tortured people but remained a bhakt of Shiva. On the appeal of the people, Lord Shiva had destroyed his empire. Mahabali became repentant and prayed to Shiva that he be allowed to come back to life for ten days in a year. Onam marks the return of the rule of King Mahabali or Kerala.
A few decades ago Gokarna was famous for another reason. Just as Goa, was in a sense discovered by the hippies in the 50s and 60s, similarly it was the hippies who brought a lot of fame to Gokarna. This is because Gokarna beach fronting the main Gokarna temple led to other beaches across the cliff side. Since the beaches could not be accessed by vehicles the hippies climbed and walked the cliff-side route to visit the other beaches which formed part of the Om beach. Now of course auto rickshaws and motor bikes can take you wherever you wish or to the nearest points providing access the other beaches.

In fact, Om beach has become a tourist resort. While ten years ago there was only one Gokarna town and a few lodges to stay, now there are half a dozen jungle lodges with five-star air-conditioned rooms and a range of adventure activities. In fact, one of our neighbours at Stone Wood Nature Resort, where we stayed a night was the daughter-in-law of the Vice-President of India Venkaiah Naidu. This beach resort matched the best in the country with showers, air-conditioners, adventures sports and room service. There were half-a-dozen similar resorts named Namaste or Shanti etcetera.
We do not know whether it was because of the novel coronavirus or something else but the temple town of Gokarna looked as if it has lost its popularity. There were hardly any priests or pilgrims to be seen. The rush of priests swamping you to do puja was totally missing. The temple itself which used to be houseful the entire day was virtually empty.

Earlier, they never let foreigners into the temple. Now perhaps taking the cue from Bom Jesus Basilica where the authorities were upset by tourists in hot pants and T-shirts visiting the shrine of St Francis Xavier, the temple priest at Gokarna too insisted that pilgrims going into the temple should be decently clothed. They even sold dhotis at the entrance of the temple in the courtyard to scantily dressed visitors so that they may be better attired in the temple and nobody would be affected by too much naked skin on display.
Though I was wearing only short pants and not hot pants the watchman at the temple entrance refused to let me in. I ask him to show me the rule which prevented me from entering the temple. He pointed out the board banning firangs people from entering the temple. I pointed out to him that it should be clear to him that I was not a foreigner. One of the temple-in-charge claimed that it was against the rule to go into temple in half pants. I told him I had some injuries below my knee and that is why I was wearing short pants. He then wanted to know if I was a Hindu. When I told him my full name was Peralam Vaidhyapater Padhbanam Narayan Iyer his whole attitude changed. He suggested that I should buy a `100 lungi from the temple authority and wear it around my waist before entering the temple. Though I did not see what difference it would make to either Lord Shiva or Lord Ravana I agreed and entered the temple before there was any more hangama.
What irritated me is that Gokarna is no longer a temple town. It looks like Anjuna and Vagator in Goa. Everywhere there are beach resorts. As in the case of the coastal villages of Goa there are motor cycles available for hire. There are shops selling music cassettes and CDs of the famous western stars. Gokarna has become just another beach resort instead of a temple town. yet another tourism resort place which people visit more for Om beach and adventure sports than to pray to Lord Shiva or Lord Ravana!