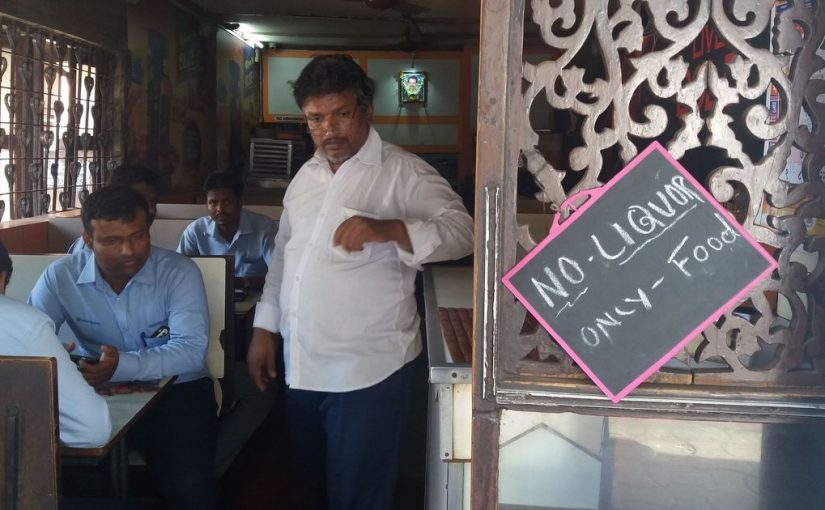 NO JOKE: From April 1, 2017, all liquor outlets, including restaurants in 5-star hotels, within 500 metres of national and state highways have been banned, leading to a million lost jobs

The Supreme Court order banning all daaru outlets within a 500 metre distance from National and State highways will impact over a million jobs.

OVER one million jobs are at risk following the Supreme Court’s ban on the selling and serving of liquor along Indian highways, warns the Hotel and Restaurant Association of Western India (HRAWI) in a press statement released on 1 April.

“An estimated number of 35,000 restaurants and bars could face closure or downsizing in the western region alone,” said HRAWI President Dillip Datwani.

MAHARASHTRA has 13,655 bars and liquor shops, of which about 290 bars will be hit in Mumbai alone, while in the Mumbai Metropolitan Region 2,000 and in the rest of Maharashtra 9,925 are at the risk of losing business.

Capital-intensive businesses like hotels and restaurants work on wafer-thin margins. An abrupt cancellation of sale of a core product will create havoc. Many of the hotels are in heavy debt and they may not be able to sustain this change of regulation.

In December 2016, the Supreme Court had ordered the closure of all liquor shops along the national and state highways if they were within 500 metres from the edge of a highway. It also directed the governments to “cease and desist” from issuing excise licenses after March 31. A Supreme Court bench that met on March 31 upheld the earlier order, but said that existing licenses could operate till September 30.

“The Indian food service industry, standing at `408 thousand crore today, would lose close to about `200 thousand crore on account of this verdict,” says Kamlesh Barot, former President, Federation of Hotel and Restaurant Associations of India (FHRAI).

Excise revenue from alcohol is `12,000 crore per annum, which would also fall by half. The travel and tourism sector contributes 7 per cent of India’s GDP, and generates 37.4 million jobs, but due to the highway liquor sale ban, at least 5 per cent or 1 million jobs will be lost.

The impact of the order, according to the HRAWI, is expected to hit hotels in the cities much harder as highways running through the cities are used more by local travellers than interstate drivers. A large number of marquee hotels and restaurants inside cities have their outlets along highways.

GURUGRAM’S CyberHub is one such zone. The Quint’s Ritwik Sarkar took a stroll through the popular area that houses 34 pubs. A representative of the Hard Rock Café told The Quint that an estimated 80 per cent of the establishment’s revenue comes from liquor sales – while the rest is distributed among food sales, merchandise and tickets for music shows.

“A lot of people go to these places looking for alcohol because it’s a safe environment. They can go and have a drink and they know that there are good people coming there,” said Nikhil Shankaran Kutty, manager of Striker Pub and Brewery on Golf Course Road.

Anticipating an annual revenue loss of `2,500 crore following the Supreme Court ban, the Haryana government had sought legal assistance from the advocate general in January this year. According to a report in The Indian Express:

Haryana hoped for an annual revenue of about `5,000 crore by selling alcohol from about 3,000 liquor vends and bars, but now it anticipates a loss of 50 per cent following the apex court order.

THE News Minute (TNM) reports that several bars and pubs in Chennai and Bengaluru have also received notices to not serve alcohol.

TNM quoted the owner of 10 Downing Street in Chennai, Nagesh Reddy, as saying that since they had not received any notice they won’t shut operations.

But many pubs on Mount Road will have to, as it is a state highway. The 10 Downing Street pub in Coimbatore will shut down. We will start the work to petition the court after the weekend.

According to TNM, associations in Bengaluru have said that pubs and bars with valid licenses till July 1 will remain open. “As of now, it is just hearsay. We have not received any official word from any government department. For the bar owners who renewed their license before 15 December, their license is valid till 1 July,” said Ashish Kothare, Managing Committee member, National Restaurant Association of India. (NRAI)

One thought on “HIGHWAY BARS BANNED!”