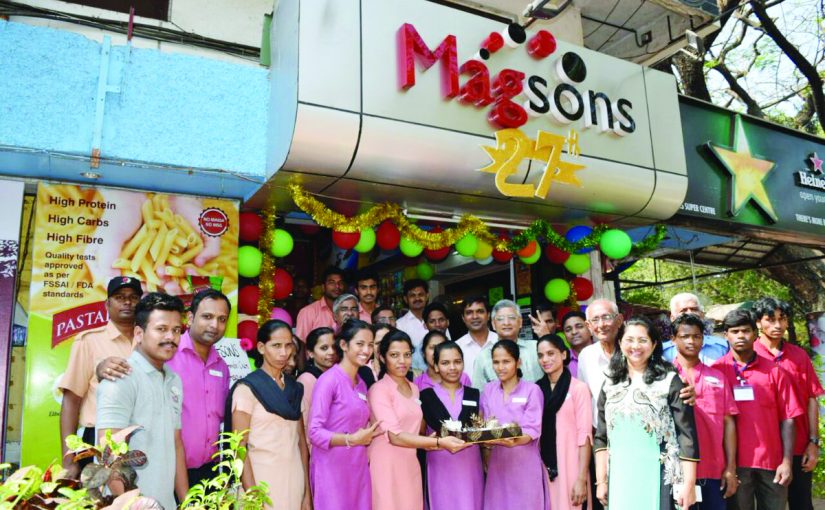 The Magsons group, comprising a dozen mini and medium size supermarkets, has earned the distinction of being the only Goan company to have attracted equity investment from the Godrej group company, Godrej Nature’s Basket, which specialises in retail stores offering garden-fresh vegetables and fruits

The prime minister of the legendry king Chandragupta Maurya, Kautilya, who was a financial genius, proclaimed that the world rotated on its stomach. If there is one community in the country which was quick to recognize the truth of this self-evident maxim, it was the Gujarati community.

Take for example, the city of London — which is considered the shopping Mecca of the bold and beautiful and the rich and powerful. The giant Selfridges store on Oxford Street is so big that you can buy anything from a pin to an elephant. Only Harrods is bigger. The food section of Selfridges looks like an ultra-modern giant butcher shop with legs of mutton hanging from stands, except that it is very hygienic. Similarly Marks and Spencer’s is considered the preferred choice of ladies to buy their inner wear.
But it is not these giant supermarket/high-end-stores which sustain the residents of London. It is the corner Gujarati shop on every major street which meets all daily requirements — ranging from newspapers to dairy products and other food items. They are the most viable business units as they are family-owned with the employees consisting of family members, and are open from early in the morning to late at night for the convenience of customers. The nature of the corner shops which stock everything essential is the personalised service offered by the owner. I remembered that when I stayed in London, my host, well-known filmmaker Kenneth Griffith, used to swear by his good friend Patel.
Goa before liberation was primarily a free port and a trading destination even more famous than present day Dubai. This was because unlike in newly independent India, which was obsessed with socialism and banned every luxury product from coke to blades, everything was available in Goa. Unlike the very high customs duty in British India and Nehru’s India after Independence, the taxes, whether on scotch or on Mercedes cars, were nominal. Legend has it that custom duty on watches was by weight — by the kilo.
Everyone from India used to come to Goa to shop for classical records, costume jewellery, Gillette blades, Sheaffer pens and of course liquor, which continues to be cheaper in Goa than any part of the country — attracting hordes of domestic tourists.
FAMILY HERITAGE
Magsons takes its inspiration from Maganlal Monji Canji, the grandfather of Kirit, who was a pioneering trader whose name

was known not only in Goa but across India, and even Japan, China and Europe. Magsons in its present form was nurtured by Jaisingh Maganlal, who continues to be the mascot of the group. His PR skills were definitely a major factor in the success of the Magsons group. Even after heart attacks and a stroke he used to stand at the door of the Magsons store, greeting customers with a hug exuding warmth.
It was Kirit, along with his partner, both in business and life, who took Magsons to unprecedented heights. From just one store near the La Campala colony (which has temporarily moved to Taleigao), the group now has eleven stores across Goa, with a total turnover estimated at over `50 crore.
Magsons’ success is based on the fact that it is compact yet exhaustive — it will meet all your requirements without being intimidating like the mega malls.
It has been the experience of many owners of malls that they are looked upon as places of entertainment. Malls may attract lots of footfalls but the sales may not be commensurate compared to the huge rents they have to pay. Malls which have multiplexes attached are relatively more successful than those without.
It is innovation that has driven the success of Magsons. They were not the first, but have been the most successful in setting up mini supermarkets attached to petrol pumps, like the Magsons outlet at the Don Bosco petrol pump. They were the first to offer cooked food — right from chicken and mutton curries to roasted turkey at Christmas time — freshly cooked, not packaged.

A typical Magsons store contains everything that a family needs. From food grains, atta, Maggi noodles, packaged food and cooking oil including extra virgin olive oil, to chocolates, biscuits and fancy sauces, not to mention the Gujarati farsan. Kirit and Andrea seem to have perfected the art of inventory control which is vital to the success of small to medium size supermarkets. You have to have fast moving goods so that your inventory costs are kept under control. It was under the leadership of Kirit and Andrea that imported foods of high quality were sourced from the best suppliers world-wide and made available to the upper-middle class and rich Goenkars and those who have relocated in Goa from other parts of the country and abroad. Interestingly I have found even 5-star hotel chefs doing their shopping at the Magsons Hymart located at the Caculo Mall.

A GOOD MATCH
Among those who have got into the highly profitable grocery and food business, the most ethical and respected are the Godrej group. For generations the Godrej group has been associated with the metal cupboard in everyone’s house, padlocks big and small, and of course, more-recently, a range of cosmetic products.
Although relatively late entrants into the food business, when they did start the Nature’s Basket retail chain they brought the stamp of Godrej quality to the shops. Godrej Nature’s Basket, as the name itself suggests, primarily focuses on fresh vegetables and food sourced directly from the farmer. I have been a frequent customer at the Godrej Nature’s Basket outlet in Juhu in Mumbai where my better three-quarters had a family house.
Godrej has not tried to set up huge supermarkets like Big Bazaar, Reliance, the Vishal group or even the Caculos and the Mall de Goa in Porvorim. Godrej Nature’s Basket stores are exclusively Godrej outlets which do not rent out their premises to others like the malls do. Malls only provide infrastructure and rely on rents and commissions from the stores that occupy space in the mall. Both malls and food chains have begun to expand to 2-tier and 3-tier towns and cities as part of their expansion drive.
Goan businesses have generally been conservative — reluctant to permit large corporates to invest in them. The biggest industrial houses in Goa like the Salgaocars, Dempos, Chowgules, Bandekars, Timblos etc are private limited companies. It is another matter that none of them really need outside investment as they are very cash rich.
Not many business houses in Goa are run professionally like Magsons which is among the requirements to attract investment

from big corporates. Among the strength of the Magsons group is their human resources management which I saw for myself when the group celebrated its 25th anniversary. All the employees of all the Magsons’ stores along with their families, and their vendors and associates, were invited for a gala party at Bay 15, at which almost everyone got recognition or an award for their performance. The relationship between employees and employers is very cordial with the attrition rate being among the lowest. If you look after your staff they will help you to grow the business.
It does not therefore come as a surprise that Godrej Nature’s Basket has decided to invest upto a reported 26% in the Magsons group. This is the first time a major corporate group is investing in a medium sized Goan company — particularly in the grocery and food segments.
The decision of Godrej to partner with Magsons is a recognition of the quality and professionalism of Magsons. Godrej Nature’s Basket is among the most respected names in the fresh food business and should add substantial value to the Magsons group. And Goa will have the guarantee of non-formalin fish and non-rotten apples and fruits. So much so, the tie up comes at the right time as Godrej Nature’s Basket will boost the already high reputation for quality and service that Magsons have.

I am convinced that table tennis players make good entrepreneurs. I first met Kirit as a champion table tennis player over 30 years ago. I know of at least two other table tennis players who became successful business men. They include Luis Tavora who started Poshak and Vero Nunes, who had the honour of playing with the first chief minister, Dayanand Bandodkar, and who went on to start the Bambolim Beach Resort.