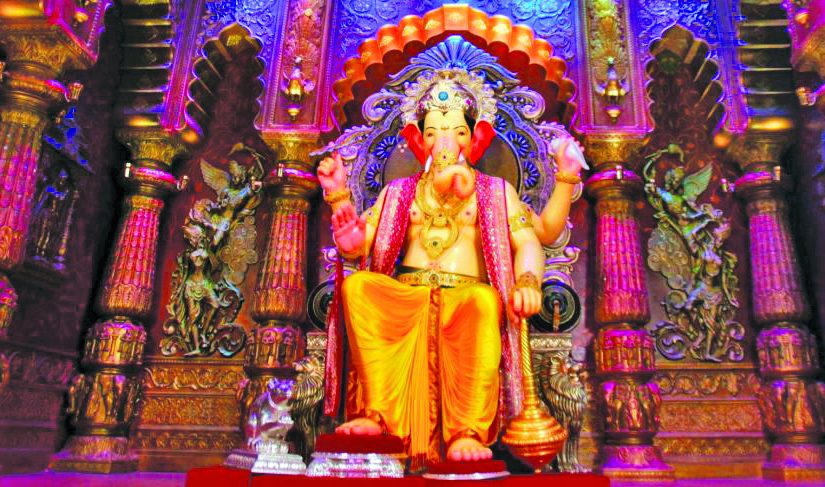 Raja: The Lalbaugh Ganesh mandal in the former textile mill area of Mumbai is the largest and the richest Ganesh mandal

Lord Ganesh is historically perceived as the remover of all obstacles which is why his name is first invoked whenever a new venture is started. Let us hope and pray that this Chovoth, Lord Ganesh will overcome Goa’s problem of complete breakdown of governance — reflected in potholes on the road, piled up garbage, mass failure of candidates in exams for government jobs and universal corruption

THE Konkan Railway trains are full with Goans returning from Mumbai and other parts of the Konkan. The flights from Bangalore and Mumbai and even Silicon Valley and the UK are full of Goans returning home for Chovoth. Just as Goan Catholics come back to Goa like homing pigeons during Christmas and New Year, all Goan Hindus located outside Goa and outside the country stretching from Karachi and Nairobi to the United States and Europe return to Goa for the most important Hindu festival in the Konkan district — a festival which takes precedence over Diwali and Dassehra or any other pan-Indian festival.

The festival of Chovoth, which marks the birthday of the elephant headed God Shri Ganesh, is not only the most important festival in the Konkan, including Goa, but is essentially a family festival. A festival which brings the entire extended family together from all over the world. The eldest son of the extended family normally keeps the idol of Ganesh at home. Large ancestral families keep the idol and open up the ancestral house and stay therefor the duration of the festival whether it is one and half days or seven days or 11 days or even 21 days.
Chovoth was never a sarvajanik or a community festival in Goa and the Konkan. It was always a family centric festival . Except it was not limited to the nuclear family but was an annual general body meeting of extended Goan families. Partly facilitated by the Uniform Civil Code where every member of the family has a share of the ancestral property. Goans come together twice a year. On Chovoth and Tulsi Vivah which comes 40 days after Diwali. The Sarvajanik festival that has now become popular in Goa is an import from Maharashtra. Even in Maharashtra it was first introduced by Lokmanya Tilak. The British had banned political meetings. To overcome this hurdle and to rally the community against British rule Tilak came up with a brilliant idea of using Ganesh Chaturthi. This is the origin of the massive Sarvajanik festivals held all over Maharashtra with the epicenter in Pune. Where under the patronage of the former Congress MP, Suresh Kamladi, a 10-day festival of the best music and dance is held along with Ganesh Chaturthi.
In Mumbai of course the Sarvajanik Ganesh mandal which is a favourite of the film stars is the Lal Bagh Raja in the former mill area of Parel. Traditionally, it is the largest and the most opulent of the Ganesh mandals in the state, attracting donations in hundreds of crores. This year the Ganesh mandals not only in Mumbai, but all over Maharashtra, will be bigger and more lavish in the run-up to the Lok Sabha elections and the rivalry between the BJP and the Shiv Sena. Politicians will outdo each other in ostentation and attract the largest crowds to the pandal in their Assembly and Lok Sabha and Assembly constituencies.
In Goa relatively there are very few Sarvajanik Ganesh mandals. Significantly the oldest and the most traditional of them is the Ganesh mandal of Panjim Police Station and the Madgaon Police Station. Perhaps the police think that Ganesh will protect them from the wrath of the politicians.
The celebration of Chovoth as it is called in Goa is unique. In the first place all communities in Goa ranging from Saraswat

Brahmins to the tribals like Gaudis, Kunbis, Velips and Dhangads celebrate Ganesh with equal enthusiasm. We have witnessed the greatest enthusiasm for Chovoth among the Gaudis and Velips staying in the slum village of Aivao which is just below the Raj Bjhavan. At the other end of the scale there is a massive Chovoth celebration at the centuries old Mamai Kamat home where upto 500 people sit down for lunch on Chovoth days which is cooked by family members. It is the traditional Goan Saraswat meal comprising of moogachya gathi, kathkate, dal ros, and the most favourite sweet piece de resistance modak and nevro.
I recall a Ganesh festival with several kinds of modak which can be made from moong and jaggery and range of other fillings. Unfortunately, there is an increasing tendency to fry the modaks instead of steaming them lovingly at home. The modaks have been reduced to conical peda.
The other special aspect of Chovoth in Goa is the tradition of matoli. The idol of Lord Ganesh which is brought home on the eve of Chovoth is kept outside the house. It is only after the bugee or priest comes and performs the puja is the image of Lord Ganesh formally installed. There is such a desperate shortage of burgees that large numbers of them are imported from neighbouring Karnataka, particularly Udipi. Families have to wait for the bugee to come however late it may be before they an install the Ganesh idol and have their meals. Even if it is 4 pm. The Ganesh meal are of course lavish and to die for. Which is not surprisingly considering that the most prominent feature of Ganesh is his bulging stomach which is an invitation to feast.
The other unique feature of Chovoth in Goa is the canopy or matoli under which Lord Ganesh is installed. The canopy historically used to be entirely organic over two dozen fruits and vegetables and rare herbs and berries form part of the matoli. The forest are plundered to find matoli items which is done mostly by the tribals. They then offer the matoli items to the public at huge bazaars the most famous being at the Banastari bazaar. The matoli merchants already setting up shop along the Campal promenade in Panjim. Even malls have got into the act with the Caculo Mall holding a matoli festival in early

September. The matoli unfortunately has become more and more synthetic with styrofoam increasingly being used for creating the little mandal which houses Lord Ganesh for the duration of his stay. Maharashtra is one of the few states which has banned the use of styrofoam. In an attempt to promote eco-friendly Ganeshas artisans are being encourage to make the traditional Ganeshas out of clay and not out of plaster of Paris. Not with much success as plaster of Paris and styrofoam are still the mainstay of many a household Ganesh. The worry is that when Ganesh is finally given a farewell the seas and river bodies and wells are full of plastic waste which go into the stomach of fish and come back to haunt us. Plastic waste which can be even as dangerous than formalin in fish.
It is a misconception that Ganesh Chaturthi is only celebrated in the Konkan belt and Maharashtra. It is celebrated with equal fervour in Tamil Nadu. I can vouch for this as historically I am from Chennai. As in the case of the Konkan, Ganesh Chaturthi it strictly a family festival in the south. Ganesh is referred to as Pulliar. Modaks are common to both Konkan and Tamil Nadu celebration of Lord Ganesh. Except that in Tamil Nadu steamed modaks are the norm. With a wide range of modaks with different sour and sweet stuffings. But the sentiment is common. Throughout the country it is believed that Ganesh should be the first god to be invoked in any religious ceremony. This is because of the belief that Ganesh is the remover of all obstacles.
There is an interesting version of the Ganesh origins in the new Shiva series by Amish Tripathi who has made a fine art of converting ancient legends into contemporary fiction. According to him Ganesh was the lord of the Nagas. Not the Nagas of the northeast but the mythical nagas of ancient times. All children who were born with deformities were labelled nagas and banished to Panchvati. Their queen was Kali according to the author. The nagas were considered the fairest of them all in upholding truth and justice. Coincidentally or otherwise Panchavati is present-day Nagpur which is the headquarters of the RSS.

Eco-Friendly idols: Going green is the new mantra, say no to idols made of chemical, plaster of paris, clay, plastic, thermocol (polystyrene). Opt for natural, biodegradable material so that after immersion (visarjan) it does not pollute water and surroundings. Use natural products such as unbaked clay, coconut, paint with natural colours, etc .
Limited size and number of Ganesh idols: Bigger size idols take space and consume more clay or POP, adding more waste to the environment. Immersion is also difficult as it does not dissolve easily. They also leads to traffic congestion as they are difficult to transport.
Save energy: Switch on decorative lights during the “aarti” or “pooja” and evenings only when necessary. Use energy efficient CFL tubes instead of bulbs to save electricity. Wrap coloured papers on bulbs rather than buying expensive bulbs.
Natural colours for Rangoli: Use natural biodegradable colours for making Rangoli such as turmeric, henna, mehendi, rice powder, gulaal. Or make natural colour from flowers such as marigold. Such colours do not pose a threat to human health and do not affect the environment also.
Eco friendly decoration: In festivals people generally use plastic and non-degradable material. These materials add more danger to our environment when dumped as garbage later. You can use instead paper flowers or natural flowers for decoration. Natural materials like cloth, wood, paper can be used to make dolls, puppets, and bells to decorate around Ganpati idol. Make beautiful paper decoration instead of thermocol, which is also not degradable.
Ban Plastic: Offerings, prasad, fruits which are carried to pandals are discarded as garbage. Use cloth bags or biodegradable and reusable bags. Use natural plates like banana leaves instead of plastic plates for distributing prasad.
Noise Pollution: Use mridangam, tabla and such low sound instruments if possible. Loudspeakers can create problems to hospitals, old age homes, and educational institutes. Speakers should not be used between 10 pm and 6 am. People should abide by the rules. Avoid bursting firecrackers which cause environmental and noise pollution.
Artificial tanks: Use artificial tanks for immersion instead of natural water sources which will be used for irrigation or drinking purposes later.
Compost pit for organic material: Collect the offerings of flowers, garlands often called “Nirmalya” and other organic material and put them in a community built compost pit. This compost material can be used to fertilize your garden. If you must immerse them, wrap them in newspapers instead of polythene bags as paper is biodegradable. Dried flowers can be used later to make natural colours or decorative paper for gifts.
Symbolic immersion: Instead of immersing Ganesh idol in a water body, it can be symbolically immersed at home. Some people use a metal or stone idol and symbolically immerse this in a bucket of water, or even carry it in procession to the sea, hold it under the water, and then bring it back home for the next year. A betel nut in place of the actual idol can be immersed in a bucket of water. Another way of immersion can be sprinkling a few drops of water on the idol and then wiping it off and keeping it for next year’s use.
3Rs – Reduce, Reuse and Recycle: There are three key factors when thinking about how to recycle — reduce, reuse and recycle.