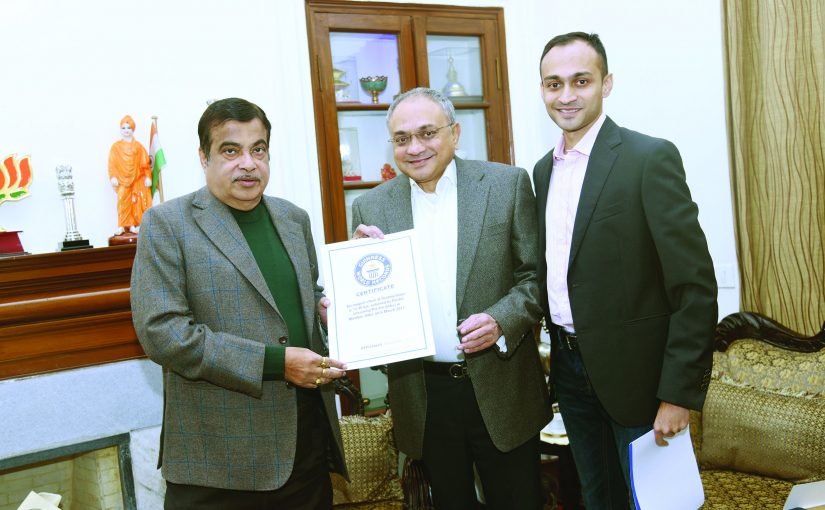 Drishti Marine today announced their entry into the Guinness World Record for creating the longest chain of buoys, for the first-ever course on water for the Nexa P1 Powerboat, Indian Grand Prix of the Seas.
Nitin Gadkari, Hon. Union Minister for Road Transport & Highways, Shipping and Water Resources, River Development & Ganga Rejuvenation, Government of India congratulated Drishti Marine on the feat and handed over the Guinness World Record Certification which marks a first in racing history, to Rajiv Somani, Chairman, Drishti Marine and Ankit Somani, MD, Drishti Marine.
The lineage to shape an unprecedented feat resulted in the creation of this course on water for Procam International, India’s leading sports management company. Drishti Marine created the longest chain of buoys measuring 11.46 km to craft this race course on water.
A global first in racing history, Ankit Somani, MD, Drishti Marine along with his team of 60 workers built the course for racing purposes at the inaugural World Championship Series which was held in Mumbai.
Drishti Marine took on the challenge to make the world’s first ever race track on water. This was the first time in the world that something on this scale had been attempted. Ankit Somani, MD, Drishti Marine along with his team of 60 workers took over three weeks to craft the 11.46 km stretch of buoys to create a 5.2 km race course on water. 5,700 buoys or floating balloons were used to create the magnificent floating race course.
The Guinness World Record body who completed the reviews and assessment of facts earlier this year, congratulated the team at Drishti Marine for making it into the record books and being bestowed with the world record for creating the longest chain of buoys to craft a race course on water.