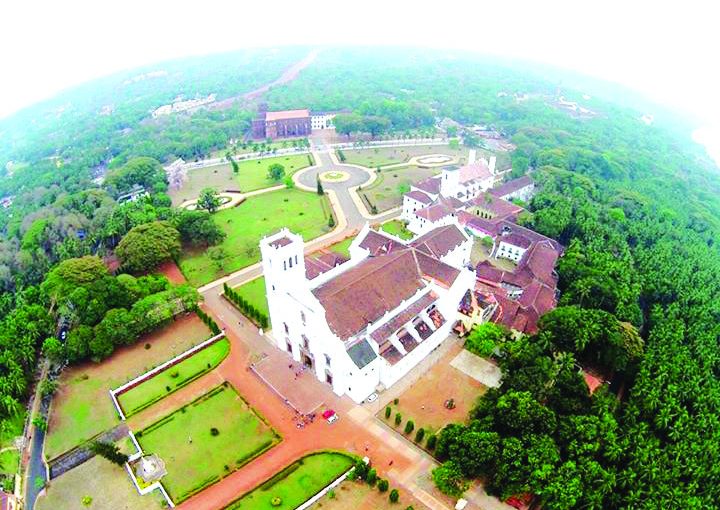 SAVE: Most enlightened countries have converted heritage areas like Old Goa with into archeological parks and gardens in toto. For example, Hampi, Borobudur, Angkor Wat, etc

PROF EDGAR F RIBEIRO, experienced and always affectionate, also chief planner for Town & Country Planning Organisation for the Government of India for many years, keeps reiterating one thing. The people (either urban or rural citizens) are not against development and progress — as long as it is of the sustainable kind which will not shatter or worsen the quality of life they live presently. Unfortunately, governments in power in a hurry to reap quick gains today out of political compulsions can be very insensitive to the needs of the very people who vote them into power.
Goa has had excellent regional plans, including the much praised Regional Plan 2021, but here again the powers-that-be were only interested in picking and choosing selectively what suited them to implement and the rest of it was relegated to the dust bin or so to speak. Prof Edgar F Ribeiro is very positive about progress and development as long as it takes place along fundamental land use rules and regulations which are framed for the larger good and long-term interests of the land in question and the people. He was speaking to an anxious group of young citizens, architects, students of heritage conservation, at the Charles Correa Foundation located at heritage district Fontainhas, Panaji, on February 15, 2019.
On one hand he pointed out reasonably the government of Goa is keen to promote cultural and heritage tourism in places like Old Goa which is packed with architectural history and the church buildings of old recognized and listed by UNESCO. You would think the Archeological Society of India (ASI) would play a role in overseeing that no arbitrary, illegal construction activity would impact the conservation status of Old Goa — but it is not happening perhaps effectively enough. In fact, if the government is serious about promoting cultural, heritage, historical tourism, the Old Goa precinct could be upgraded as archaeology park/ historical gardens (as has been done in other countries and this was prescribed in Regional Plan 2021). Once something like this is tampered with without careful consideration, planning and consensus, there is the danger that it will be lost forever and would be impossible to recover at a later date. Once heritage is lost it is lost forever. Undoubtedly an ill-conceived highway running through Old Goa is driving all the runaway growth but this is also affecting Old Goa badly. This is how a country can lose forever its heritage and culture along with it for want of foresight and sensitivity on the subject of what conservation and preservation can do for tourism economically and socially.
Land is a static resource, pointed out Prof Edgar, and it is getting more and more scarce, it is vital that local area planning comes into the picture. Old Goa is clearly a case study of how to negate future tourism development! In contrast, thanks to the National Monuments Authority, Delhi has succeeded in implementing the law on conserving and preserving monuments and there are even 50 km buffer zones in place. In Goa there are no buffer zones, “Be aware of the law and fight through the law.”
So Prof Edgar advised the activist groups now waking up to the damage already under way as fait accompli in Old Goa, “The ASI protects and represents 3,800 such sites in India and 21 are in Goa!” His years in Delhi town planning, commented Prof Edgar Ribeiro, had taught him that it’s best to work through government links, through local authorities, the Panchayats, the residents whose quality of life is at stake in any developmental project mooted by whosoever…we have an excellent Constitution in place to rescue any project howsoever ill-conceived.
Ground realities may be frustrating, he concluded, but always keep in mind that the best development and progress is a “down to top process” and not up to down process as it is happening increasingly in Goa. It is time for Goans to do their homework at ground level and study their land maps on which many features enjoy legal protection like sacred groves and “Goa is the only state which protects hill slopes but these have been so badly damaged.”
Goans must ask their local councilors a lot of questions and brief them! As for Old Goa it is worth rescuing for history’s sake alone, for its 14 monuments of national importance (out of the 21 monuments in India) and these are legally protected – no politician, no builder, no khaas aadmi and no aam aadmi citizen can break the law. The law is always on the side of the people except that a horrible thing which is happening in Old Goa, as someone in the group present pointed out, “people themselves are putting their small agricultural plots of land together to make a larger plot and getting permission to promote gated community housing complexes! The gated community housing complex bug has bitten Goans in a big way regardless of whether it will improve or further compromise their quality of life in years to come.

Last heard of about the public interest litigation (PIL) filed by Goa Bachao Abhiyan and Goa Foundation, the High Court has held that any action taken by parties in connection with the change of zone in the regional plan under Section 16B of the Town & Country Planning (TCP) Act, 1974, will be subject to the outcome of the PIL pending before it. It may be remembered that TCP Minister Vijay Sardesai had introduced and passed a bill in the Goa Assembly during the monsoon session last year, allowing the TCP board to make on a case to case basis any land use changes required by parties to the statutory Regional Plan of Goa 2021 on payment of fees.
However, The Goa Town & Country Plan (Amendment) Act 2018 can be notified only after the outcome of the public litigation pending before the High Court and due to come up anew on February 26, 2019. The PIL seeks direction for quashing and setting aside provisions of law (section 16B) of the TCP Act and proviso to Regulation 6.1.1(d) of the Goa Land Development & Building Construction Regulations, 2010, because it will result in ad-hoc, arbitrary conversions of privately owned plots based on individual applications. Such conversions will open the gates to rampant and unbalanced development in Goa and are not in the interests of citizens, they are also incompatible with the State’s ecological needs and violate Article 14.