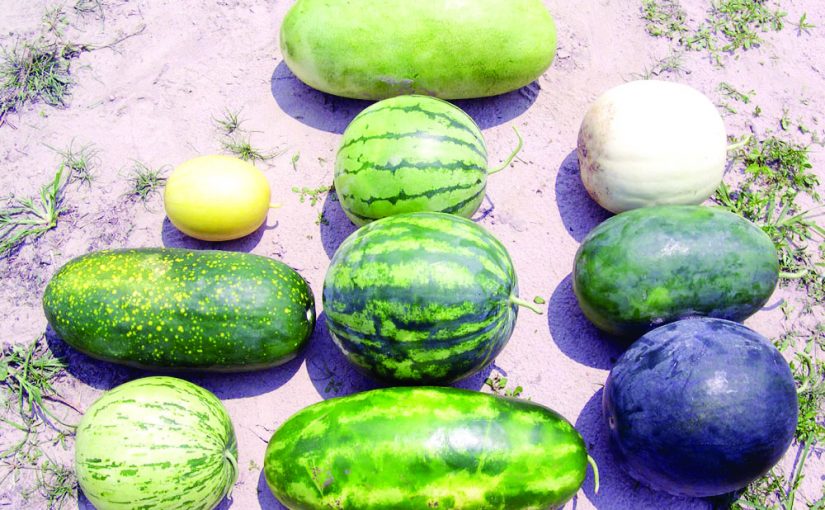 WATERMELONS ARE SYNONYMOUS WITH SUMMERTIME: Potent fruit full of delicious juicy electrolytes, nutrient values, oxidants…what’s there not  to like?

Eat more watermelons this summer, but make sure they’re not artificially cultivated and ripened. Don’t buy if misshapen, seeds white, pale flesh within with cracks, taste flavourless and like tissue paper!

How to select a good watermelon?

CHINA is the largest grower of watermelons but some bad farming practices include the use of a chemical called forcholfenuron to hasten ripening. Growth enhancers used can also make watermelons grow big, fat and fast, watch out for these things…watermelons with pale flesh, white seeds, cracks within, not rich red within – don’t buy! Misshapen? Don’t buy. Don’t know if Goan watermelon farmers practice any of these malpractices…but do check it out before buying watermelons. A good watermelon would be dense to feel and tap, it would have a yellowish mark where it sat on the earth and the top stem would be dryish and strong (not greenish).

APRIL’S just arrived and summer time’s colourful carnival of flowering trees is already here in a hurry maybe, it’s my favourite season for catching up with orange African tulips, lustrously red and pink silk cottons, crinkly yellow copperpods, scarlets and peaches of gulmohars, sunshine-filled laburnums, rich pink and terracotta of cassias coming into bloom here and there offering vistas of intoxicating beauty. Never mind that the sudden summer heat’s grapevine is talking of heat wave and heat stroke, stay at home and rest and the rest of all the stay at home hoopla.

I cannot stay at home being an eternal wanderer! All I can say is drape your head, wear a cap/hat, carry sun umbrella if going out walking in the afternoon sun;  stay hydrated with potable water, buttermilk, not too sweet and tart sweet fruit juices. Hey, it’s watermelon season and there’re lots of watermelons in Goa! I’m beginning  to see piles of them in the market. Make the most of them — the most lovely, agreeable salad going is chunks, slices, triangles, cubes of melon tossed in chunks, slices, triangles, cubes of the salty feta cheese, chill in fridge and enjoy a bowlful to fill up and cool down. Exchange feta with cottage cheese if you wish.

Melon juice spiked with lemon juice is a great refresher. I’ve been reading a great deal about melons in Goa these days and that their home is in Parra from where come the best watermelons. Former Chief Minister Manohar Parrikar was reportedly very fond of watermelons and remembered them nostalgically while offering some insight into their farming in Goa while delivering a talk at the Federation of Gujarat Industries in Vadodara. I’m so charmed I’m quoting him here for more readers’ discussions and what not for whatever it is worth.

In his speech Mr Parrikar reminisced: “I am from the village of Parra in Goa, hence we are called Parrikars. My village is famous for its watermelons. When I was a child, the farmers would organize a watermelon-eating contest at the end of the harvest season in May.  All the kids would be invited to eat as many watermelons as they wanted.

“Years later, I went to IIT Mumbai to study engineering. I went back to my village after 6.5 years.  I went to the market looking for watermelons. They were all gone. The ones that were there were so small. I went to see the farmer who hosted the watermelon-eating contest. His son had taken over. He would host the contest but there was a difference.

“When the older farmer gave us watermelons to eat he would ask us to spit out the seeds into a bowl. We were told not to bite into the seeds. He was collecting the seeds for his next crop. We were unpaid child labourers, actually. He kept his best watermelons for the contest and he got the best seeds which would yield even bigger watermelons the next year.

“His son, when he took over, realized that the larger watermelons would fetch more money in the market so he sold the larger ones and kept the smaller ones for the contest. The next year, the watermelons were smaller, the year later even smaller. In watermelons the generation is one year. In seven years, Parra’s best  watermelons were finished. In humans, generations change after 25 years. It will take us 200 years to figure what we were doing wrong while educating our children.”

BUT to stay with watermelons do you know from where they come originally?  Believe it or not from the Kalahari desert of Africa!  From all accounts the first recorded watermelon harvest took place nearly 5,000 years ago in Egypt, watermelons are depicted in Egyptian hieroglyphics on walls of ancient buildings…Egyptian tomb paintings and ancient Hebrew texts rave about the fruit of the watermelon as the people’s favourite summertime fruit. It’s said the Egyptians were great cultivars. Much later on after migrating to north America the fruit became the “fruit of angels” …but what we see today is the result of years of selectively breeding the watermelon’s wild, hard, pale-green fleshed and bitterish ancestor.

You would not recognize it as today’s gorgeous watermelon, a prized table fruit. At one of the Botanical Society of Goa’s recent fruit festivals I saw an exquisitely yellow-fleshed watermelon,  haven’t tasted it yet though, it’s supposed to be sweet deliciousness. Today watermelons come seeded, seedless, mini or personal, yellow or orange and don’t knock them, watermelons are 92% water (hence the name) but they’re rich in vits (vitamins), mins (minerals), antioxidants — you don’t want to become a basket case of ill health, eat more watermelon! Low in calories too. I read somewhere that if you’re impotent, eat watermelons! If you have asthma, eat watermelons! If you have kidney problems, eat watermelons. Watermelons are potassium-rich cleansers and reduce uric acid, prevent heat stroke, and because they are high in lycopene they’re also anticarcinogenic. Heart-friendly, diabetic-friendly, anti-inflammation. They have amino acid L-citrulline and that’s why sports folk like taking watermelon breaks because it hydrates and eases sore muscles. So watermelons are big deal, okay.

That’s the medical brief. Watermelons are described as nutrient dense food.  There are varieties of watermelons with names like Citrullus lanatus (botanically, the yellow one) and “Early Moonbeam,” “Golden Crown Hybrid,” “Golden Midget”….how about Organic Non-GMO Golden Midget? It’s said to be an interesting watermelon for cooler climates and has a yellow rind, rosy pink flesh crisp and sweet. This is the heirloom watermelon maybe from the sound of it and hard to come by in India, what we see most commonly in India is presumably the Citrullus vulgaris variety.

ANYWAY, there are watermelons and watermelons and one may wax lyrical about their beauty outside and inside. The USA market offers something like 25 sweet watermelon varieties ranging from round to oval and sizes of course may be heavyweights. Hey, watermelons have gender! Male watermelons are longer, more oval, more watery; female watermelons rounder, sweeter…watermelons, pumpkins, bananas, avocados…they’re all classified as berries (while strawberries are not!). The official definition of a berry is “a flesh fruit produced from a single ovary.”

And some more: watermelon is considered both fruit and vegetable. Fruit because it grows from a seed, has a sweet flavour and refreshing qualities, vegetable because it is harvested and cleared from the field like other vegetables. Watermelons are from the botanical family of Cucurbitaceae (same as cucumbers) and they have been cultivated in India from as far back as 2,500 BC. This is to say go buy watermelons and treat your friends to them this week and do things with them at home!

If you do some video googling you’ll be zapped by how many ways watermelon may cut to entice and serve with ease. I always like to cube it and serve it in watermelon bowl itself and yes, the paler, tighter flesh hugging to the rind may be chopped, added to a salad or coleslaw for a fine watery crunch…it’s very lemony and “cucumbery” (to coin a word here). In the US of A I think they have a watermelon day or month (August). Watermelons are synonymous with summer be it there or here so I say again, go discover watermelons this April-May till the monsoon rains descend to save our souls.

ALSO think kokum, kokum, kokum…kokum tival, solkodi, have some great adventures with the Konkan fruit of the kokam in all the ways you know how! You must know the maroon dark kokum — fresh fruit or glistening salted peels — is the fat buster of the Konkan coast’s culinary meals, most folk at home who are not into a dairy culture but into a coconut and kokum culture prefer to wind up meals with the more flavourful kokam solkodi. Other times it’s traditional to serve mildly sweetened kokam flavoured tival if you drop by to say hello and as a matter of fact most of our five-star resorts welcome and greet you with a chilled kokum tival or light sherbet.

Refreshing cooled kokum tival or sherbet (much lighter than other sugary sherbet) is sometimes redolent of cumin seeds or cardamom. This sweetened kokum  concentrate is available in Goa’s marketplaces, as also salty kokum ugal — both are useful in the kitchen for that savoury sweet touch here and there and make for short cuts to fixing tival or solkodi in a jiffy. I don’t know why a fresh kokum-coconut milk drink on the rocks has not caught up with us come summer time? Here I am not referring to the solkoddi version spiked with green chili, chopped green coriander.

I would think rich maroon sours of kokum would blend well with naturally sweet coconut milk. Add a teaspoon of kokum agal to a glass of diluted coconut milk and serve on the rocks….I haven’t tried it out yet but will one of these summer days. Or does it sound yuk? (Sigh) There’s so much one could do with kokum but …we don’t. Add kokum peels to ladies finger, make kokum chutney, grate them into a salad. It’s high time someone organized an exclusive kokum festival in Goa!

A RECIPE I came across recently caught my fancy and am sharing it here with readers because it is so useful, so easy to do:

Method: Mix all chopped ingredients together, ginger-garlic and turmeric powder, break in the eggs and mix. Just before preparing mix in cubed bread. Heat a pan, spoon in butter or olive oil, pour in mixture and scramble over high heat till set. Do not over scramble! Serve as breakfast, snack or in lunchbox. Enjoy your scrambled bread!

NOTE: This recipe reminds me of how in Gujarati homes leftover rotli (phulka) is torn into largish pieces, tossed in bit salt, turmeric powder, red chili powder, dhani-jeera powder, smear and toss all nicely and temper in bit oil, cumin seeds, sprig of curry leaves, pinch hing. When the rotli pieces are more or less crispy (don’t burn) add in buttermilk and bring to a simmer. Get a lovely soft squishy tangy “vagareli  rotli” to live for, real comfort food! If you add garlic bits or grate in garlic in the tempering it’s even more delicious to live for.