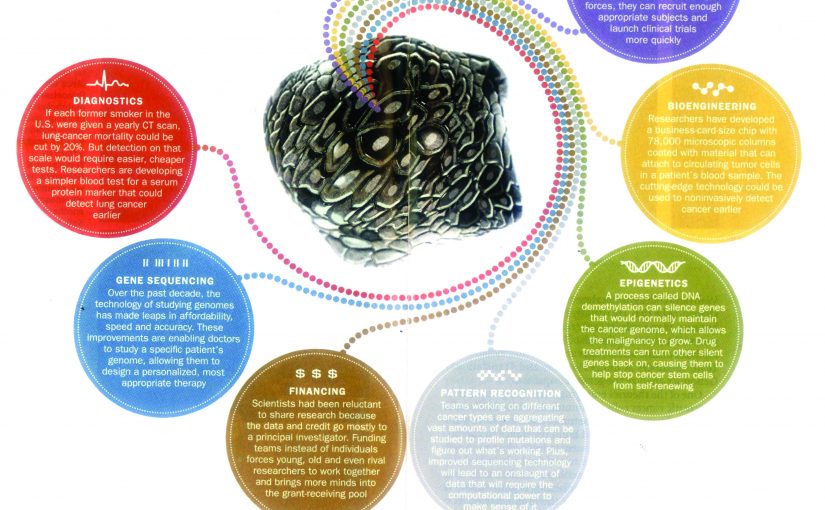 BREAKING BAD
Taking advantage of strength in numbers, researchers are tackling cancer, armed with a range of enhanced weapons, from genomics to drug development to diagnostics to better ways to raise and allocate funds

COME to think of it sooner or later we’re all chasing cancer and ways and means to cope with it. There’s an epidemic of it the world over and in India too the dreaded disease is making inroads both in urban and rural areas. Everyone’s heard the word cancer! Who’s not heard of it? Celebrated cancer and blood specialist from Mumbai, Dr Ian Pinto, in his talk at the Caritas-sponsored CanSurvive-organised interactive meeting at the International Centre Goa on August 10, 2019, pointed out that till recent years “we never even heard of it!”
Today we hear of cancer every day. He was talking on the subject of “The Big C:Can it be prevented and treated?’ It was a talk full of information on the latest on the dreaded disease, pointing out that primarily we need to understand the disease and from where it is coming. From deteriorating environment and wrong lifestyles and only in very small cases courtesy inherited genes (only four to five percent of all cancers are due to genetic reasons, the Anjolie case in the USA is the rare one in this category). Cancer happens when our cells reproduce faster and create tumours which are seen as a lump or bump, the respected medical journal Lancet has detailed a 1990 to 2016 study of the grim rising scenario of cancer in India wherein 80% cases came in for treatment at the last minute. Unlike in the case of the Western countries, people in India are always delaying diagnosis and early treatment. In fact, said Dr Pinto, they go to elsewhere to alternative medicine doctors and when these don’t work they seek mainstream Allopathy cancer treatment!
The Indian cancer scenario is different with 70% cancer patients reporting in the third or fourth stage of cancer and they die in the very first year of commencement of treatment alone. Tobacco usage and especially in the form of gutka chewing is a major cause of cancer, “it is banned but it is easily available.” Second next biggest cause in obesity and here women are at risk factors; HIV is also very prevalent in India, and in about 25% of cases we don’t know what the cause is.
Breast cancer is replacing cervical cancer in India as the number one cause of death. There are four stages in cancer and the first question a patient asks when cancer is diagnosed, “What stage, doctor?” At late stages three and four the cancer is discovered to have spread via lymph nodes to other places like the lungs and then prognosis is slim, although there is always the effort to ease quality of life for the patient with palliative care.
Diagnosis in stage one cancer usually has 100% chances of survival for five years at least and more with lifestyle changes! So of critical importance is that people don’t neglect the early symptoms and most of us in educated urban lifestyles must be pretty clued about them. Dr Ian Pinto offered several insights into how in the countries of the West most people check out for cancer from the age of 40 to 45 years and even cancer patients in recovery do their check-ups as advised.
From the sound of it cancer treatments have come a long way from the conservative old surgery, now with immunotherapies playing a big role in tandem with chemotherapy and radiotherapy there is more hope surviving cancer. Cancer drugs are getting better and better with the focus being only on cancer cells, without damage to normal cells. The majority of cancers are driven by mutation cells. Some cancers like colon cancer may take ten years to manifest into a polyp, and it is important to diagnose it quickly as benign or malignant. Colonscopies are routine now so don’t be scared of them! Do a colonoscopy every ten years from 50 years of age. Things like pap smears are also pretty routine, “except that in the US now cervical cancer is diagnosed at stage one while in India it is at stage three or four…”
As Dr Pinto stressed anew all this is a lot to do with awareness and education. In India cervical cancer data is coming down but being replaced with breast cancer data. He returned to the dangers of smoking or chewing tobacco and joked that whenever friends smoke in his presence, he warns them, “I’m looking forward to seeing you soon in my clinic!” His tips are to watch out for blood anywhere be it in spit, urine or stool, unnatural loss of weight, shortness of breath, worry about a cough which won’t go away, difficulty in swallowing…many cancers are rooted in gastric complaints of hyperacidity.

Also, he said, don’t be so crazy about being overly sanitized! A US study has it that immune systems acquire natural resistance if we are exposed to infections in the air. The problem is where to draw the line? Reasonable amount but not excessive sanitation. The old adage that we are only as good as our immune system is as complicated as tricky, and cancer specialists working on immunotherapy drugs in laboratories are conscious of this because in a sense they are experimenting with the immune system of a cancer patient…as in how many liberties may be taken with it.
In the long run it is better to work on lifestyle changes to minimize cancer risks: If you don’t want to get cancer it helps to avoid tobacco in any form. It’s tough but walk 10,000 steps a day or walk 30 minutes (“most folk have a fitbit to advise them”); also, eat more fruit, vegetables, no transfats and his advice is no alcohol either for once you get addicted you are at risk, women are more vulnerable.
And finally, if you are diagnosed with cancer, be aware that cancer treatments have undergone a sea change in recent years and they are not like depicted in Hindi films! There is less collateral damage, there is something called “smart bomb chemotherapy” and even in stage four lung cancer tablets are there… in immunotherapy the drugs are based on reviving T-cells in the body to focus on breaking up sick cells of cancer, “Something like 16 drugs were recently approved in the US and these are immunotherapy drugs…. so even if you’re in your 90s don’t think there is no hope for you!”
Dr Pinto stresses that with the kind of drugs coming up age is no longer a factor in cancer treatment, “Even in the case of cancer patients in their 80s and 90s these drugs are well tolerated. I’ve a patient who’s 85 years but looks 60 years.” In conclusion, cancer treatment is such a complex disease that treatment has become more personalized, differing from cancer to cancer and person to person. Of course, the immunotherapy drugs are expensive and may not be available in India, that is perhaps why those who can afford it go abroad to the USA to be treated in cases of cancer.
Something which sounds insignificant, but Dr Ian Pinto in response to a query in the dynamic question and answer session which followed his talk, concluded on an interesting note: “In cancer I would say there is an emotional connect for stress relates to the immune system…the more the stress, the worst the outcome!” His suggestion is that when cancer is diagnosed we should not hide it from a patient, it is best to inform the patient and assure, reassure him or her that cancer is no longer a doomsday disease and one’s days need not be numbered, “Level out with the patient and it’s a good idea to bring back family time!”
Quite simply put families which stay together do better no matter what the disease, be it cancer. Most patients still want to live and improve the quality of their life. The bottom line idea is not be scared of cancer anymore. There is more hope at the end of every cancer patient’s tunnel. Where a younger generation is concerned, help them to make lifestyle and environmental changes — personal or impersonal. We’re all in it together as a community or a larger society.
Increasingly we hear and see that with lifestyle changes we suffer less and less from the degenerative diseases of obesity, hypertension, heart disease, diabetes, arthritis… and if at life’s end years cancer makes an appearance, consider yourself lucky but do not ignore it!