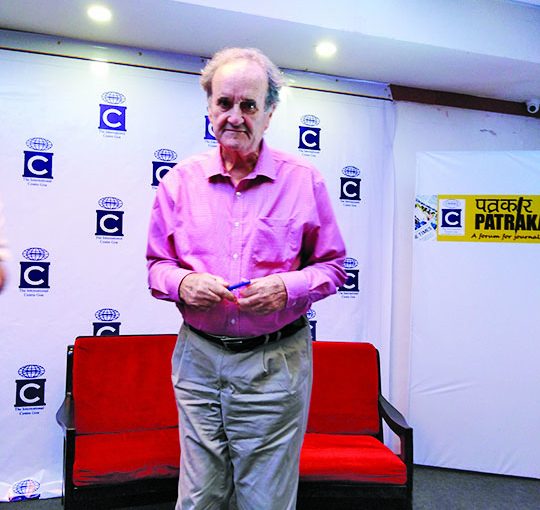 ANYONE desirous of understanding India in a hurry may read all of Mark Tully’s books! Of course, they’re slow reads, not quickie reads. He is the best on the subject of India in the English language. The thing about reading Mark Tully is there is so much down to earth fine reporting in whatever he writes. Also, few writers on the subject of what ails modern-day India 70 years after independence, can leave one with such a sense of déjà vu and despair as Mark Tully!
All first class journalists don’t make good writers. But Mark Tully is a good writer. As a journalist he has a finger on the pulse of what makes India tick and tock. As a writer he weaves reporting coherently into presenting a larger picture in historical context of time, place and premise. The Kolkata-born, England-educated British BBC journalist and author Sir Mark Tully who has lived and breathed the inside out of Indian politics, life and times good, bad and ugly for over 30 years, is someone whose books should be prescribed reading in academia as also our politicians, bureaucrats or so called government servants — that is, of course, if they would like to usher in ache din for the country any time soon.
I have just finished reading Mark Tully’s India In Slow Motion’ (one of his 20 odd books, most devoted to analysing India) and am addicted to the author! Tully is incomparable when it comes to offering insight into what ails our failing democracy. His style is deceptively gentle (like the man himself), but with a touch of dry humor as he details the human tragedies which plague India North to South and East to West and especially its people struggling to make ends meet 70 years after independence from colonial ruler Britain. Tully and his equally indefatigable colleague Gillian Wright have travelled the length and breadth of the sub-continent and seen rural corners the rest of us may be happily ignorant of in our urban ponds of comfort!India in Slow Motion’ recounts the travels of Tully and Wright in India to cover subjects ranging from Hindu extremism to child labor, Sufi mysticism to the crisis in agriculture, the persistence of political corruption to the problem of Kashmir …and challenges all our preconceived notions of what the country might be all about. The British Guardian observes “Few foreigners manage to get under the skin of the world’s biggest democracy the way he (Mark Tully) does, and fewer still can write about it with the clarity and insight he brings to all his work.”
Tully who was BBC correspondent for years now lives in New Delhi and continues to write and present his popular BBC Radio 4 programmes. Books he has worked with Gillian Wright include the much noted No Full Stops in India’,India’s Unending Journey’ and Non-Stop India’, as well as two volumes of short of short stories titledThe Heart of India’ and Upcountry Tales.’ Both Tully and Wright share a common passion for India and Gillian Wright’s books include translations of the modern Hindi classicsRaag Darbari’ by Srilal Shukla, A Village Divided’ by Rahi Masoom Reza andMiddle India,’ the selected short stories of Bhisham Sahni, her non-fiction includes The Presidential Retreats of India’, one of a series commissioned by Rashtrapati Bhavan. She has also authored children’s bookMishti, the Mirzapuri Labrador.’
The chapter titled Altered Altars in Tully’s `India in Slow Motion’ ought to be of special interest to us in Goa for its utterly unbiased portrait of Goa’s colonial history – here is a portrait of Goa against its fading Portuguese Christian background, like no Goa guidebook can give you. It’s a long, slow moving chapter, one worth reading in its entirety if seeking an understanding of Goa beyond momentary kitch. Mark Tully’s India books make for fascinating, extremely insightful education and memorable reading and to reiterate anew, his books should be read and discussed at college level forums at least (may be they already are).