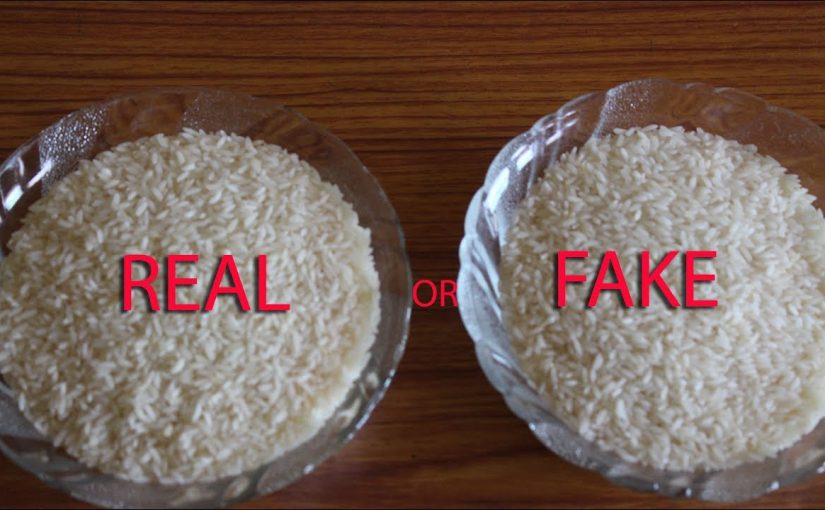 TRUTH: The facts of whether Chinese rice is made of plastic or has plastic components has yet to be established. The fact remains that some of the rice sold loose at small stores in Panaji appear to contain plastic contaminants

Even as you enjoy your Diwali be careful of what you put into your mouth. The basmati rice you believe you are eating may be plastic rice from China. The red hot tikha lal chili powder may be mixed with brick powder. The most enjoyable of the sweets to eat made of khoya may be contaminated with blotting paper. Festive time is feku time…

When I lived in Bombay for more than a decade I used to come across the “Made in USA” label all the time. It was not only the ‘Made in USA’ label but also fake copies of popular Indian consumer products with the label ‘Made in USA’. At that time ‘Made in USA’ did not mean made in the United States of America. It meant Ulhasnagar Sindhi Association. At the Kalyan Station which is the main junction before you reach Mumbai, most of the soft drinks sold under the name of Pepsi or Coke were fake.
You did not even get time to check as the trains stopped for a few minutes and you assumed that it was genuine. Similarly in Mumbai and on the train to Mumbai there would be vendors selling the complete range of items from laminated greeting cards to cigarette lighters made in USA. In the pathway from Flora Fountain to VT station in Mumbai there would be a number of vendors selling fake tape recorders and watches. The bulk of the goods and sales were of sachets of milk powder, shampoo and sugar pilfered by waiters and housekeeping boys from five-star hotels.

Ulhasnagar was a small refugee colony of Sindhis allotted land close to Mumbai, when they were forced to leave Pakistan and come to India. The Sindhis spread all over the country from Delhi’s Khan Market to Ulhasnagar which till three decades ago was slum. The Sindhi’s are such an enterprising community that they can imitate everything. The formula followed was very simple. They bought a copy of the original item, whether it was irons or radios, stripped them down and learned to remake it with much cheaper parts. There was nothing they could not imitate and most of the cosmetic items that were sold in Mumbai and other metropolitan cities were ‘Made in USA’. But soon they went up-market and started manufacturing genuine products. Which is why most of the richest industrialists in the world mostly based in Hong Kong like Harilila are Sindhis.
The monopoly of USA over Nakli goods did not last for very long. They were soon taken over by the Japanese and the Chinese. China has a greater population than India. It has a large market of young people who have high aspirations. What does it matter if the laptops do not have the original Apple logo. Even the nakli Apple gives them some prestige and some sense of satisfaction. Just as in Goa, dozens of well known brands of liquor manufactured for domestic tourists are of very poor quality. The strategy is simple. They are manufactured locally and sold under names similar to that of original products.

There are two categories of nakli products. The first of them are those who people know are fake and still buy them for the sake of prestige. These are like the fancy digital watches which you buy from the Panjim market which stop working in a week. But there are a lot of poor people who are deceived into believing the items sold are genuine. This is because they do not know the difference between basmati rice and ration rice. Those who eat basmati are in different category from those who eat ration rice. A friend recently picked up some very good looking rice in a local store for as little as ` 40kg. It was selling loose. Despite her suspicions she bought it only to discover that it was from China and very plastic like. The risk of being cheated have become even more widespread with online sales. Even the best brands including original top class Chinese brands are duplicated. So also in India, where there is a war going on between multinationals like LEVERS and NESTLES, which make genuine products, there are wars going on between genuine industrial houses and imitators in China. The fake online sellers are even better than the Nigerian conman.
The big difference between Japan, China and India is that Indians do not upgrade the quality of the products. Companies in China, which started off with cheap imitation goods improved the quality and reputation and began to compete Internationally. It is quite widely known that almost 80% of the components that go into the I Phone are made in China. It is not JIO but a Chinese company which leads the 5G market. This Chinese company took part in the competition for setting up 5G networks in India by the Department of Tele Communication.

There are fears within JIO that the Chinese company might destroy them like they destroyed Airtel and Idea. Reliance, while introducing 4G had promised that it would never charge for incoming and outgoing calls to any networks. It has now started charging Rs 6 per minutes excepting within the Jio network. The latest balance sheet of RIL reflects this showing a fall in the revenue of JIO.
Even the best companies have been accused of cheating. The Volkswagen company was accused of rigging the emission meter only during tests so that they would have to pay less emission taxes. Many famous automobile brands including Hyundai have asked to recall their cars because of faulty air bags which refused to open. It is now the question of US and Europe competing with China and India. Which is one of the reasons why Donald Trump is reluctant to give H1 B1 visas for employment in the US. Companies like Infosys and WIPRO send far more highly qualified engineers to whom the US would have to pay much more. Moreover they learn the technology and return to India to start their own companies. Over 60% of the top employees in Silicon valley in California, where the IT industry is based are Indians or Chinese including the head of Microsoft. Till recently even the CEO of a consumer product company Pepsi Coke was run by an Indian lady of Tamil Origin Indira Nooye.

In a globalized world it is all a question of competition. Companies undertake manufacture in a country where the labor and the raw material costs are the lowest. Even among luxury goods there are genuine luxury goods and fake luxury goods. The lifetime of luxury goods is very short. So those who were aware that fashions change like the tide prefer to buy false luxury goods rather than real ones.

The reason why India lags behind is because we are not as hardworking or obsessed with technology as the Chinese are. Indeed N R Narayan Murthy, who started Infosys, claimed Indian were among the laziest people in the world. The norm in highly productive countries is 12 to 14 hours a day. While in India we think 8 hours a day is too much. In the developed countries they believe in the principal of working extremely hard and relaxing equally hard. For five days a week they work 14 to 16 hours per day. While unwinding completely over the weekend. Even their concept of relaxation is not lying down in bed and watching a video but outdoor activities like hiking, long drives and visiting picnic spots.
The festive season is particularly is dangerous in India. It is boom time for the fekus. It is not only the Chinese who make plastic rice and other cheap products. Almost 60% of the food stuff available in the Indian market is Feku. Most Indians and all Goans love chili powder. Most of them are not aware that chili powder is adulterated with red brick powder. The most contaminated products are sweets, particularly the Gulab Jamuns and Ras malais made of khoya. Repeated surveys by the Food and Drug Administration have revealed that the Khoya is adulterated with thickening agents like flour and blotting paper. It is widely known that ice cream is contaminated with blotting paper. So while wishing you all a very happy Diwali please check both the raw materials and the finished products that you eat as they may be very injurious to your health.