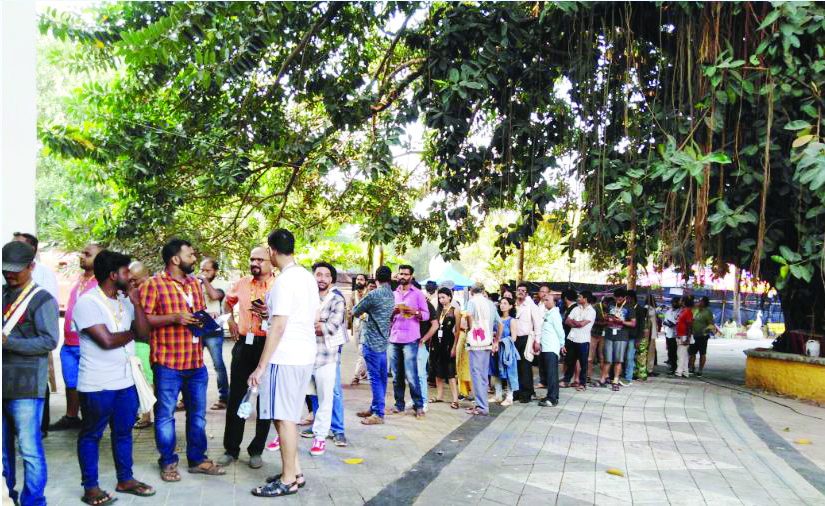 If there is no other way one would like to see films except on the big screen then there is no question of not being in love with the International Film Festival of India happening in Panaji, Goa. TARA NARAYAN, an IFFIgoer residing in capital city Panaji, says she welcomes IFFI despite the good or bad news…

SIGH. IT’S a long, long way from IFFI 2004 to golden jubilee IFFI 2019 and this can only be a very subjective overview of this year’s golden jubilee Indian Film Festival of India in Panaji and Goa. Like it a lot or a little or not at all, regardless of whether IFFI has finally arrived or not, IFFI is here to stay. There is no doubt about it that if you want to see the champagne of films contemporary and classic and if you’re of the older generation preferring to see films on the big screen…IFFI is a treat like no other (that is if you like me accept that books, films and technology are the three greatest educators of our life and times).
Somewhat grudgingly I acknowledge that with digital or online booking and cancelling of tickets to see as many of the films scheduled in a dozen odd places indoors and outdoors — IFFI has finally arrived. I’ve seen IFFI improve bit by bit with good news and bad news. This year with the introduction of online booking and cancellation the powers-that-be at first banned rush queues permitting IFFI-goers who didn’t book tickets to occupy vacant seats.

But after a storm of protest at the various venues they relented and ticketless delegates were allowed to enter the auditoriums once the film started rolling…(sigh)…some of them creating a rude distraction with their swinging hand phone torches, till someone in the audience shouted in incensed frustration, “Put off the light your jerks!” Can anyone educate delegates into the fine art of how to use a torch with some discretion while entering an auditorium when a film has already started rolling?
Okay, what’s some baggage of a hitch here or there. IFFI will always be too good to be true in the sense that there will always be room for improvement for flawless viewing of films! The delegate registration is quoted at 12,000 but I dare say this is an inflated quotation — closer to the truth is 7,000 something delegates and without the large cinema-loving contingent of students, adults, men and women and seniors in tow from the three states of Karnataka, Kerala and Tamil Nadu, possibly making up more than 50% of IFFI delegates, there would be no IFFI in Goa! Our southern states are far more addicted to a diet of cinema than our northern states, someone ought to do a study of this.

I reckon IFFI is good business, the main business of selling and buying films made during the course of the year (and in India we make something like 2,000 films small and big, while Russia makes a hundred and small European France makes 200 films or so). With IFFI and delegates in town there is revenue of accommodation booking in small, four and five-star hotels around about the two main venues in Panaji; VIP delegates will holiday with family and friends in 5-star resorts far away from Panaji. Rajnikanth and entourage for example is said to have booked at the Leela down south Goa and one Dorothy who was part of his entourage confided in me that the much-adored cinema icon was not only being felicitated at this year’s Golden Jubilee IFFI, but he had sponsored a whole lot of friends to come down to Goa. He being an incredibly generous sort. Would I like to interview him? I would, but it didn’t come through.
Rajnikanth was here with his wife Lata who is a film actress of note in Tamil cinema.

This is to say quite simply IFFI is here to stay in Panaji and Goa quite simple because everybody likes an annual week’s filmi holiday in Goa! For a little more than a week the one main thoroughfare of six-street Panaji town pretending to be a city — the Campal Promenade (officially Dayanand Bandodkar Marg after the first chief minister of Goa) — came alive with film delegates toing and froing from the INOX complex to the Kala Academy and this year there was also the Porvorim INOX complex (a shuttle bus provided to IFFI delegates). Campal Promenade with its akaash neem trees in glorious silvery-white floral blooms cascading down with a faint scent in the afternoon air is always a treat to walk down…and during IFFI fever season it is always a pleasure to do some sightseeing in between catching films to clean up one’s jaded senses or so to speak.
It depends on whether one managed to see the best amongst the best of films contemporary or yesteryear. My senior friends speak traumatically of getting up post-midnight to book their tickets on line for films they must see — and confessed to being exhausted but triumphant when confirmations clicked in! Those like me who didn’t have the patience, time or dexterity to book and cancel online stood at booking counters and sometimes were told, “Sorry, the films you want to see are house full!” Leaving me to wonder if I should join the rush queue or see whichever film was going a-begging for viewers. For example, the tedious long-winded Chinese film Summer is the Coldest Season’, don’t know how I sat through it late one evening! EvenScandinavian Silence’ was a second choice for me and saw it despite not wanting to see it. So it went.
There was considerable activity post-dusk down the Campal Promenade with films being screened outdoor under the stars at Miramar beach at one end and partying going on at the Panjim Gymkhana. In fact, one could have confused the Campal Promenade done up with luminescent fairy lights strung up everywhere at lampposts and trees lining the avenue as a glamorous boulevard in gay Paris! Or so went one of my thoughts during golden jubilee IFFI fever time this year. IFFI is the one real holiday I seek as a Panaji resident when even the hubby looks on in disgust at my comings and goings, leaving him to fend for himself for whatever meals he can rustle up on his own.
I’ve lived through 15 IFFIs as media person and film lover in fits and starts — and seen it grow bigger and bigger. Although an IFFI veteran friend of mine says the fizz went out of IFFI some years ago and this time there was no fizz at all, I say oh no, give it a chance, some more chances…once there’re half-a-dozen more auditorium complexes like Kala Academy in Panaji then IFFI would have really arrived in Goa! Plus, Film City, plus Film Village, plus all the film stars owning their own homes in Goa, plus more Goans taking a shine to viewing films and making films, plus, plus, plus. I must note here that this year’s golden jubilee International Film Festival of India took place in the hottest ever November in Goa! And yes, there was no standing up for singing the national anthem before the screening of each film this year.

At a mid-IFFI press conference the amiable CEO of the Entertainment Society of Goa which partners Directorate of Film Festivals, PIB and I & B Ministry, in organizing IFFI, Amit Satija, put some interesting statistics before media people to make up their own minds about the success or failure of IFFI in Goa.
This year 300 films from 76 countries were scheduled for screening. Mr Satija revealed they had printed 10,190 delegate cards. The highest category were cine lovers numbering 4,817. The rest were made up of 1,227 professionals and 1,852 students for whom IFFI attendance is for free. The delegate fee has changed and still is at 1,000 although late registration may make it1,300 or so depending on day of registration.
By mid-week about 53,000 film tickets were used up. An amusing statistic for food for thought: About 1,000 to 1,100 delegates used at least one ticket they booked per day, while 2,100 to 2,500 used two tickets a day, 3,500 three a day and 5,500 to 6,000 four tickets per day. Quite a sizeable 25% to 30% who booked tickets didn’t turn up see the show! It was this which made it necessary to restore the rush lines which were done away with to begin with this year. But delegates who met with “House Full” signals chose to stand in rush queue at show venues in the hope of being allowed in courtesy vacant seats.
Coming to media they had registered 640 electronic and print but most daily media generally doesn’t have the luxury of viewing films like other delegates, quite simply because they’re busy with the comings and goings of film celebrities walking the red carpet and attending press conferences hosting filmmakers anxious to promote their films, and filing their copy for their respective media from the media room set up specially for out of Goa media people although local media too liked using the media computer sections set up at the ground floor of the Old GMC building. DFF staff offices were ensconced on the first floor and here too the 1.30 pm Open Forum meets took place — to discuss a gamut of issues to do with the film industry, presumably still one of the lucrative industries of India.