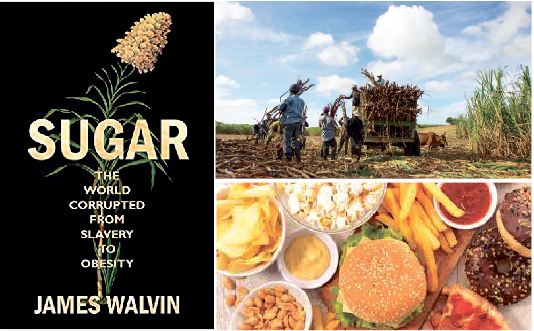 Oh, we are so hung up on sugar! Read the billion dollar sleaze story of how one of our first industrial ingredients became a household favorite …and you’ll never want to even look at sparkling white sugar ever again! Sugar is a chemical and is everywhere in our food industry be it biscuits, confectionary, soda drinks, sherbat, take-away foods, etc. Cheap carbohydrate killers all!

Excerpted from ‘Sugar, The World Corrupted From Slavery To Obesity’ by James Walvin….

THE taste for sweetness in food and drink is universal, and the cultivation of sugar is global. A great variety of sugar cane is cultivated in the tropics, while sugar beet is cultivated in temperate regions. But the engine behind the rise of sugar’s popularity was cane sugar. Its early history in Indonesia, India and Chin, was small-scale and aimed solely at local markets. But when sugar cane was transplanted to plantations in the Mediterranean, then into islands in the Atlantic, the story changed – and even more dramatically when sugar crossed the Atlantic to the Americas, there, sugar cane was cultivated and converted to sugar by enslaved Africans (themselves shipped across the Atlantic). It was this slave-grown sugar that brought about revolutionary changes in the landscapes of the sugar colonies while transforming the tastes of the Western world.
As Europeans and Americans settled and traded with the wider world in the course of the nineteenth century, they transplanted commercial sugar cultivation to new locations to islands in the Indian Ocean, to Africa, Indonesia, to Pacific islands and to Australia. But wherever sugar took hold, local sugar planters had problems with labour. They found the answer in imported, indentured labour. From one sugar region to another – from Brazil to Hawaii – the sugar plantation became the home of alien people – people who had been uprooted and shipped vast distances to undertake the grueling, intensive labour on sugar plantations.
For all that, sugar plantations more than proved their worth to their owners and investors. But there was a price to pay for the development of the sugar plantation. The natural environments were hugely damaged by the development of sugar. From Barbados in the 1640s to the Florida Everglades in recent years, the ecological harm caused by sugar plantation has been enormous, and is only now being fully recognized. It is, however, the human cost of sugar cultivation which is most obvious and dramatic. It is at its most visible in the labour force, from the first slave gangs in sixteenth century Brazil through to indentured Indian labourers in Fiji, the Japanese in Hawaii or the `South Sea Islanders’ shipped to Australia in the late nineteenth century. Cultivating sugar cane was a harsh business, and it was the labour of slaves and indentured labourers that transformed sugar from a luxury item to an essential commodity. Within the space of two centuries – roughly between 1700 and 1900 — – sugar became a dietary essential for all sorts of people the world over.”