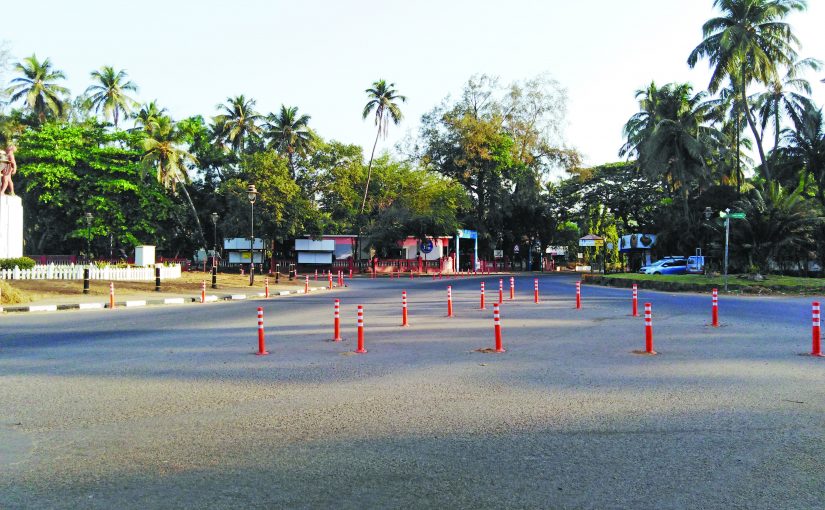 It was a breathtaking closure in Panaji…Capital city Panaji and Goa closed down for the major part of a week in a breathtaking bid to dissuade the novel corona virus from taking root anywhere, an account by Our Special Correspondent (Pics by Tara Narayan)

At first nobody believed such a 24-hour closure was possible! Call it fear or a windfall of freebie holidays falling in the lap. Depending on whether you’re employer or employee. But as fear percolated into the conscience of everyone about the manner in which the pandemic is sweeping across the world and right here in India and Goa (mercifully no positive cases to date at time of writing this) all took the call seriously for a weekend (March22 & 23, 2020) bund, euphemistically called a voluntary curfew.
Everyone took the call. Say it was the fear of death dancing before their eyes as news from Italy, Spain, Iran and the other badly affected countries swept in courtesy high-pitched television news and social media…perhaps it also revived a new respect for life which most of us take or so much for granted. Can this Chinese virus (it was created and spread from China) blow out the light of life so easily and quickly? Why take chances, the fear touched everyone. Everyone wants to live. Who wants to die!
Rich or poor, living in big homes or hovels downtown in places like Dempobhat where old-timer gaunkars and Nepali and Kanadigga migrants live cheek by jowl in dingy rooms with dismal sanitation….all stayed put ever since the voluntary “Janta Curfew” was announced by the Prime Minister Narendra Modi on in Delhi and Chief Minister Pramod Sawant on March 20-21 and further extended to March22, with big business houses announcing closures till March 31, 2020.

Capital smart city in the making Panaji witnessed a rare sense of obedience during the weekend, then came the official orders to add on another three days on Sunday evening….I couldn’t believe it and on the very first day morning took a bike ride out down town Panaji to find it looking like a ghost town. Where were the human of the species? Lots of dogs lounging around the streets, crows and pigeons partying around plastic bags if garbage put out by whoever but the CCP cleaning folk were too incarcerated in their dwellings.
Later around 8am a few folk were to be seen in their cars taking a scouting around ride; some walking briskly; some wondering if they could find a place to pick up some food – nope, all closed. But yes, here and there in small-time hotels the kitchens were working and with shutters down a quiet business was helping people out with breakfast.
Here is a photo essay, it is just the beginning of whatever you want to make of it! Everywhere people are spooked, wondering how much of the curfew to obey, how much to take with a pinch of salt – but by and large most are beginning to realize that life is all about the survival of the fittest. And the question arises, who is fittest?