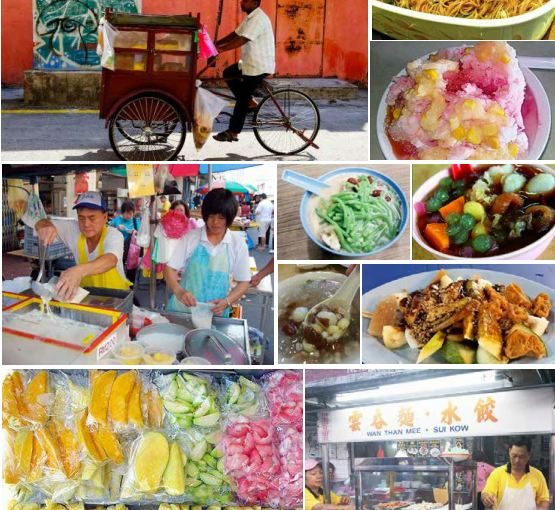 IN THESE days of coronavirus fears and even otherwise dare I suggest we return to the old vendors system operating down every street but yes, food vendors have to be educated in hygiene and sanitation, licensed and checked regularly. Penang’s Food Department authorities were very strict and I don’t think I ever got sick eating street vendor or hawker food before or after school! I remember relishing “nasi pulut” in triangular fresh green banana parcels (that is sticky rice topped with choon ball), mouthwatering “mee goring” packed ingeniously in banana leaf and tucked into place with little stick…and so much more. Steam-cooked Chinese buns with all kinds of stuffing within, “bubor chacha” which was my favorite breakfast, and “lye-chee-kang” …a bowlful of swirling tinkling in ice fruit like lychee, papaya, Thai mango, tender coconut ribbons. Oh for a lye-chee-kang on a hot afternoon…
I don’t mind returning to Penang one more time to have my fill of all these street vendors’ food one more time…before saying goodbye kind or cruel world! But the thought of writing some of my foodie memoirs here this week is to say during these coronavirus times it would be a good idea to promote old-fashioned food vendors plying the streets so that one may buy whatever one wants to feed mind and body, heart and soul; not for fancy but reasonable aam aadmi pricing. There’s a decent living to be made somewhere in all this, okay. And walking or bicycling never hurt anyone!
How about a decently made “batat-poha” or “bhelpuri” or “pongal-avial” or even stir-fried rice and Manchurian balls served up on a bed of fine cut cabbage…how about “sannam-choon”, “amboli-choon”, zitt coddi, all freshly made food to be sold out the very same day? CCP can take a call on this or the Food Department of Panaji city! CCP Commissioner Sanjit Rodrigues could very easily swing this idea through. Think how much less plastic litter there would be for this would be like retailing food in your own home dibba or bartan…whoever wants to think about it may think about it, including the powers-that-be up there where it counts to make a difference to the quality of public life at street level in Panaji. Come on, set a good example!
ARE the street vendors of my Penang memories still there some 50 years later? Well, my resident brother and family there tells me most have been told to take up permanent rented out space in the organized collective eating food courts attached to public recreation places, but now I’m told there’s a Penang residents’ movement afoot to get foodie vendors back plying their food down and up the streets…the authorities are also considering giving some interested vendors license to ply their fresh food item numbers in the interests of getting children off plastic packet junk food from supermarkets.
I would say good-luck to any such movement to bring back freshly prepared food and snacks into people life the easy way! We would be eating better at street level and it’s a livelihood for those who want to take their chances in a competitive area which makes a difference to life for young and old alike. I mean if the local poder bakery produce can get around, why not other kinds of freshly prepared traditional foodie item numbers?