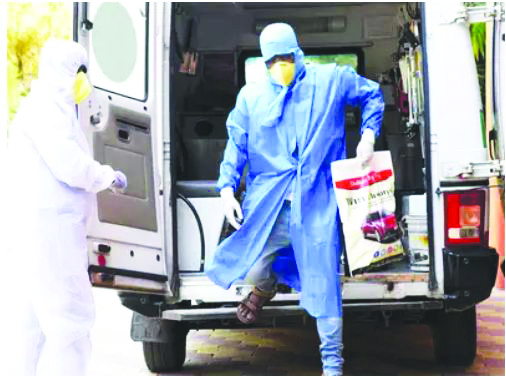 CRACKED: The shield has been cracked and the coronavirus has entered Goa. Atleast so far all 52 odd Covid-19 patients are outsiders and all the seafarers who were repatriated to Goa, mercifully all have tested negative

GOA has lost the distinction of having been the only coronavirus Green Zone in the country. We are the only State which till recently managed to keep the deadly coronavirus epidemic infection out. But now our defences have been breached and Covid-19 has slipped into Goa with 52 positive case out of which seven are cured. Goa is no longer a Covid-19 free paradise. I only hope that this will not turn all Goans into bhaile- haters. I keep forgetting that whenever any niz Goenkar is angry with me even I who have spent 37 years in Goa become a bhaile (or ghati)!

FOR a long time while the rest of the country was mourning its losses Chief Minister of Goa Pramod Sawant was in a great mood. The Chief Minister of Goa kept boasting that Goa continues to remain a Green Zone. Through all the national lockdowns Goa did not throw up a single positive case of coronavirus. That there has been not a single confirmed death due to Covid-19. That Goa had lived up to its reputation of being a green island in an ocean of Red Zones and Orange Zones! The coronavirus could not cross the nakabandhi that had been put up by Pramod Sawant at the Maharashtra and Karnataka borders.
Ironically, it is when the relaxations started with every successive lockdown that the shield gave way. May be there were Goans outside who were waiting for Café Bhonsle to reopen to have their puri-bhaji. May be as the rumour goes the bold and the beautiful and the rich and the powerful are sneaking in across borders areas to take shelter in green Goa. Indeed, there have been rumours that tourism promoters who will do anything for a quick buck are promoting Goa as the green exception to the red menace of Maharashtra and Karnataka. Believe it or not before the coronavirus pandemic fears broke out tours for Western tourists used to be conducted of the world’s largest make-over slum in Mumbai!
It is a reversal for tour operators to shift from filthy over crowded glaring Red Zone Dharavi to Green Zone Goa. Apparently, people are so desperate to escape to Goa that they are seeking little know entry points as if through backdoor lanes in the hills which smugglers used during the Portuguese colonial regime once upon time.
The theory is that Goa remained green through the spreading canvas of red particularly in western India because it followed a policy of isolating itself. Goa did not permit anybody from the neighbouring states to come into Goa because of the lockdown and national closedown in the initial three phases too. There were objections even when Goan seafarers who had finished their terms aboard their ships at sea had signed off and wanted to return to Goa, but were stranded because of the lockdown. Goan sailors on cruise liners including our own cruise liner like Angriya owned by Captain Nitin Dhond was not allowed to dock at the MPT. All the Goan seafarers who were desperate to re-join their families were forced to disembark in Mumbai and then be driven down by bus to Goa and isolated in hotels for 14 days of quarantine period before being declared free from any coronavirus infection. There were protests and even riots when people discovered that some hotels in the Calangute-Candolim belt were being used to hold Covid-19 suspects in quarantine.

Officially it is being admitted that there are 23 Covid-19 patients in Goa who have registered positive. Pramod Sawant is insisting that they all are bhaile and there is not a single case of a Goan being tested positive for Covid-19. This is being strongly contested by Porvorim MLA Rohan Khaunte who claims hera pheri and facts being hidden. According to Rohan there are already at least 40 Goan Covid-19 patients and we will soon be hitting half-a-century. The charge is that the testing is very casual and the official figures released are understated. The CM of course sticks to his theory that it is the bhaile who are spoiling the coronavirus-free reputation of Goa. To the extent that he has requested the Railway Ministry not to have a Rajdhani Express stopover in Goa. Sawant is also against any interstate movement of trains or buses between the neighbouring states Maharashtra and Karnataka and even individuals driving in four-wheelers are required to have official permission and undergo tests at the border costing `2,000 per person.
ANGRY SEAFARERS

THE Goenkar seafarers are angry because in the first place they feel they have a right to be berthed in Goa from where they can directly go on to a home quarantine. But according to regulations they have to sign off in Mumbai and be driven by bus to Goa, undergo a quarantine of 14 days in a government designated hotel/institution and subsequently spend another 14 days in home quarantine. Some of them still stranded on luxury cruise liners feel they are more comfortable on their ships than go through the torture of being quarantined before they can get back to their home and family. Unfortunately, seafarers worldwide are in the same situation as almost every country is in a lockdown because of the coronavirus pandemic.
Every country is in lockdown but very few countries have lockdowns which are so strict and harsh as in Goa and India. The only time that you may not be harassed too much is in the early morning hours if you’re going out to get daily essentials like milk and vegetables. But beware if you are not wearing a mask! It is extortion time for the police. Earlier one heart that officially the fine for not wearing a mask in public was Rs1,000. It has now come down to Rs100. My better three-quarters had taken off her helmet and kept at the footboard but a Pandu hawaldar pulled her aside, insisting that even if she quickly took up her helmet and put it on she pay the fine! If you have your helmet, it must be on your head and not at your feet. Police are always ready to haul a citizen up for chai-pani money.
In the first and second phase of the lockdown there was a tough crack down on young people out on the roads late at night. In Taleigao some policemen had fun forcing migrants to do “murga” punishment for not having helmets on. Which is not surprising because migrants are the favourite bakra for police, if the policeman had dared to pick on a local Goenkar it is more likely he would have been made to be a murga by the Goenkar!

Personally, I feel disgusted by all such petty punishments inflicted by some policemen to exercised their authorite and amuse themselves. I am very angry about the humiliation of migrant workers not only in Goa but the country over. The worst case scenarios we hear of are coming from northern states and especially Uttar Pradesh. Why inflict any beating up on jobless migrants walking home, thirsty or hungry and in total despair as they struggle to get back by road to their native state? Imagine using a fire engine hose to disinfect groups of these workers with their kinsfolk including children with liquid sanitizers. Would you treat your own brothers and sisters in such an inhuman fashion?
These are the workers who built the monstrous palaces the rich and privileged live in. They put up the 50-storeyed buildings of Goregaon and other Mumbai suburbs. They built your factories. They once laid the foundation of the roads on which they are now being forced to walk down while trucks roar pass them. If I was younger and healthier I would catch that police inspector or health inspector or whoever official in charge and bash him up! I don’t understand why our Indian workers take all the nonsense. I don’t understand why they don’t revolt. I don’t understand why they don’t assert themselves. They are also citizens of India. They have a greater right over the roads than you have because they build them.

WHAT right does the sahib and memsahib sitting in their penthouse flat in a 60-storyed building to pass judgement on their bai who they probably treat like a slave? During the lockdown phases domestic maids suddenly became like untouchable for fear that they may carry the coronavirus on them. By that logic is not the watchman equally untouchable or does he wear personal protection equipment not to protect himself but to protect the sahib and memsahib.
In Goa, we Goans have fought many battles. We have liberated Goa from Portuguese colonial rule. We have fought the Marathi lobby which tried to merge Goa with Maharashtra. We fought to retain our unique and distinct identity. We fought to make our mai bhas our raj bhas. We fought to get the Regional Plan 2021 scrapped. We fought to eliminate the Special Economic Zones. We fought the mine owners polluting Goa for decades and creating treacherous bad lands and waste lands. Surely as independent self-respecting people we should protect our working class migrant people? But for them we would not get our fish. But for them we will not get out chicken or beef. Even the vegetable and flower markets in Goa are controlled by the bhaile workers. How can we tolerate the ill-treatment of the bhaile workers?
When we need them we chase them and beg them not to leave because we need their labour! But when our work is done they again become kachra. Thank God Goans are not treated in a similar fashion in the Gulf and in the UK where they are doing jobs similar to what the bhaile workers do in Goa.