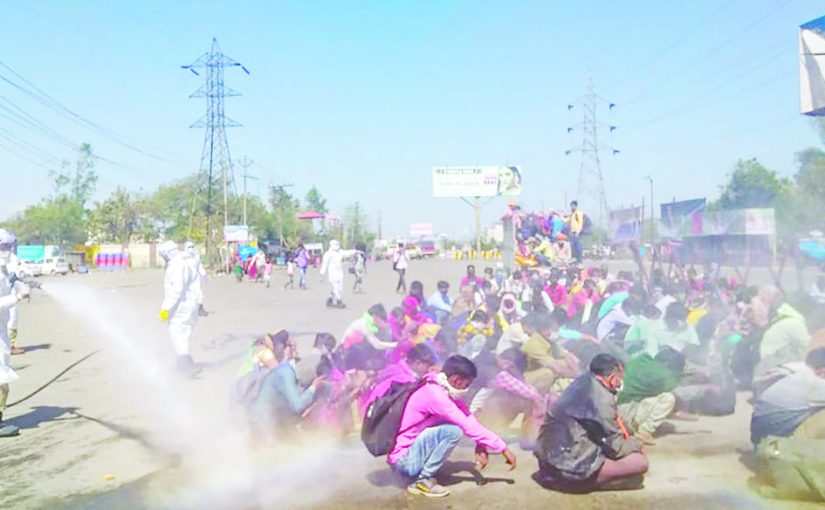 HUMILIATION: Migrant workers are being sanitized with chemicals as if they are some stray dogs in Uttar Pradesh!

Finally, the migrants too have decided that they have their self-respect. They have equal rights as citizens of India. They have a greater right to the highways which they built….

A survey of migrant workers found that four out of 10 labourers did not have ration left even for one day and 90 per cent had lost their only source of income over the past three weeks due to the lockdown.
Ramesh Kumar, 33, had packed his bags on Monday night hoping he will be able to return home the next day. When Prime Minister Narendra Modi, in a televised address to the country, extended the national lockdown till May 3, he broke down.
Kumar, a construction worker in the city, hails from Muzzafarpur in Bihar and has been stuck in a camp in Haryana’s Ambala ever since the sudden imposition of the lockdown. “I thought this will be over on 14th and I’ll go home. I have no idea how my family back at home is. Food is a problem here. People in the camp are getting impatient and frustrated now,” he said Kumar.
Kumar’s mention of rising dissatisfaction among migrant workers was manifested hours after Modi extended the lockdown.
Close to 1,500 labourers gathered at a bus stand in Mumbai’s Bandra on Tuesday afternoon demanding transport arrangements to go back to their native places. Most of them also complained of having no food.
Similarly, hundreds of migrant workers sat on the road in Surat’s Varachha area on Tuesday evening, demanding that they be sent home. This was the second time within four days that Surat witnessed protests by migrant labourers. On April 10, as many as 80 migrants were arrested for going on a rampage and setting on fire several vegetable carts. They wanted to return home in Odisha.
Protests had also broken out in Kerala, New Delhi and several other states during the lockdown period.

Uprising in the Making?

News18 spoke to migrant workers across Haryana, New Delhi, Maharashtra, Telangana and Kerala. Almost each one of them expressed the same helplessness and brewing anger for not being able to return home and having to spend their days in squalid, makeshift accommodations.
Food is the foremost concern. Most of them are surviving on one meal a day and others are completely at the mercy of expected good Samaritans.
For Uttar Pradesh’s Manohar Kumar stuck in Hyderabad, rice and starch double up both as dinner and lunch. “I don’t know for how long I will have to be here now. I have very limited resources, I need to spend accordingly,” he said.

Kumar is a construction worker and is current staying in a makeshift shanty setup beside the building he was employed for construction in.
There are several other workers from different states staying with him, he informed. “Some of my co-workers are planning to go to the nearest police station and demand conveyance to return home,” he said.
The group is fast running out of groceries. They had planned their expenses keeping April 14 in mind. The national lockdown imposed to curb the growth of novel coronavirus was earlier announced only for three weeks.
A survey of migrant workers by NGO Jan Sahas found that four out of 10 labourers did not have ration left even for one day and 90 per cent had lost their only source of income over the past three weeks due to the lockdown.
Meanwhile, in a government-organised camp in New Delhi, Bhadoi Singh’s phone has stopped working. He has not been able to talk to his family members for the last three days.
“I don’t recall the phone number. My family does not know how I am. I have no idea whether they are safe. The government needs to send us home at any cost. Give us just one day. Provide us transport and lock the country down for as long as you want after that. Just get us home,” said Singh who works in a manufacturing unit in the national capital. He hails from Etah in Uttar Pradesh.
Like several others, he had also contemplated walking home. “I would have had to walk close to 350 km. I decided not to but sometimes when it gets really bad here, I regret not going home,” he said.
The Centre told the Supreme Court last week that between 5 lakh to 6 lakh migrant labourers had walked to reach their villages. Several of them either died from the exertion of the inhumane journey or were run over by vehicles.
A Bench led by Chief Justice of India Sharad A. Bobde was informed by the Ministry of Home Affairs last Tuesday that there are more than 10 lakh people in relief camps. The government-run shelters have 6.3 lakh and those run by NGOs has over four lakh. The number of active relief camps and shelters of the government is 22,567 and of the NGOs is 3,909.
The hearing was based chiefly on a petition filed by activists Harsh Mander and Anjali Bhardwaj, who said that the declaration of the 21-day national lockdown without prior information “precipitated an unprecedented humanitarian crisis” for migrant workers.
The rising resentment in these camps is a reflection of the arduous days that the inmates have had to face in the last three weeks.
“There has been no income since the last three weeks. At a time when the entire country is fighting a global pandemic from inside their homes, with their families, we are left to rot in a faraway camp where there is shortage of food and water,” said Tinku Prasad, a daily-wage labourer who was part of the crowd that gathered at Mumbai’s Bandra on Tuesday evening.

how long to wait?

“We thought transport will begin from Tuesday. How much longer are we supposed to wait? We cannot be here till May 3,” he added.
Not just food and accommodation, these migrant labourers may also be left out of central schemes meant to assure food security.
Finance Minister Nirmala Sitharaman had announced last month that 1kg dal will be given free to beneficiaries of free food grains. The Pradhan Mantri Garib Kalyan Ann Yojana will ensure that each one will get an additional 5kg rice or wheat per month in addition to the existing scheme. However, the problem lies in ration cards and accessibility to fair price shops.
The food distribution through fair price or public distribution shops may do little in benefitting the migrant population since we do not have a nationwide portability of ration cards yet. The portability enables beneficiaries to receive their share of groceries and food grains from any PDS store in the country, irrespective of which state or district their card is registered to.
The Centre has rolled out the ‘one nation, one ration card’ initiative in 12 states, but crores of migrant labourers who are finding it difficult to return home, mostly from different states, will get no benefit.
Khemchandra Banjara, a migrant worker, has been stuck in Jaipur. He hails from Bina in Madhya Pradesh. “I went without food for two days. I had to literally beg in front of the police officers to give me something to eat. I will be able to access ration shops only once I get home, which for now seems really difficult,” he said.
Bhagwan Das, 44, is also a migrant labourer and is currently stuck in Haryana’s Rohtak at a temporary shelter with 200 others. He needs to reach Mahua in Uttar Pradesh.
“All of us have almost been starving. Whenever somebody comes, we ask them for food. Some give us, some don’t. This is by far the toughest time I have ever seen,” he said.
Das has a bank account and a ration card. But his card is registered to a fair price shop in his village, hundreds of kilometres away.

In an interview with News18, eminent agricultural scientist MS Swaminathan said rural India is not prepared for the pandemic. He further elaborated that mass exodus of migrant labourers will severely hurt the economy. Experts were of the opinion that if a solution for labourers is not devised soon, there may be more protests and possible clashes.
Maharashtra Tourism Minister Aaditya Thackeray on Tuesday blamed the Centre for the protest by hundreds of migrant workers near Bandra railway station.
In a series of tweets, Thackeray said, “The current situation in Bandra, now dispersed or even the rioting in Surat is a result of the union government not being able to take a call on arranging a way back home migrant labour.”
Similarly, BSP chief Mayawati slammed the Centre and the state governments for the problems that migrant labourers had to face.
Talking about migrant workers, she said, “Almost 90 per cent of them are Dalits, Adivasis and from other marginalised communities, and the rest of the 10 percent are poor. The states in which they were stranded did not stop them from going back to their home states due to their mentality towards them, they (state governments) did not even make efforts to provide them with their daily needs,” she said.
Meanwhile, for the next 19 days, while most Indians will be inside houses waiting to emulate the next social media trend as yet another activity to pass time, there will be lakhs left to the mercy of others, unsure about their next day’s ration, away from family and friends, cooped up inside hostile camps in the middle of a global pandemic and bare bodied to every form of infection.