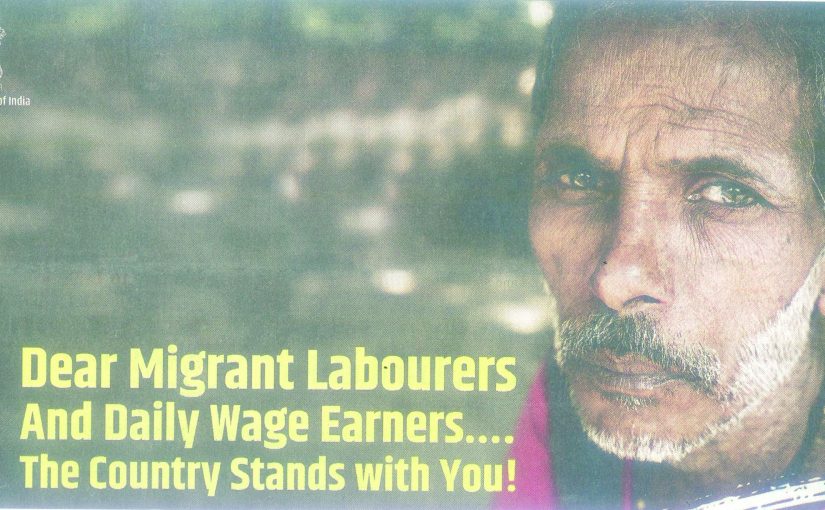 Prime Minister Narendra Modi has released advertisements offering `20 more under MGNREGA (Pradhan Mantri Awas Yojana-Urban) promising to introduce affordable rentals. When will this be implemented? Will these schemes remain like the other promised schemes that Narendra Modi has made to his “pyaare deshwasiyo”?

In a huge colour advertisement which I’m sure appeared in every registered newspaper in the country (excepting for the Goan Observer) the PM offered a package of 1,01,500 crore under MGNREGA. Which is a scheme introduced by the late Indira Gandhi to guarantee at least 100 days of work in a year to the unemployed. At a fixed rate of182 per day. Narendra Modi’s generosity is that thanks to his due of 1,01,500 crore those who were unemployed will now get30 more per day taking their wages to 202. Mind you MGNREGA does not promise you daily wages for 365 days per year but for only for 100 days a year. It has never been explained how the unemployed will earn any money for roti, kapda and makan for the rest of the year. Addressing his working brothers and sisters Narendra Modi has announced that any needy person even without ration card has the right to avail food grains for two months. To avail rations not just for two month but for a lifetime needy persons only have to bribe the concerned officials. Narendra Modi has extended the items available under the ration card to 5 kg/rice and 1 kg chickpea/pulses. In another act of great generosity Narendra Modi has declared that labourers who are forced to move from their villages to other villages or cities where rented accommodation may be beyond their means, a Pradhan Mantri Awaz Yojna has been created for rural housing complexes. This will no doubt be like the promises made to small medium and micro industries that they would be given loans promptly by the nationalized bank to overcome the difficulties of the lockdown crises. Many decades ago soon after Independence the staff of the public sector hotels in New Delhi went on strike. Among them were all the government-owned hotels including the Ashoka, which was considered the most luxurious hotel in the capital city where a cup of tea could cost you much more than202 (the new wages fixed MGNREGA). A leading socialist leader Mohan Dharia led a protest against the most expensive hotel in the country. He gave thousands of slum dwellers the minimum amount necessary to have a cup of tea.

NORMALLY, it is the tradition that if you go to have a cup of tea in a 5-star hotel they don’t ask you to finish quickly and leave as in humble Udupi eateries. The price includes the right to spend as much time in the hotel as you want. From 6am in the morning the socialist leaders arranged for the slum dwellers to march up to the hotel, have a cup of tea and hang around till mid night. Batches and batches of slum dwellers occupied the entire 1,000 rooms hotel. Neither the management nor the police could do anything about it. After all they were honoured customers paying for their cup of tea.
Similarly, it is the migrant labourers who build all the highways and bridges, including the late Manohar Parrikar’s favourite project the Atal Sethu bridge. It is the migrant labour who build all the most luxurious building complexes in Goa. They are the ones who build the Aldeia de Goa mega gated complex at Bambolim on the outskirts of Panaji. They are the ones who build all the Models gated housing colonies whose office bearers refuse to permit maids to work in the flats of the residents even if they are senior citizens during the lockdown. They were the ones who build INOX and renovated the Kala Academy for the International Film Festival of India. They are the ones who build the huge towering Patto district to enable the Economic Development Corporation to make several crore of rupees.
The government and the builders seem to have a problem. The government has not been able to pay the advertising dues for advertising issued for IFFI which was held in November last year, long before the lockdown was enforced on March 22. As the Indian newspaper owner society told the Supreme Court the State and Central government owe the media over `1,500 crore by way of unpaid advertising dues released long before Covid19 came along. Since those who released the advertisements are debtors of the media should we perhaps all go occupy the INOX theatre and all the IFFI buildings 24×7 till our dues are paid? After all this is what the banks do if there is any delay in paying EMI on a loan you have taken to buy a scooter or a car.
The builders seem to have an equally major problem. The moment the lockdown was declared they stopped paying the daily wages of their workers. As the result the daily wage earners could not pay the rent of their cubby holes rented out by mundkar, who in turn are victims of the big landlords or bhatkar. The builders who have become crorepatis on the sweat, blood and labour of the migrant workers claim they do not have money to pay the few hundreds of rupees they used to pay workers for working on flats selling for a minimum of Rs1 crore and more!
Should not the labour have the right to occupy the gated colonies and Aldeia da Goa and Ocean Park and all the Model complexes on which they laboured 12 to 16 hours per day just because they were victims of a Covid19 lockdown for which they were responsible? They did not refuse to come to the work. They were not permitted to come to the work by the government of India so that they do not infect sahab and memsahib with infection. The poor builders do not seem to be able to follow Prime Minister Narendra Modi’s advice that they should compensate the workers for the lockdown period when they were without shelter and food. Or as the Supreme Court pointed out the money to go back to their home towns.

MAY BE we in the media who are in the same boat as migrant labour should help the builders! Give us each a full page color advertisement for our publications. We guarantee that we will arrange to ensure that at least one family is able to go back to their home town. More importantly we will ensure that the police do not take any action against the migrant workers for occupying the buildings they built for which they are not being paid for!
After all the media also has to survive. And in good times when the government wanted publicity or builders wanted publicity they were willing to release double spread full page advertisements even on the front page of newspapers. There is of course the risk that the government will send the ads and newspapers happily carry them, but there will be no payment made. There is no lockdown for the release of ads. But when it comes to paying for them the lockdown is applicable to the government and builders.

We wonder whether the Central government or its agency the Department of Audio Visual Publicity will pay for the Dear migrant labourers… ad or the builders who in the past have advertised in the Goan Observer will pay for the ads they released in a reasonable time. Indeed, this time around we had made it clear that no lockdown would be accepted on payments. As far as the government is concerned if only there is enough unity amongst media houses they can bring the Central and State governments to their knees by refusing to give them any publicity. In fact, I suspect that Narendra Modi is addressing his migrant brothers and the daily earners through advertisements because nobody would carry press notes sent by DAVP!