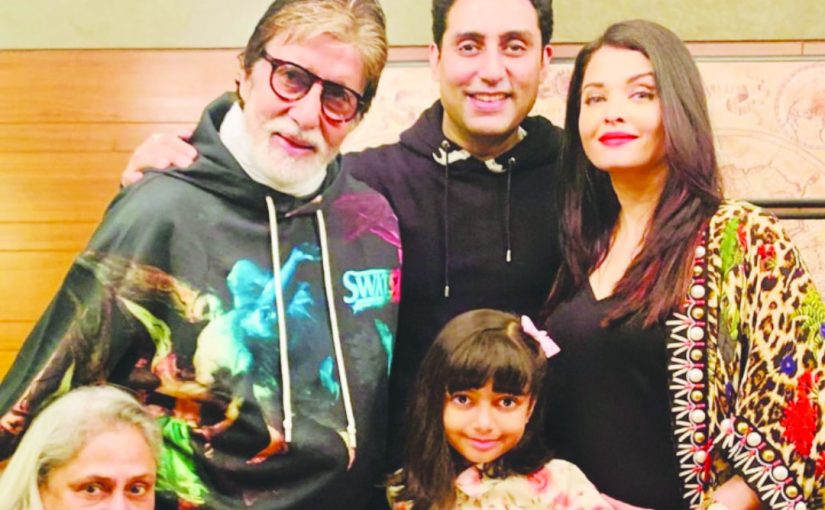 THREE GENERATIONS: Three generations of the Bachchan family including grandfather Amitabh, son Abhishek, daughter-in-law Aishwarya and grand-daughter Aaradhya have been infected by Covid-19. Curiously, Amitabh’s old friend Rekha has also isolated herself. Rumors in Bollywood are that Amitabh was infected by Rekha’s bodyguard

The media is going viral on three generation of the Amitabh Bachchan family catching the Covid-19 infection. Not just the media even Prime Minister Narendra Modi and senior political leaders have been sending messages for their speedy recovery. Is anybody paying any attention to the watchman who is alleged to have infected Amitabh Bachchan. Or considered the possibility that it was Amitabh who may have infected the watchman!

ALL the focus in the media seems to be on three generations of the Amitabh Bachchan family being infected with Covid-19! Those infected include superstar Amitabh Bachchan himself, his son Abhishek, daughter-in-law Aishwarya and grand-daughter Aaradhiya. Curiously, some viral film reporting online initially reported that Rekha (once romantically linked with Bachchan) has also isolated herself somewhere! The real or fake reports do not confirm or deny whether she has Covid-19.
So are we here witnessing an action replay of the controversial film Silsila which featured both Jaya Bachchan and Rekha competing for the attention of Amitabh Bachchan in the film? Nobody is talking about the poor watchman who allegedly infected Amitabh Bachchan. When a celebrity is infected it inevitably makes it to the front page of all the newspapers. This is not related to the stars of Bollywood and Tollywood but even the politician stars Ritesh Deshmukh, son of a minister in the Maharashtra cabinet. It is always presumed that it was the watchman or maid who transmitted the infection to the celebrity. The possibility that it could be the celebrity who infected the watchman or maid is never considered!

In fact, the most high risk jobs at least as far as Covid-19 is concerned seems to me to be that of being watchman or maid servant to celebrities. In Mumbai a very elite high rise gated colony in Nepean Sea Road would be equivalent to those who stay up the Bambolim Road which connects upmarket Dona Paula circle to the posh residential complex of Aldiea de Goa. But the Mumbai building suddenly reported a high rate of infections of the bold and the beautiful, and the rich and the powerful, who stay in flats and pent houses costing 10 to20 crore. In this case too people who are blamed for infecting the saheb and memsahib, not to mention the babalog and babylog were domestic staff like maids, watchmen, deliveryman of various services. The assumption being that all service people living in slum colonies are more likely to catch the infection than the big shots who can’t manage without being serviced by maids watchmen etc. For some strange reason watchmen are trusted more than domestic maids.
In all the gated colonies and the so called Portuguese Villas which may old houses may renovated by the superrich, there are always watchmen. In big gated colonies which have multiple entrances there can be as many as ten watchmen working on shift duty 24×7. In the gated colonies of Model’s Millennium or Gera Astoria at Caranzalem nobody may enter the building till the watchman “shoots” you with thermal gun to confirm whether you are infected or not. Some even insist you give your name, telephone number along with who you are visiting. These same apartment blocks which seem to trust their watchmen on duty around the clock do not seem to have much faith in maid servants coming in and out. During the Covid-19 lockdowns the majority of gated colonies did not permit maids and sometimes even car drivers into the complex to visit residents.
It is not only regular servicing folk who are banned from entering the colonies where the bold and the beautiful, rich and powerful stay. You will be in deep trouble if any of your electrical gadgets or consumer durables break down. Plumbers, electricians and their like would have to be personally vouched for by flat residents being allowed to come in and repair washing machine or expensive LED television sets. Most may even have to take their broken consumer durables out in the car to get them repaired at showroom or whoever does the repairing of such luxuries. But even that may be a problem if you are not amongst those who drive their own car and are dependent on freelance drivers.
What most managing committees of gated colonies of so called Portuguese villas do not realise is that watchmen are the most unreliable for a series of serviced providers. I do not know what the scene is in Mumbai and other major metropolitan cities. But I have personal experience of how companies which hire out watchmen function. Very few watchmen are trained. The majority of them for some strange reason are from Orissa or Odisha nowadays as the state is called.

Indeed, all manner of people who get down from a train or a bus in Goa is hijacked by recruiters for security companies. The only training perhaps is how to salute the owners of the flats or villas! Forget about thermal guns watchmen do not even know to use a lathi. They have no training in karate or any of the martial arts.
I recall that when the BJP government withdrew the personal security officers provided by the police to me after I was savagely beaten up during my oHeraldo years in 1989, later I’d asked one of the security agencies to send a watchman at least to our office. Since Goan Observer carried bold stories very often we used to be threatened. There was an occasion when a busload of supporters of the parish priest of Colva came driving down to attack us because we had carried a story alleging that the priest may have appropriated money on renovation of the church. I discovered that instead of preventing the shouting parishioners from coming inside the office the watchman was hiding behind them. Even worse, many watchmen supplied by security agencies in Goa do not know how to speak any language apart from their own native language, not even a smattering of Hindi or English.

Despite the fact that very few of the watchmen have any experience or training, most housing co-operating housing societies and gated apartment colonies seem to trust them more than the domestic service providers! Part of the reason why watchmen may be incompetent is because they are very poorly paid. On an average a watchman is paid only `8,000 for a 12-hour shift. So not surprisingly only the migrant labour take up jobs of watchmen. Gone are the days when Gorkha (Nepali) or at least ex-service men (retired from the armed forces) made up the bulk of watchmen.
The watchmen, unlike their bosses or members of a residential society’s managing community, are posted just in one place. They do not socialise or meet dozens or hundreds of people like the owners living in villas and bungalows and premium apartments do. So much so the bold and beautiful and rich and powerful are far more vulnerable to getting an infection than the small employees and daily wage earners. As far as maid servants are concerned many of them have been working for families for years if not decades. I have seldom heard of maid servants stealing anything from their employers even if nobody is keeping a watch on them.
The worst victims of the lockdown and Covid-19 are the poorest sections of society. In Mumbai for instance, the majority testing positive are residents of slums including largest slum in Asia, Dharavi. In Goa the outbreak started at Mangor Hill in port town Vasco da Gama which is virtually a slum. Similarly, the other areas which have reported ten plus, plus infections are areas like Chimbel, Indira Nagar, Zuari Nagar slum areas near Verna industrial estates.
The majority of the 15 who failed to recover are from poor families. Goa unlike Mumbai does not have any celebrities testing positive. The only so called VIP reporting positive is MLA of Cuncolim Calafasio Dias who is still in the ESI hospital in Margao in a reportedly fairly critical condition. Since nine other Congress rebel MLAs and Chief Minister Pramod Sawant himself had several meetings with him there were rumours that they were returning to the Congress because they were infected! At least one MLA, the Calangute MLA, is under quarantine.
Unfortunately, all over the country and in Goa people do not take the warning of not holding getting together for celebrations seriously. In Karnataka and Andhra Pradesh ministers and local MLAs attended weddings and others functions with hundreds of their supporters wishing them, no social distancing being observed at all. The rule in force is Section 144 which bans the gathering of more than four people at any place or time. This is observed more in the breach than the law.
Goa seems to lag behind other states when it comes to contact tracing. In simple words, contact tracing means trying to identify all the people that somebody who reported positive has been in contact with. The manner in which Goa has been creating containment zones is also affecting both business and industry. Unlike in Mumbai and elsewhere only the specific building or an area within a radius of hundred meters is declared a containment zone, which means there is a total lockdown here.
In Goa containment is done arbitrarily. For instance, at least three industrial units have been forced to shut down because one of their watchmen tested positive for Covid-19. This leads to disruption of industry and loss of production. The worst hit are pharmaceutical units like Tulip Pharma. Containment should be limited and the entire area should not be in lockdown to inconvenience other residents.
The Bachchan family members been admitted to one of the best hospitals in the Juhu area, the Nanavati Hospital, and will no doubt get the best treatment. The daughter-in-law and grand-daughter have been permitted to remain in isolation in their own palatial home. I only hope somebody is taking care of all the watchmen and domestic servicing folk being accused of infecting superstars of Bollywood.