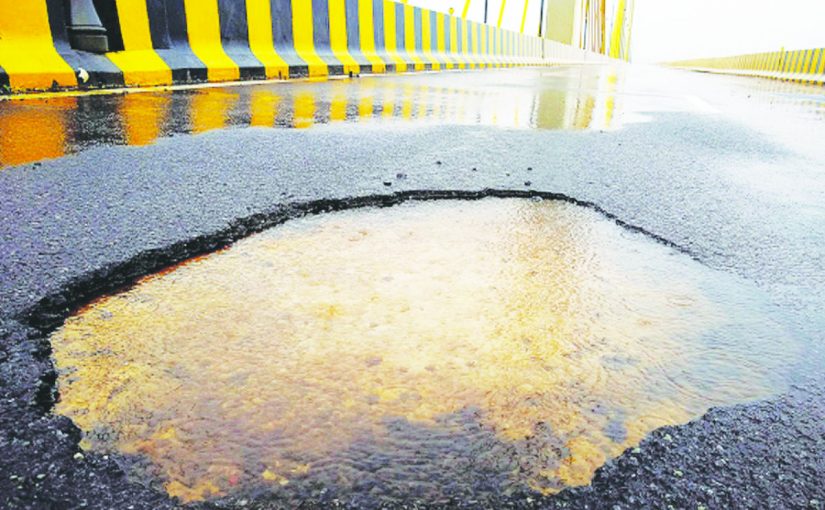 SHATTERED: Even in death there is no peace for the late Manohar Parrikar as his pride and joy, the Atal Sethu bridge, made by the most reputed engineering company Larsen & Toubro, has started cracking.

AND a few stray thoughts on some relief both for the government and for asymptomatic patients in urban areas. Let it first be clarified that asymptomatic patients are those who do not display any symptom like high fever and coughing or cold or even test positive. In any case given the fact that there is no space left at the ESI Covid Hospital in Margao and strong resistance from locals to the setting up of Covid-19 care centres in their backyard, the government has decided to allow urban patients to treat themselves at home, an idea technically called home quarantine. What in effect this means is that people who have large houses and resources to pay for doctors and nursing billing for home attendance need not undergo the torture of being forced to stay in a government hospital. Even in the normal course our middle class and rich are reluctant to go anywhere near a government hospital given its poor hygienic and sanitation status.
The conditions at ESI Covid-19546+ Hospital in Margao is even worse since it is littered with discarded PPEs, gloves and masks worn only once for six hours. There are however conditions for availing of the home isolation facility. The concern patient or his family have to make an application to the collector/ deputy collector. The application has to be emailed to the concerned collector, depending on which district the patient stays. Every application also has to be accompanied by an undertaking voluntary self-quarantine with medical guidance online. The concerned email IDs are given in this issue of Goan Observer in Covid-19 Timeline.
If permission is granted to patients to self-isolate at home for 14 days from the day of testing positive for the coronavirus infection, a Health Officer normally ensures that the patient has a room to him/herself with an attached toilet. The toilet that is used by the patients cannot be used by any other members of the residence. This of course rules out the majority of the not only poor but lower middle class who live in 1-bedroom flats with common bathroom-cum-toilet. Under home isolation patients have to be in touch with a caregiver who is considered a link between patient and Health Officer in charge.
Ward representatives are also required to regularly inspect the house to ensure that the patient follows all the conditions laid down. Mercifully in an emergency the duty of shifting the patient to the nearest health facility lies with the State administration. Certain categories of patients like those over 60 years of age or those who are in dialysis are not eligible for home isolation in the case of Covid-19 infection. It is recommended that the patients stay in a Covid-19 care facility.

AND a few stray thoughts on how coronavirus situation has not affected the student population of Goa. Both at HSSC and SSC level results of which were announced on Wednesday, July 29, the pass percentage was higher than in the previous year. A record of 92.08% cleared the SSC exam which is marginally higher than pass percentage of 2019. As has been the tradition in Goa the girls did better than the boys, with many of the 9,620 girls who have appeared having 8,973 or 93.37% pass for the exam, whereas in the case of the boys the percentage was only 92%. As many as 118 schools including 35 government run schools secured 100% results for class 10 as against the 98 schools which scored 100% results last year.
It would seem that Covid-19 is good for our students at least as they seem to have done better during Covid-19 times than in normal times! The simpler explanation is that because of the lockdowns students are forced to stay at indoors at home to study, for they could not go out. Moreover since the parents are also at home they could help supervise their children.
While students will no doubt be happy with the results in 12th and 10th standards there is a nightmare in store for them in the coming academic year 2021. Nobody is clear how the shift from classroom teaching to online teaching is going to work out. While students appeared to be happy enough with the idea of studying online from home, now the teachers are also demanding that they should be allowed to teach from home. If there is a total shift from school teaching to online teaching may be the schools including the Cujira school complex can be transformed into a Covid-19 health centre. The government itself has admitted that nearly 40% of the students in government primary and middle schools do not have either laptops or smart phones and nor do they receive the range for online lessons. Among the proposals being considered is a tie-up with Doordarshan so that lessons can be on television.

AND a last stray thoughts on the irritating fact that everything has become digital. No doubt Generation Next is delighted with the world going digital and 5G coming aboard. These last few months for almost anything and everything one has to catch it online. Involving the downloading this app or that app concerned so that services could be provided. It does not matter if you are required to downloads apps for ordering food or clothes or your next mobile.
But for those who do not have computer or are computer illiterate it becomes a big burden. I just discovered that in Covid-19 times if I want to go to Mumbai or Bangalore even for 24 hours I have to fill an online form and my permit will also be issued online. There seems to be no other option. The assumption that we are a 100% digital country like those in Europe and the United States is totally absurd. Our infrastructure from switching to digital is pathetic. The national internet network run by the State-owned BSNL does not provide range even within 100 meters of its own head office, leave alone in the small villages of Goa. We have to concentrate on creating the infrastructure before insisting people do all transactions digitally.