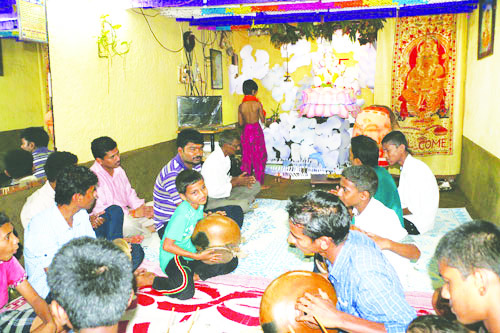 RESTRICTED: Even the number of pujari who can participate in Ganesh puja is restricted. Indeed, Health Minister Vishwajit Rane from Valpoi has suggested the postponement of the celebration to February 2021!

Chovoth is the most festive occasion of Goa, bringing together members of the family from far and near to celebrate Chovoth or Chaturthi. Regrettably, this time they will not be able to gather en masse to welcome Lord Ganesh or to participate in puja or give Lord Ganesh a visarjan goodbye…….

HISTORICALLY, chovoth has been the most important festival in Goa on the Konkan coast. It’s a festival which brings together the entire extended family. The tradition in Goa and the Konkan is that only one member of the extended family is permitted to install Lord Vinayaka in the family ancestral house. The rest of the family of brothers, their families, cousins and relatives come from the country and world over to spend a week or ten days of Chathurti festivities together.
Chovoth is the exact opposite of what Covid-19 implies. Covid-19 is determined to keep people apart. Covid-19 bars the gathering of more than a maximum of four people. The detailed Standard Operating Procedure (SOP) even stipulates that they height of the idol cannot be more than four feet and that not more than six people may carry and install Lord Ganesh. This year strict rules have been laid down for pooja and immersion in water bodies. Ghumat aarti and Satyanarayan pooja which are highlights of Chovoth in Goa have been more or less banned this year. Lord Ganesha is invoked first in any auspicious Hindu function or celebration because he is believed to be the “Remover of Obstacles.” Unfortunately, Covid-19 is the one major obstacle that Lord Ganesh has not been able to overcome.

LIFE SHOULD GO ON

We think Covid-19 or no Covid-19 life should go on. Of course life is important but so is education. Though the government of Goa has announced the re-opening of schools from September 1, 2020 there is total confusion about how they will have to impart education. We find it difficult even to bring out the Goan Observer weekly every week without making half-a-dozen complaints to the BSNL office on the quality of Internet breakdowns every now and again. There are large parts of rural Goa which have no Internet connection at all. To expect students from lower middle class homes to read or take instruction from teachers on smart phones or television or laptop screens is absurd and irresponsible. In the first place should children be entrusted with smartphones and allowed to use them without supervision? If the students are to do online learning in the presence of parents the classes will have to be conducted in the evening when parents returns from work. Zoom classes are catching on in the private well to do schools though we are told.

COVID-19 cannot be an excuse for closing down the Courts and holding sessions of the District Court and High Court online. Admittedly dangerous criminals and witnesses have testified through video calls! But given the range unless special arrangements are made even this is not practical. The Chief Justice of the Supreme Court has left it to a panel of seven judges to decide whether normal functioning of the courts should resume. But given Covid-19 guidelines to maintain physical distance and strict hygiene in the form of using sanitizers or whether it is practical to accommodate all concerned parties in the courtroom is a moot point.
In any case, normally there is the accused and the plaintiff, they are legal representatives, the witnesses if any and the court officials. Given the size of our District Courts there will be no place for all those with a stake in the proceedings to be accommodated in the court.
All said and done life must go on for it cannot come to a stop until the vaccine for coronavirus is found. There are many claims of vaccines being developed or found and the most reported vaccine is the one from Russia, which claims to be a fool proof vaccine because it has undergone human trials successfully. But the chief virologist who headed the project has quit, casting doubts on the reliability of the vaccine. A reliable vaccine might become available at some point of time. But with the total number of cases in India alone crossing 25 lakh, we cannot stop all activity until we find an effective remedy against Covid-19 or the contagion disappears on its own.
The economy which is already crippled by demonetisation and GST has been further affected by Covid-19. The GST collections have fallen as trade and business have declined sharply. It is virtually impossible for even large factories to function, let alone small scale units, if they have to comply with the guidelines to safeguard employees from Covid-19. Both management and shop floor worker are equally affected. We cannot substitute employees in factories with robots although some attempts have been done. This is however not practical in the case of medium and small scale industries.
The large industrialised western countries which have already mastered the high-tech techniques of 5G network and data mining may be able to maintain production at the rates prevailing before Covid-19. There is no denying the fact that there is a sharp fall in consumption. This has affected the cash flow of even the biggest companies. With the decline in consumption there has been a wide spread pink slips or dismissal notes. This is the expression used in the countries of the West when people have to be sacked.

IT companies in India which have been among the largest employers have also been the first to retrench employees. These companies have also maintained a tradition of maintaining a large bench strength. This means a backup of employees who are generally fresh graduates from engineering colleges and they are trained in various IT verticals. Even companies like Wipro, amongst the largest IT companies and employers, have decided to do away with their reserve force of engineers. The bench force was primarily intended to quickly mobilize if an IT company has got a large order from a big group. For instance, in the case of conceptualization and implementation of the Aadhar card project executed by Infosys.
Among the major causalities of Covid-19 are culture and entertainment. This includes mega- EDM units like Sunburn which is one of the highlights of the tourism season in Goa. Tourism Minister Babu Ajgaonkar has already given his clearance. It will be known only in December whether the DJ-heavy concert will be a virtual event or a participatory event. Indeed, the world over hundreds of concerts and music performances have been cancelled or converted into virtual events because of Covid-19. An example being the virtual tribute paid to the late fashion guru Wendal Rodrigues in a mega show featuring all fashion designers.
In Europe and the UK, which cannot survive without their daily dose of football, some matches are still being held. Football fans have challenged Covid-19 in the finals of the English League which is won by Manchester United for the first time. The biggest sporting event in the country, the Indian ISL, owned and organised by the Ambanis, is scheduled to be held in Goa from November to March, 2021. This time around all the 96 matches will be held in Goa. Historically, the matches were played on the home grounds of the participating teams on a home and away basis.
But though the entire ISL drama will be played out in the three stadiums in Goa it will all be behind closed doors. This will be the first major sporting event in Goa in pandemic times, it will not be accessible to fans who will have to be content to see it on TV. For organisers and the players and even those occupying a few seats based on social distancing norms, Covid-19 will be the big challenge for the event. Not only the players and referees but even chairperson of ISL, Nita Ambani, will have to get herself self-tested before entering the football stadiums of Goa, namely Jawaharlal Nehru Stadium at Fatorda, GMC Athletics Stadium at Bambolim and the Tilak Maidan Stadium in Vasco da Gama.