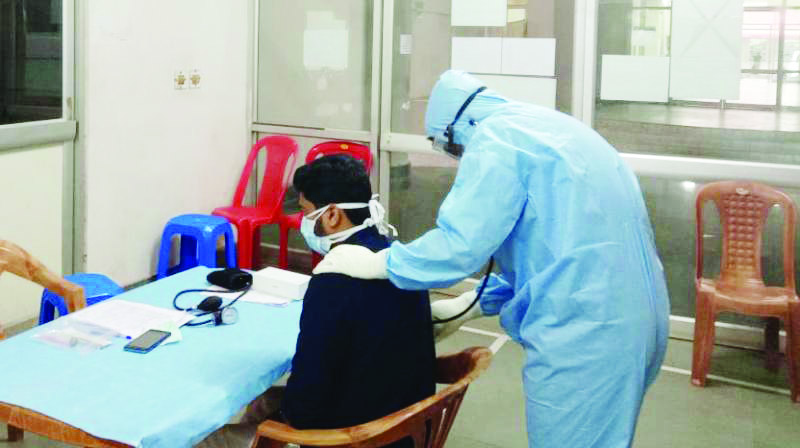 Hyderabad: The sudden death of Covid-19 patients who looked all right just the day before have been noted in all hospitals across India and doctors say people must be aware that such a sudden deterioration can occur as it is the nature of the disease.
Reasons for the sudden collapse are many as apart from the lungs, the heart and brain is also badly affected.
Dr C Vijay Kumar, senior pulmonologist at Apollo Hospitals, says patients could look stable on the surface but they could already be getting less oxygen in the blood. These cases have been noted in all parts of the world and we are seeing the same in our country too, he said.
This condition has been noted in five per cent of cases, which go on to become serious and require critical care. Preliminary clinical data in India shows that the five per cent serious cases in hospitals are in the age group of 40 to 60 years.
It is a misconception that people above 60 years are more vulnerable, because as the trend shows in India, they have self-isolated first and are thus better protected. The infected patients are in the middle age groups and the focus is on improving their lung function.
Dr Sandeep Budhiraja, group medical director at Max Healthcare says that “apart from the lungs, the brain and heart must be focused upon as the patient is suddenly crashing. They have a brain stroke or get a heart attack and their deterioration is very quick.”
There are more men than women among this five per cent of critical cases. The co-morbid conditions in India are diabetes, hypertension and obesity, noted in people who are more than 40 years of age.
It is their existing co-morbid conditions that lead to rapid deterioration. Dr Rajesh Chawla, senior pulmonologist and critical care specialist, says hospital data has shown 100 per cent recovery in children and 80 per cent in those whose immunity is strong “and it can be further improved if they take proper precautions and report to hospitals on time.
Low immunity and co-morbid conditions are the cause of concern and every effort must be made to check on oxygen levels now so that they can be treated faster”.

The Congress on Tuesday demanded a judicial inquiry into the deaths of two people who were admitted in the isolation ward of Goa Medical College and Hospital, the state’s designated COVID-19 facility.
Goa Congress chief Girish Chodankar said the two people, including a woman who died on Monday, were in the isolation ward meant for persons with suspected exposure to novel coronavirus. “The two persons were declared coronavirus negative.
Chief Minister Pramod Sawant should make public the autopsy reports of all those who died of respiratory ailments since March 1 this year and clear doubts of people. He should tell us if protocols for COVID-19 deaths are being followed in Goa,” Chodankar said.
“We demand an impartial judicial inquiry into the mysterious deaths in the isolation ward since lockdown was announced,” Chodankar said. He said GMCH authorities should explain why people with respiratory illnesses are dying soon after being brought to the facility, and also explain in detail the line of treatment given to such patients.
“The CM should also clear if nasopharyngeal (NP) swab specimen was taken for COVID-19 test and a separate NP swab for testing of other respiratory pathogens as is the standard procedure globally,” the Congress leader said.
A senior GMCH official said the samples of a person who had died in the isolation ward last month tested negative for coronavirus. “As far as the new case is concerned, the samples have been sent for testing,” he added.