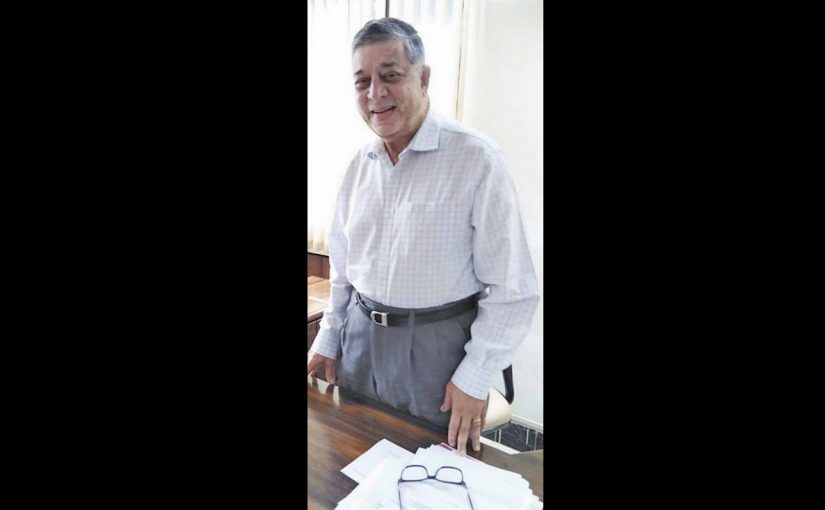 Pharma giant Cesar Menezes: Life is all about working hard and enjoying the fruit of one’s own hard work. Also philanthropic sailing enthusiast, he founded the Goa Yachting Association in 1973 and got Lifetime Achievement Award for an individual’s contribution to the sport of sailing in Goa and India.
He now lives a semi-retired life in the company of family and friends

‘My father Pascoal Menezes was all about working hard, he always used to tell us you work hard, you will get somewhere!’

EXCERPTS FROM A CONVERSATION WITH CESAR MENEZES…

Question: What are your memories of your father Pascoal Menezes? Rumor has it he was quite an autocrat and difficult taskmaster?
Answer: I remember him as a man who was all about work and work, he used to tell us if you work hard, you will get somewhere, he would leave the house at 8.30am, return home for quick lunch, maybe short nap and then back to office. I remember my father’s great friend in those days was Alex Sequeira who gave him ideas about selling foreign goods like Rolex watches, and Raleigh cycles and other such goods.

Q: And your mother?
A: She was a good-natured mother living her life peacefully and quietly, never interfering with what my did. She would not get drawn into family conflicts or gossip, she was a good mother who didn’t come in the way of anyone. She was Elvina Rita Maria Cresencia de Menezes and mother to my sisters Celina and Catherine, and of the sons Cosme was eldest, then I came, after me Carlos and Cedric…

Q: I believe you grew up in the Latin Quarters of Fontainhas in Panaji?
A: Yes, my family hails from Divar Island but in Panaji later on we started out at the St Tome’s Chapel area, later moving on Altinho where I was born and brought up…the CMM offices continued to be at the Ourem Creek area and some of our old offices are still there. Well, growing up in those days was very simple. But I remember there was no flooding in those days in Panjim. The buildings were attached to the footpaths at floor level and the drains were all clean, no plastics also but there was mud which had to be cleared. My primary schooling was at the Irma Clare School run by Portuguese nuns, it was an all boys school and I remember there was one only girls school in English…my secondary schooling was at the Lyceum at Altinho where the High Court came up later.

Q: What kind of social life did you enjoy growing up into a young adult?
A: We were usually at the Club Vasco da Gama or Club Nationale dances for any relaxing. What else was there to do?

Q: You married early?
A: Yes, very early when I was 22 years old. I married in 1970 and moved out of my parent’s house at Altinho. My wife as you know is Mimi, or Dr Maria Emelia Menezes, we were friends for many years. We have two daughters Divya in Florida and Rashmi in Mumbai, my young son Prateek passed away at the age of four of Erwin’s sarcoma, a very rare bone cancer…my wife Mimi takes care of our company CSR including the Prateek Menezes Memorial Foundation which offers help to poor children with cancer in collaboration with the Tata Memorial Hospital in Mumbai.
The CMM Polyclinic at Altinho was also founded by my father and we take care of it on a no loss, no profit basis charitable clinic.

Q: After the division of the CMM empire you inherited the pharma companies, something close to your heart?
A: Yes, for many years we brothers Cosme, Carlos, Cedric and me worked for my father and acquired mutual respect for one another. I think I was most independent and after moving me around to different companies my father must have chosen Wallace Pharma as best for me because he thought I would do well …you must understand from where my father is coming, he was 27 years when he had to take charge of the early family from his father, my grandfather. People died pretty young out then and the responsibilities were great, I remember my father took care of his brothers and in fact paid for everyone he considered family. He always used to tell us if you work hard, you can go up in life! I have imbibed his philosophy.
We have Wallace Pharma and Indy Pharma with several associated companies and manufacturing units in India…abroad in Florida my daughter Divya is the managing director of Goodwin Biotech company, my son-in-law is also running the company, the climate is very good in Florida. Amongst other medicines we manufacture anti-cancer and pain management medicines and a lot of researched products which are on clinical trial.
Wallace also has a plant in Himachal Pradesh where drugs for diabetes, gastrointestinal, rheumatoid, pain management and other medicines are manufactured. We have drugs to stop the degeneration of the knee cap…we have companies in Ponda in Goa, Dharwad, Vapi in Gujarat, also Sangli and Hubli. Our product range is about 200 now, mostly generic pharma products.
When I took over Wallace was maybe a 5 crore company and today it is a400 crore company. Perhaps this means I did good, following my father’s advice to work well to do well…

Q: As the years catch up with you?
A: I’ve 99 percent handed over all my company shares to my two daughters. So you may say I am relaxed now and can take it easy, making myself available to those who run my companies and if they want to consult me! (Here it is time to wind up our conversation and I realized later I’d forgotten to ask him about his great passion for sailing. Cesar Menezes is a keen sailor and over half-a-century has contributed greatly to promoting the outdoor sport of sailing in Goa. He is president emeritus of the Goa Yachting Association which he founded in 1973 with Dr Erlich Menezes and friends.)

IT is not often that one gets a chance to talk with Cesar Menezes who is the distinguished son of a distinguished father. His father was the reportedly memorable, colourful Pascoal Jose de Menezes of CMM empire fame and fortune, who from all accounts lived life with flamboyantly and many are the stories about him and Goa. For some time now whenever I bumped into Cesar Menezes I’ve been appealing to him to go down memory lane for me. Most times Cesar Menezes was reluctant to do interviews or even to go down memory lane but one day to my delight in an accidental meeting he said, okay, 2.30 pm is a good time to meet up with him at his office. His office is at the Dempo Trade Centre, Patto business district in Panaji, make sure I don’t go off to Dempo Towers which is also nearby!
In his office on his desk taking pride of place is son Prateek Menezes’ photograph. The loss of his son suffering from bone cancer when he was barely four years shattered his and wife Maria Emilia Dias Menezes’ heart…but they are blessed with two daughters, Divya and Rashmi Menezes and they more than make up for the loss of their only son. Cesar reminds me he is not the eldest son of Pascoal Menezes like some people think in confusion (his is such a large family with its own cemetery on Divar Island from the family hails). He is the second son who inherited the pharmaceutical division of his father’s business empire.
They were four brothers — Cosme, Cesar, Carlos, Cedric — sons the late legendary, pioneering businessman Pascoal Jose de Menezes who ruled his family with a firm guiding hand or so to speak. This is yet another of Goa’s rags to riches story of how a small-time drug store which opened in 1910 during Portuguese-ruled Goa went on to expand into an empire importing all kinds of goods in the pre-Liberation years like Gillette’s blades, cosmetics which Hindi film industry stars like Nargis were very fond of and which were banned in Nehru’s India…as also later, post-Liberation of Goa, setting up manufacturing plants in Goa and across India.
It was Cesar Menezes’ father Pascoal Menezes, who in no mean way laid the foundation of Goa’s industrial growth with the CMM group of companies. His sons followed in his footsteps after the patriarch passed away at the ripe old age of 95 in 2005. Soon after distributing his empire to his various family members including his four sons and today the family thrives like a beehive with children, grandchildren, moving into fourth and fifth generation. Cesar Menezes who inherited the pharmacy business of Wallace has taken the company to new success, along with Indy Pharma and a host of other companies.