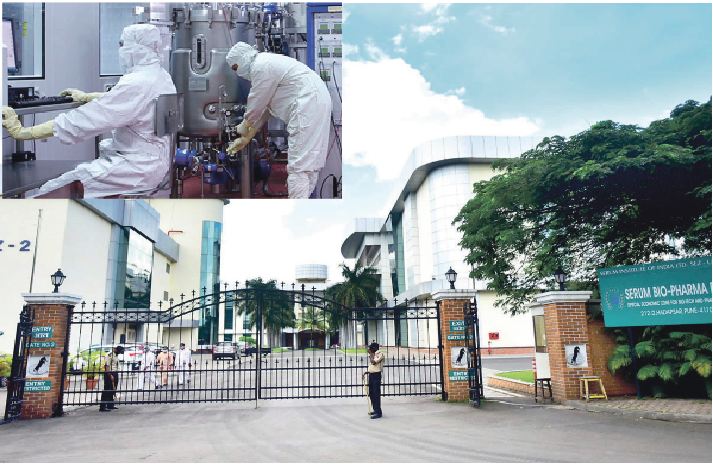 PIONEER: It is the CEO of Serum Institute of India, Adar Poonawalla, who has been responsible for testing and manufacturing the Oxford vaccine in India. Poonawalla insists that Covaxin is backed by 200% honest clinical trial.

Besides concerns on whether the poorer sections of society will be able to afford the vaccine, a war has broken out about the safety of vaccines. The All India Institute of Medical Science Director Randeep Guleria defended the clearance of the vaccine by the Food & Drug Authority even before the testing procedures were completed. This was in reaction to Dr Guleria making a crack about Covaxin being only a backup and not the vaccine of choice to prevent infection….

There is no clarity on whether a COVID-19 vaccine, whenever it is ready, will be free of cost for everyone in India and it being so would depend on the outcome of clinical trials underway to test the vaccine, said the head of the committee overseeing vaccine development as well as planning its distribution.
“We’ll have more clarity in the weeks ahead when trial data from the ongoing trials (phase 3) of the Serum Institute of India (which is testing the Oxford AstraZeneca vaccine) is available. The success of it and the other candidates will determine the availability and the dosage required and then we can discuss financing. The next three weeks will yield clarity on this,” said Dr. V.K. Paul of the NITI Aayog, who heads the Centre’s expert committee on vaccines. He was speaking on the sidelines of a press briefing on Tuesday.
At the briefing, in response to a question from The Hindu, Dr. Paul said that “for the foreseeable future” it looked like “resources wouldn’t be a problem” in making vaccines available for free.
“Consultations are on; we are drawing up blueprints in trying to work this out. We have requested States to keep the national interest in mind in questions of vaccine prioritisation and availability,” he said.
Last week, Tamil Nadu Chief Minister Edappadi K. Palaniswami said, when ready, the vaccine would be administered free to everyone in the State. The BJP’s poll manifesto in Bihar promised a free vaccine to residents. Union Minister Pratap Sarangi said in Bhubaneshwar that a vaccine would be free across the board.
Though the government provides several vaccines free to children and pregnant women under its National Immunisation Programme, the sheer scale of the pandemic and complex international financial agreements undergirding vaccine development and deployment, mean that there’s uncertainty on the actual costs to the Centre.
The Gavi Covax Advance Market Commitment scheme, involving nearly 180 countries, is a mechanism to ensure that a vaccine, whenever ready, is equitably available globally. The scheme requires $2 billion to be able to ready 2 billion doses by 2021 and so far commitments by countries total nearly $1 billion to ensure access to high risk vulnerable groups. India’s financial commitment to this scheme is as yet unclear. This is separate from bilateral deals that countries have entered into to ensure access to their citizens.
Government officials have previously indicated that while the vaccine would be free for the poor, it could also retail at as much as Rs 120-140.A person, who’s involved in screening potential vaccine candidates for the Department of Biotechnology, said on condition of anonymity that there are tremendous costs with actually administering vaccine to a person.
“The cost of administering a vaccine could be as much as the vaccine itself. This is a viral vaccine and culturing them is harder and costlier than bacterial vaccines. Also this has to be injected 30 days apart, which is much more expensive than say, the oral polio vaccine. There is a significant cost and somebody has to pay,” the scientist said.
Covaxin, developed by Hyderabad-based Bharat Biotech Limited, and ZyCovD by Ahmedabad-based Zydus Cadilla are two other vaccine candidates being tested in India that are in phase-2 trials, or the step before large phase-3 trials. While the AstraZeneca vaccine is being tested in India, Serum Institute has so far only committed 200 milion doses for India and 92 other low and middle income countries. The actual doses to be made available for India is uncertain.