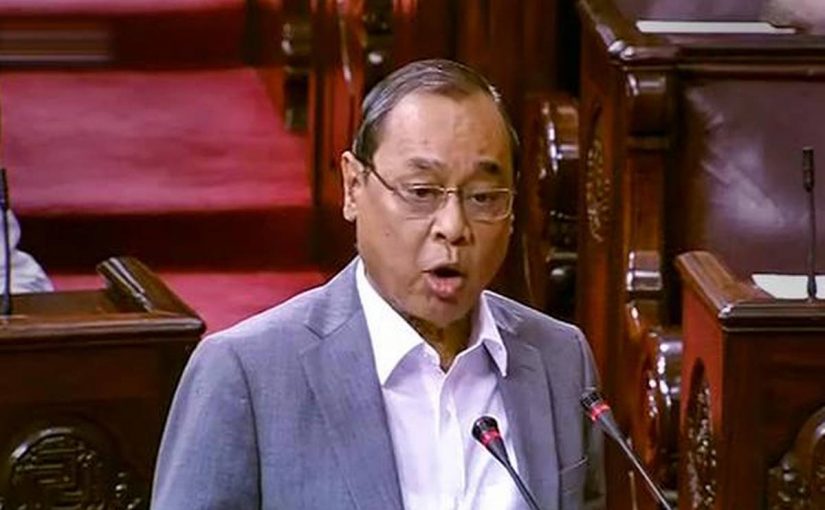 SHOCKING: Former Chief Justice of Supreme Court Ranjan Gogoi has stated that going to courts is a waste of time, except for large corporates. It is unfortunate that a person who has presided over the Judiciary should destroy its credibility. Will he be hauled up by present Chief Justice S A Bobde for contempt of court?

According to former Chief Justice of India Ranjan Gogoi the Judiciary is in a ramshackled state. It takes so much time to get a verdict that only big corporates go to court for it benefits them and they stand to gain. However, the courts are now very quick to take action against those accused of sedition for frivolous reasons!

According to former Chief Justice of the Supreme Court Ranjan Gogoi, it is a waste of time going to the courts. Ranjan Gogoi violated the principle of being chief justice of the Supreme Court of not accepting any favours from the ruling party after retirement. Unlike in the case of even senior bureaucrats who have to wait for six months before they take a private job. Ranjan Gogoi accepted the offer of the BJP for nomination to a Rajya Sabha seat immediately after he retired as the chief justice. The widely held belief is that Ranjan Gogoi will be the BJP’s candidate for the chief ministers post in the next election in Assam, the State to which he belongs.
It is shocking that the former chief justice of the SC, should make a statement to the effect that going to a court is a waste of time. If some media person like me had made a similar statement, I would have probably have been hauled up for contempt of court. Ranjan Gogoi did not limit himself to pointing out that getting a verdict in courts takes inordinate length of time. Gogoi virtually defamed the judiciary by commenting, “How important the judiciary is as a constitutional body need not be emphasised. You want a five trillion-dollar economy, but your judiciary is ramshackled.” Gogoi also confirmed that the only people who found it attractive to go to court were huge industrial houses. Who might get large sums of money if they win. This is why large corporates take a chance of going to court.
It is admittedly true that large corporate houses tend to promptly go to court against decisions affecting their interest. We have had several controversial cases in Goa itself. When the five-star hotel Cidade de Goa, was held guilty of violating CRZ zone rules it promptly went to the Goa bench of the Bombay High Court. When the Goa bench upheld the charges of the CRZ regulatory authority, the Cidade de Goa management challenged it in the Supreme Court. The SC ordered the demolition of a significant part of additional construction that the hotel had indulged undertaken within no development zone. This order for demolition included their banquet hall Grand Sala.
Despite the SC judgement, the then Chief Minister Digambar Kamat retrospectively amended the law to save Cidade de Goa from demolition of the alleged illegal structures. There are many other five-luxury star hotels including the Bambolim Grand Hyatt which have cases pending against them in the SC. The hotels which violated CRZ rules continue to function under a stay order in the confidence it may take years if not decades for the SC to deliver its judgement.
Sayanora Telles Laad, who was a senior civil judge in Margao District Court, agrees with the view of Ranjan Gogoi. Sayanora believes that arbitration is a much better and quicker option. Sayanora has shifted from the District Court in Margoa to take up her new assignment as secretary to the Goa Branch of the Legal Services Authority. The authority provides help to those who cannot afford a lawyer. There are literally several lakh of Goans and Indians forced to remain in custody if arrested on any charge, if they cannot provide the surety or pay the bail amount.
There is also an increasing trend to book those who Prime Minister Narendra Modi calls “Andolan Jeevis” under the Sedition Act. Hundreds of farmers and farm activists and even media giants like Rajdeep Sardesai have been booked for sedition. The latest victim is 22-year-Disha Ravi from Bengaluru, who in her naiveté posted two lines from the tool kit put up online by Nobel prize- winner teenage environmental activist Greta Thumberg.

FOR those who may not be aware of what the tool kit is, it is not the kind of equipment that mechanics use or arms that activists may use. The tool kit is just a booklet which gives suggestions on how to generate support for a popular movement like the farmers protest! So there is no denying the fact that going to court, particularly in a civil issue, may not yield quick results. In property cases involving Goan properties being purchased under the Uniform Civil Code, it may take years if not decades. This is because under the Uniform Civil Code which Goa inherited from the Portuguese, half the property of a surviving spouse goes automatically to the surviving spouse. Only the remaining half may be distributed to all the children, male or female, equally.
In the old days couples in Goa had very large families with an average of nine to 10 children. So much so, when an inventory is done the property left by the deceased has to be equally shared amongst all heirs. Which is why so many death advertisements appear in Goan newspapers. It is an invitation to the heirs to come and claim their share. The delay arises from the fact that every heir can hire a lawyer to claim that his share is less than that of his brothers or sisters.
Similarly, when even a few hundred meters of ancestral property has to be sold, it may require a large number of signatures. This is compounded of course by lawyers seeking adjournments. Unless all the lawyers representing the various parties are present in court no decision is taken.

MORE than two decades ago the owner of a courier service company published an advertisement in the OHeraldo’ which I was then editing. The courier owner alleged, in his advertisement, that one of his female employees had misappropriated some money. The courier owner also included the photograph of the girl with another employee of the company. The girl who was well connected filed a defamation case against the courier company. She claimed that the person with whom her photo had been published was not her husband. That it gave a wrong impression about her. Unfortunately, the editor of a registered newspaper is responsible for all the contents including the advertising material appearing in the newspaper concerned. Though the editor has nothing to do with registering advertisements, a job handled by the newspaper’s advertisement department. However, this case dragged on for more than two decades! This was because most of the time the owner and managing director of the newspaper was seldom present at any of the hearings. It kept getting postponed time and time again. I repeatedly appealed to the lady concerned that she should drop me from the charges she had filed against the editor and managing director of theOHeraldo’ as I was not concerned with the paper’s advertising. Finally, the verdict came after more than two decades, long after I had left the OHeraldo.’ To cite another instance, unfortunately, defamation cases are personally against the person who is the editor when the alleged defamation took place. In my case after two decades I was acquitted and the lady even apologized to me for putting me to so much inconvenience. In another case, involving theTimes of India’ (Mumbai edition), a retired highly respected editor, Girilal Jain, was charged with defamation in Goa by artist Dom Martin who was based abroad, for an article written by the art critic of the paper. The veteran editor had to keep coming to Goa for over ten years till the case was dismissed.
The solution to what the former chief justice Ranjan Gogoi calls “a ramshackled judiciary”, is to reform the judiciary. One of the first steps should be that no adjournments should be permitted. That a time limit should be fixed for deciding every case. If you ever spend time in any court you will find that very few verdicts are given. Most of the time the case is postponed to the next hearing. Even in the case of the disqualification of the 12 Goan MLAs who defected, the Supreme Court took more than a year to hear the matter and take decision.
IN the case of property matters in Goa, the Uniform Civil Code should be amended as it has been done in Portugal. No longer are individuals heirs allowed to hire lawyers to dispute the value of property given to them in the inventory process. A tribunal has been appointed which settles such disputes.
Ranjan Gogoi could have reformed the judicial process he has contempt for if he had wanted to. Instead, he has himself accepted political favours from the government in power. Surely it is not right for a former chief justice of the SC to destroy the faith of ordinary people in the judiciary? I hope the present chief justice will initiate contempt procedures against Ranjan Gogoi for contempt of court.