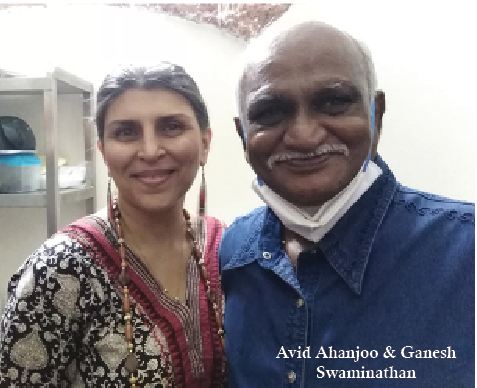 DISCOVERING PERSIAN CUISINE!
FORGET chocolate. These days I’m taking to Persian food courtesy this amazing Iranian woman Avid Ahanjoo of naval port town Vasco da Gama. She is Iranian, she is passionate about doing authentic Persian meals for whoever is interested. Last week while in the blue doldrums of earning a living came this tempting invitation from Avid. She was launching her Persian fine dining out at a grand old Portuguese villa called Casa Dos Gamas, next to the Holy Cross Church at Verna, please come enjoy.
We (I went with a girldfriend) were half-an-hour late because nobody really knows addresses out here in Goa, with most who queried saying “We are all new here! Ask someone else!” Then GPS got us to Casa dos Gamas and it was so easy! Casa dos Gamas is just next door to the Holy Cross Church, can’t miss it. Grand vintage Portuguese mansion with the most unusual balcao seating I’ve seen to date, cool and inviting in satin dark red oxide…host Ganesh Swaminathan was at the gate to welcome us (wife Avid was in the kitchen).

A bit later we said hello to her while relaxing in the garden grounds. There was a table loaded with a large jug of fruity sangria and platters of fresh cut fruit — Persian musk melon, strawberries and grapes of the season, kiwi fruit. Avid said, eat while we the others arrived. My curiosity got satisfied when I learned Avid and Ganesh are a most interesting couple! He is Tamil, she Iranian. How come? She said they’d met while exchanging notes over some Yahoo Chat Room, took a shine to each other and got married in 2003; they have a 16 years old daughter. Avid is all love for India and Goa equally.
Yes, she is Tehran born and bred otherwise and loves her Persian cuisine too much, she would really like to introduce Goans and tourists visiting Goa to it. Later while chatting, she confided, “In Iran everyone cooks. My mother and father cooked differently because they come from different parts of Iran. Both of them taught me how to cook. In Iran there is no maid culture like in Goa! Everybody cooks for themselves or the family and everyone learns to cook!” So that was that.
IT was an evening of discoveries out at Casa dos Gamas as we unwound our stresses of the day. It got me thinking of stories in my mind about Persia. You know nobody calls Iran Persia anymore? If I remember right the Shah of Iran Reza Shah Pahlavi once appealed to the Western world to please call them Iran and not Persia any more! Persia was dubbed so by Westerners who came along with the invasions which brought ancient Persia to its knees and more…you know any ancient Persian history?
(Sigh) Nevertheless the word Persia stirs up so much sadness of history gone by for I remember a bit about how a King Darius had a son Xerxes, in the habit of getting drunk on power, wealth and wine and he wanted to conquer ancient Greece. Before he could do that Alexander the Great came along and conquered the entire Persian empire of those times; sending its people royal or of common ethnic origin fleeing for their life to safer pastures over the mountains with their gods, holy books, whatever livestock they could take.

I don’t know why our children don’t learn history anymore! Even our today’s Raj sarkar politicians can do with history lessons about what happened to other ancient civilizations to make them turn over a newer leaf in our present times!
But to continue with my foodie column here this is to say I was most taken up by Avid Ahanjoo and Ganesh Swaminathan (these days many women like to keep their maiden surname in marriage). She is lively, emotional, an artiste who’s studied art. She loves her Persian food and persuaded hubby dear to shift residence from Erode in Tamil Nadu where they were living, to settle in Goa which appealed to her more and where she has some good friends.
WE chit-chatted out in the garden grounds with other invitees which included naval foodie couple Sumit and Mitali Pant, also Ashok Kamat, two more were to join us later but they didn’t arrive. Avid was mostly too busy to talk because she was doing all the cooking and adding final touches to her menu. A really exhaustive menu comprising of starters BBQ eggplant (delicious aubergine blend, the Iranians are too fond of aubergines and have many recipes), there were herb fritters (stir-fried herbs compressed into patties), phyllo cups (filled with saucy veggie medley), a season’s salad as pretty as a painting, some tart pickle of mixed veggies and another of pomegranate-beetroot combo juices.
Ahhh, came the chello rice encrusted with saffron potato slices at the bottom (this almost golden burnt crusty bottom layer of bread or potatoes, exclaimed Avid, is something family members may fight over, who should get the bigger pieces and only may distribute to keep the peace). She had two kinds of crusty bottomed rice which is served upside down — one just digs into them, one was austerely plain with a more saffron crust and the other was plain polo or pilaf enshrined with lobia green beans and cottage cheese).
What’s there left to say! We had little room left in the stomach to do justice to the main dishes of intriguing tartish fish gravy (thick cuts of kingfish simmered in it) or brown mutton stew (redolent of walnuts)…after that it was a case of no no’s to sweet dessert pastries or Iranian tea, thank you. It’s almost midnight, we have a long, long way to go to Panaji and may we say bon soiree, goodnight, au revoir and run away, utterly filled with some of the best food I’ve eaten to sleep over? Kisses and hugs all around and we left.
I will say Persian food is far superior to even Mediterranean food which I tend to favor over the Continental cuisines, it’s far more sophisticated and classier…takes real skill to cook up. It’s also light-hearted, something I love. Take a bow Avid Ahanjoo-Swaminathan!

AUTHENTIC COOKING
YOU know the way ahead for real food lovers is to invest in home chefs like Avid and nowadays, my friend Ajanta Burman, tells me if you’re a home chef and would like to entertain folk to authentic ethnic food at home, you may enlist yourself with several travel sites which make the arrangements …you can enjoy a proper sit-down service as say in this case, Persian food. In Mumbai there are now several home chefs doing all kinds of authentic cuisines be it Gujarati, Bengali, North-Eastern, Parsi and so on. India is so rich in its culinary heritage and increasingly discerning travelers want to eat the real stuff cooked with love — instead of a hotel’s hatefully prepared nonsense fusion dishes!
Of course home chef kitchen food like this one would come at a price, anything from Rs1,200 or Rs1,500 per person, or more depending on the menu you place an order for. Some home chefs do takeaways too if they cannot entertain at home. As Avid tells me one may do this kind of more informal, inclusive entertainment only on a good prior notice of at least three days, “In my case I have to avail of the kitchen and premises of say Casa dos Gamas for the evening….I have to do shopping for freshest herbs and meats and it is careful preparation to have such a beautiful evening!”
So it is Persian food evenings at Casa dos Gamas, anyone? Needless to say this is a very niche and fascinating foodie segment coming up and I do wish Avid Ahanjoo loads of luck in her new venture. Catch up with her over Facebook or call her! I’m already pining for more of her kuku herb fritters and fish stewed in pomegranate sauce or walnut gravy, also crusty infused rice (not easy to perfect).
Ha, ha, from the sound of it even Alexander the Great didn’t want to return to his home country Greece. He wanted to live the good old Persian life in Persia or Iran (whatever you prefer, I still prefer Persia although that Persia is gone with the wind) — where several wives were gifted to him including one called Roxanna. But I’m talking of 330 BC yesteryears okay, when the Persian empire stretched from Europe to Egypt to India! Alexander died in Persia before he was even 35 years old. His father King Phillip of Macedonia had once told him something like, “Macedonia is too small for you. Go find a bigger kingdom for yourself!)” He did just that but died in the prime of his life due to the gods alone know what, maybe somebody killed him. History is silent and not sure on this tragic mystery death.