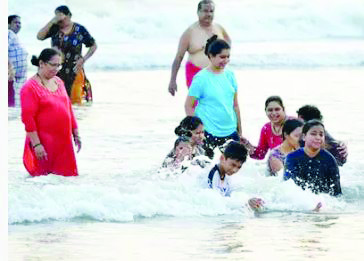 PICNIC: Historically, Goan families go away for a beach holiday with friends for their annual summer break to relax on the beaches. May is when you would see grandparents taken to the beachside to soak in the salt sea water said to be good for those suffering from arthritis and any itches and pains!

THIS is the time of the year when Goans have traditionally gone on a summer holiday to the beaches. Goa is a paradise of beaches. The summer holidays in days gone by were elaborate family and neighboring friends picnics. Cottages or rooms by the beachside were hired for the day or weekend or a few weekdays. The entire extended family would be there.
Niz Goemkars share this observation that salt sea water baths just before the monsoon sets in is good for settling arthritis pains and hot summer skin infections. Even now come the month of May it is common to see seniors parked on the beachside in knee deep seaside water.
And, believe it or not summer beach holidays were also match-making and courting holidays for young Goans. Young men would come down from the Gulf countries and parade themselves on the beach! So would young women looking for a proverbial suitable boy. Their escorts were mama exchanging gossip about the young marriageable sons and daughters and their backgrounds and employment status. The nuptials may have been held in the churches but the engagements were virtually completed on the beaches of Goa.
Goans go to the favorite family adopted beach on their summer holiday fully prepared. Large groups carry with them their own liquor, glasses, food. There are of course safety swimming equipment and other paraphernalia for the children to have some fun with their families in the near distance. The carry their own food and whatever other complementary things desired would be taken from the nearest beach shack.
Unlike the tourists, Goans take their unconsumed liquor back home and summer time refreshment drinks would include the fresh neero of caju fruit, fresh distilled urrack and feni (Goa’s very own liquor). There are no broken bottles left behind on the beaches or even plastic pet water bottles which are now so rudely discarged everywhere courtesy tourist hoards.
The Goan family picnic out on the beach would also include some family member or friend bringing along musical instruments like the gumot (local drum) or the guitar to play to entertain everyone with Konkani songs or old Hollywood or Bollywood Hindi songs – the youngsters would should off their talent with or without parent or grandparents urging and appreciating them.

DOMESTIC TOURISM
ALAS, today more Goans are shunning the beaches. They have been taken over by domestic tourists. Many of the Indian domestic tourists coming to Goa may have never seen a beach before and they go crazy upon seeing the foreign tourists wearing next to nothing in the hot sun or beach umbrellas and sunbeds…what are these white women wearing and why are the foreign tourists called hippies. Is there nothing like beach etiquette?
Local Goans are of course used to seeing the foreign tourists solo or in couples who have been coming to holiday on Goan beaches right from the 60s. in the wake of the Vietnam war where joining the armed forces was mandatory for everyone who reached 21, many young people left the USA looking for paradise beyond their own shores. This was the beginning of the appearance of “flower children,” early trance music and recreational drugs like marijuana (the deadly drugs came in more recently).
In the old days the hippie came but they kept to themselves down or up certain beach areas and interacted with locals just for necessities like fruit and food. Soon Goans got used to these foreign women in bikinis and sarongs sunbathing quietly on the beaches, they did not want much except to be left alone!

CHARTER RUSH
THE domestic rush of tourism started way back in 1984, after the international media discovered Goa during the Commonwealth Heads of State Retreat in October 1983. There were 52 heads of government and state who had decided to get together without their delegations to have a candid chat on global issues concerning the commonwealth. CHOGUM road was developed for the retreat which was covered by international media. Goa became famous afterwards.
Soon the charters started coming and the Central government took the decision to welcome charter tourists from the world over. Under the charter deals holiday seekers from UK and Europe, seeking to escape the bitter cold of their own winter months, were happy to fly down to sunny Goan beaches for a month or two or three. Travel agents offered much lower rates for charter flights and they became popular, the fares were more economical than the commercial flights. The deal, however, would be that the charter tourists were long stay tourists and would spend at least a minimum of three weeks in Goa and stay in a hotel three-starred or the boutique hotels which offered breakfast on the tariff and these were hearty breakfasts with everything laid on. These tourists were not used to eating lunch in their own countries.

Since the bulk of the chartered tourists from the UK were from the middle class or even lower middle class, they had small budgets and could not afford the bigger hotel rates for meals. Breakfast on their limited tariff holidays were welcome. Most of these tourists would take a packed snack from the breakfast buffet and go spend the entire day on the beach.

NOVEL NUDITY!
SINCE it was a novelty for the rest of the country to see women in bikinis or in the almost nude, almost every national publication did a feature on the chartered tourists of Goa. They came to sunbathe and get a tan. Indian tourists came to ogle at the near naked women and marvel at their freedom to do so! Over a period of time the more aggressive domestic tourist became a nuisance with many of them assuming that since the white tourists were parading themselves virtually naked, perhaps they were also “available.”
Frustrated domestic tourists at the very least insisted they take pictures with the foreign tourists and now there are the selfies. The idea was to return to their home states to boast about how many women they had scrored with!
For domestic tourists the beaches of Goa were not the only attraction. An even greater attraction was the price of booze which was easily available at cheaper rates then in their own home states including neighboring Maharashtra and Karnataka. Indians drink liquor like there is no tomorrow! Being drunk without their parents or grandparents around gave them a new sense of liberation. Goa was paradise! But soon these desi tourists became a deadly menace. They started driving up or down to Goa in huge buses with their own arrangements for cooking out here, there and everywhere – they wanted save on not eating hotel food! It was better to take their own cook along with provisions and cooking equipment.
They bought crates of beer and other liquor from the wine shops close to the beaches and would start drinking straight from the bottle when it was beer or even wine. Their souvenirs were broken bottles left on the beach sand to hurt somebody walking barefoot! Over the years cases of drunk tourists drowning also steadily increased.

BEACH DANGERS
BEACHES regardless of whether they are riverine beaches like Miramar beach in capital city Panaji or sea beaches like Baga-Calangute beaches which look deceptively safe, tourists soon learned that mouths of rivers entering the Arabian sea were dangerous waters with currents which could take them away and especially if they couldn’t swim…rip currents could drag them away over rocks or into the middle of the sea. Rip currents are extremely dangerous. Which is why tourists who are unfamiliar with a beach should strictly follow the directives of lifeguards and stay in safe flagged off areas for swimming or just playing with family or friends.
Calangute now offers public changing rooms and wash rooms but most of Goa’s beaches do not have these provisions for tourists. The only washrooms easily accessible on beaches are those attached to beach shacks which one may use if only one is a customer patronizing the shack’s chairs, beach beds, drinks, food and other services.
Seeing how the beaches of Goa have been taken over by tourists it is advisable that Goans stay away from the popular summer holiday beaches anyway! There are no beaches left, only beach beds everywhere. Plus, you are likely to be approached and even harassed by dozens of sales people from out of Goa urging you to take their massage or the Lamani community women and children may insist you buy their beauty products and cosmetic jewellery or their ubiquitous collection of sarongs and flimsy beachwear. The much maligned “Lamanis” are poor tribals from Karnataka with amazing linguistic skills. They have a talent for picking up languages and speak even Russian and Hebrew. Unfortunately, political elements have started a campaign against them.

FOR RICHER HOLIDAYMAKERS
THE beaches of Goa offer all kinds of sporting activities nowadays to holidaymakers. The bold and the beautiful and rich and powerful may enjoy wind surfing, dolphin viewing and chasing, going up in a balloon and snorkeling and deep sea diving to see reefs in the clearer waters of exclusive islands tucked away and more difficult to access by the common place tourists!
At Baga beach an enterprising Goan offers to teach you wind surfing. You can go touch the clouds in hot air balloons (be careful if you suffer from vertigo). At Mayem lake there is exciting bungee jumping and the latest tourism highs may be enjoyed at the
Bambolim Grand Hyatt beachside where the luxury hotel has rigged up equipment for you to go up 160 feet high on a platform – to breakfast or dine beneath a sky washed with the colors of sunrise or sunset! These platforms are propped up by state-of-the-art crane machinery.
Elsewhere the second generation of the famous Madgaonkar brothers continue to take interested tourists scuba diving at butterfly beach, also deep sea diving. Goa’s now many nature and spice farms offer traditional “kulgars” to live in for a few days and experience farm life. You may watch how caju feni is distilled in a traditional wood-fired distillery, buy spices, enjoy a sumptuous lunch or dinner at these spice farm outings. Beer is offered to quench thirst but not hard liquor. Some more enterprising spice farms offer water slides and swimming pools for tourists to cool if they wish to.
The latest enterprise comes courtesy “All Rounder” Irineau Gonslaves, a former football player and scrabble champion, whose children have started what is called a natural entertainment zone.

CONCLUSION
IN conclusion, there is more to Goa than sea, sun, sand and booze. Just stretch yourself a little if you are want to see the Goa which is not seen by the run-of-the-mill tourist who come to eat, drink and freak out on the already chok-a-blok beaches of north Goa or south Goa which are still not so crowded and continue to remain a little more restful and at peace with the old world traditions of a Goa which is going, going and will soon be gone!