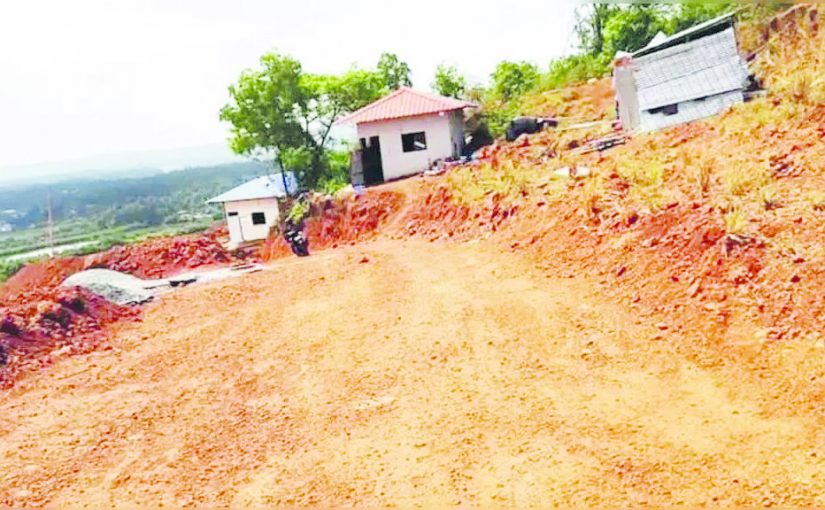 Caption: REVENGE: Vishawajit Rane, now with the TCP portfolio, has filed a case against Leader of Opposition Michael Lobo and his wife Delilah for massive hill cutting and tree felling for the construction of the Park Regis Hotel in Arpora.

AND a few stray thoughts on Chief Minister Pramod Sawant greeting the Goan population on the occasion of Parshuram Jayanti. Sawant posted on Facebook his best wishes alongside a picture of Lord Parshuram. For the benefit of the younger generation who may not be aware of who Lord Parshuram is, perhaps a little history would be relevant. Legend has it that Parshuram was supposed to be the seventh incarnation of Lord Vishnu, part of the Hindu trinity of  Shiva, Vishnu and Brahma .

Lord Parshuram for whatever reason seemed to have acquired an ardent  dislike for the Kshatriya class (Chardo) and is alleged to have massacred them. Parshuram is supposed to be savior of the Brahmin community including the Goa’s Saraswat Brahmins. Since the Kshatriya  people kept chasing Brahmins perhaps to take revenge, Parshuram led his flock of Brahmins further down Goa. To create land for his Brahmin followers Parshuram is reported to have shot an arrow from  Chiplun in Maharashtra which landed in Benaulim in Goa. Chiplun exists and there is in fact a Parshuram village where the Taj Group of Hotels have a motel — on the Goa-Mumbai highway.

The area covered by the flying arrow or arrows  of Parshuram reportedly made the Arabian sea recede to create the verdant paradise of Goa, or rather the entire Konkan area. It is Subhash Velingkar’s claim that since Lord Parshuram was the founder of Goa, he better deserves the title of “Goencho Saib” than St Francis Xavier. It is obvious that the proposed rathyatra or yatra planned by Subhash Velingkar is akin to an action replay of the Ram Janmabhoomi Rathyatra launched by L K Advani more than two decades ago. It may be recalled that the Ram Janmabhoomi Yatra culminated in the demolition of Babri Masjid at Ayodhya and gave a big boost to the Bharatiya Janata Party (BJP). Our fear is that Subhash Velingkar’s Bhagwan Parshuram Yatra may lead to the demolition of the Bom Jesus Basilica.

Francis Xavier himself spent very little time in Goa. Even during his tenure in India he spent much of his tenure down the Malabar Coast with the pearl divers who were a most exploited community.  Francis Xavier moved on to Malacca in present day Malaysia. He even tried to conquer Japan in his insatiable compulsion to reap souls for Christ. He even tried to enter China. Some smugglers promised to take him to China but abandoned him on an uninhabited island across the channel.

Francis Xavier is reported to have died on the island and buried in a quarry of quicklime. It was then not known that quicklime is dehydrating. It was due to his burial in a bed of quicklime that his body got mummified. So the miracle attributed to the preservation of the body may be due to natural mummification. His body was recovered from the island and when Jesuits looking for him found his body it was still remarkably intact — they assumed it was a miracle.

Francis Xavier was brought back to Goa and after he was canonized by Pope Gregory; in the records I studied while writing my brief biography of St Francis Xavier, I did not come across any instances of temples being demolished or Hindus being mutilated.

AND a few stray thoughts on Chief Minister Pramod Sawant obviously colluding with former RSS chief Subhash  Velinker. For the first time in the 40 odd years I’ve worked and lived in Goa,  a chief minister has greeted citizens on Parshuram Jayanti. In his Facebook post along with an image of Lord Parshuram, the CM greeted Goans with the claim that Lord Parshuram created Goa.

It is obvious that Pramod Sawant is in collusion with Subhash Velingker. The announced yatra of Velingker is part of a national agenda of the BJP to convert the whole country into a Hindu state. Goa is perhaps the only state in the country which has been spared the BJP targeting of minorities and their persecution.

Unlike the other BJP-ruled states there is no ban on the transportation and consumption of beef in Goa. There are no demands that Hindu religious literature like the Bhagwad Gita and Ramayana should be included in school syllabi. There has been no lynching of Muslims or targeting of crosses and churches as happened in Karnataka.

But it would appear that Goa is headed in the direction of the other BJP states under Pramod Sawant. The CM has posted that Hindu gods are under threat and if the gods are under threat then the Hindu religion is also under threat. He even claims that he has got proof of religious conversions going on. He does not realize that given the demographics of Goa the BJP will be committing suicide if it adopts the communal polarizing policies followed by the other BJP states. Between the Catholics and the Muslims they account for virtually 50% of the population of the people of Goa.

AND a few stray thoughts on the new Town & Country Minister Vishwajit Rane targeting all his former Congress colleagues. Vishwajit, who joined the BJP just before the 2017 assembly election, has issued an FIR against Leader of Opposition Michael Lobo and his spouse Siolim MLA Delilah Lobo. They are being accused of being party to massive hill cutting and the mass felling of trees in Arpora for the benefit of a five-star luxury hotel.  Michael Lobo was the chairperson of the North Goa Planning & Development Authority and had sanctioned the hill-cutting by the promoters of Park Regis Hotel.

Vishwajit Rane has also targeted Babush Monserrate who was the chairperson of the Panaji and Taleigao Planning & Development Board. Babush has been accused of permitting large scale CRZ violations and unauthorized increase in the floor area ratio in Taleigao. Historically, the tradition in Goa was that the height of a building should not be more than that of a coconut tree. It was Monserrate who permitted eight to ten storied structures to come up on the Dona Paula bypass road. The latest controversy  is over the eight-storied building allegedly constructed close to an existing residential colony by the Pride Casino.

Monserrates’ strategy has been to encroach on existing paddy fields to enable the construction of high-rise buildings. The Dempo complex , the Vision Park complex and the several Adwalparker projects, not to mention the new Models projects which are all the gifts of the Panaji MLA, who has now inherited his wife Jennifer Monserrate’s Ministry of Revenue, which is in charge of the Office of the Collector, will make it easier for Babush to issue ration cards and domicile certificates to all his migrant vote banks. Vishwajit has also targeted Mauvin Godinho although he is a colleague in the BJP cabinet by suspending the PDA of Vasco da Gama.

AND a few stray thoughts on owners of property whether they are resident in Goa, or not being able to sleep more soundly because of the latest step taken by Law Minister Nilesh Cabral along with Revenue Minister Babush Monserrate. There have been many cases of property owned by Goans living abroad which have been usurped and sold illegally. There was even the case of the property of a Goan Olympian being sold without his knowledge based on fake documents. Most people who buy property in Goa do not bother to do a title check. Unlike in other states the sales deed issued by the sub-registrar is not worth the paper on which it is written. The sub-registrar does not take the responsibility for guaranteeing the property sold to the seller.

Under the Portuguese Civil Code 50% of the property automatically goes to the spouse on the death of the owner. To ensure that the property bought belongs to the person who offers to sell it to you have to do a title check going back four generations. The law minister has now  introduced a system whereby registered owners of property will be alerted in the case of any bid by a third party to sell the property.

AND a few stray thoughts on India slipping from rank 140 to 150 in the World Press Freedom Index. Ever since the Narendra Modi government came to a power there has been a steady drop in the index of freedom of thought in India. Of the 180 countries surveyed by Reporters Without Borders there has been as Steady decline from 80th rank to 142nd rank from 2014 when the Modi government came to power.  The NGO Reporters Without Borders has recorded several cases of violence against journalists in India.

Besides the violence the Modi government has pressurized managements to sack disobedient  journalists like Barkha Durtt, Rajdeep Sardessai, Siddharth Vardarajan, Shekhar Gupta and some others.  Amongst the  recent victims has been Faye d’Souza who used to be a most popular anchor on the Bennet Coleman-run Times Now television channel. Only the godi media, used ot describe the pro-Modi section of the media, has been permitted to survive happily. Amongst the most notorious of the godi media is Arnab Goswami’s Republic TV. Even in Goa independent media groups like the “Goan Observer” have been completely deprived of their share of government advertising. Private advertisers are intimidated with threats of income-tax raids and action by the Enforcement Directorate.

Moreover you cannot travel even within the country, let alone go abroad without taking both doses of the covid vaccine. There were relaxations after the third wave. However, the recent increase in the number of covid cases both in the UK and Europe and national capital Delhi, have brought back Covid-19 curbs. Goa of course is more interested in promoting tourism than its residents being afflicted by covid.

It is liberty hall in Goa as you don’t need either proof of having taken both doses of vaccination or even  produce a non-covid certificate to come and go from Goa.   Meanwhile Goa Medical College & Hospital Dean Dr Shivanand Bandekar acknowledged a fourth wave of covid coming in next month.