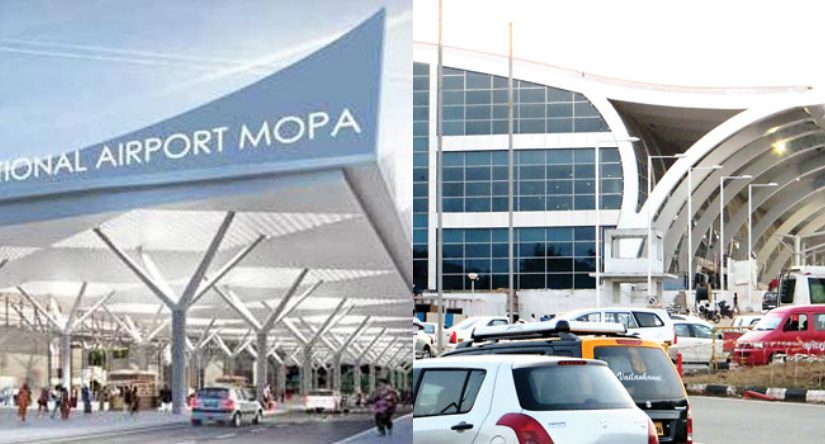 FOR WHOM? The Mopa airport is expected to start from functioning on September 1 but it is not clear if the Dabolim flights will be diverted to Mopa or which airport will be reserved for charter flights.

AND a few stray thoughts for yet another Saturday. For a Saturday following the week when the BJP has realized the consequences of attacking Muslims outside the country. For a Saturday following the week when schools started functioning from June 6, 2022 amidst fears that there is a fresh Covid-19 wave. For a Saturday following the week when Chief Minister Pramod Sawant claimed that Mopa Airport will start operations from September 2, but nobody is clear about who will be using the airport. For a Saturday following the week when 88 mining leases had to surrender their property to the State government as per the rules of the Supreme Court. For a Saturday following the week when the law and order situation in Goa took a turn for the worst.
AND a few stray thoughts on the BJP have realized the consequences of attacking Muslims outside the country. As long as the BJP fanatics limited their attacks to BJP-ruled states. But it is the different matter when irresponsible BJP leaders like Nupur Sharma and Naveen Kumar Jindal start making abusive remarks about Prophet Muhammad. We have bitter experience of how sensitive Muslims are to anything negative said about the Prophet.
According to Islam it is forbidden even to draw an image of the prophet. Perhaps Prophet Muhammad is the only head of a religion who has barred any image or idol representation of him. The closest to any kind of symbolism is Mecca which is a pilgrimage place and Mecca pilgrimages have just began anew. It may be remembered that when well-known French satirical weekly magazine `Charlie Hebdo’ published a caricature of Prophet Muhammad two fundamentalist Islamic brothers forced their way into the Paris office of the publication and killed 12 people on January 7, 2015. This incident set of a wave of killings. In Islam it is forbidden to depict any image of the prophet in any mosque in the world and this includes Mecca and Medina which are the main pilgrimage places for devout Muslims worldwide.
India under the Modi government does not realize how powerful the 57-member Organisation of the Islamic Conference and Islamic countries are. The Islamic countries include not only the United Arabic Emirates comprising Abu Dhabi, Dubai, Sharjah, Ajman, Umm Al-Quwain and Fujairah. Besides the UAE the most important Islamic states are Saudi Arabia, which produces the largest amount of petroleum, and Qatar which supplies India with liquefied petroleum gas LPG.
There are other Islamic countries like Malaysia and Indonesia and even some members of the former Soviet federation like Khazakistan. The Islamic countries are still not happy with just the suspension of Nupur Sharma and Naveen Jindal. Not only have several more Islamic countries like Malaysia, Iraq and Iran, warned India but the International Human Rights Forum has also condemned the treatment of Muslims in India.
The Egyptian parliament has expressed strong condemnation and rejection of the irresponsible remarks by Nupur Sharma. The Maharashtra police have summoned her and are likely to file a case against her. The BJP’s merry roll out of Islamophobia may cost the country dear as the Arabic countries are stopping the stocking of Indian goods like rice, pulses, meat, fruit and flowers. In some cases Hindu employees are being asked to return to India. There is going to be a sharp drop in remittances sent by Hindu employees in the Gulf countries to their families in India. Modi has finally realized that his tacit blessings and silence on attacks on Muslims and Christians can back fire and severely affect his chances of returning to power in 2024.

BACK TO SCHOOL
AND a few stray thoughts on schools which have started functioning from Monday, June 6, 2022. Not virtually, but physically. It was a very pleasant sight to see the students and teachers of Red Rosary school all dressed in red. But there are concerns over how teachers and students are going to make up for the two year covid-19 lockdown gap. During the lockdown education particularly at primary level had virtually come to a stop. Smartphones are not a substitute for physical classes. On the contrary they have proved to be dangerous for young students who then play dangerous games. There is even a case of a 10-year-old having lost Rs21 lakh playing online games on a smartphone.
But the issue is not confined to the smartphone. There is also a new controversy thanks to the Goa Revolutionary Party about reservations for primary students to the people of a particular area. For instance in Navelim the POGO fanatics are demanding 75% reservation for Goans only. Historically, when Luizinho Faleiro was in power, students could get admission to the primary level once they got a recommendation from Rachel Faleirio, the wife of Luizinho Faleiro.
Before the late Manohar Parrikar government submitted to the blackmail by the archbishop to extend grants to English-medium schools, more than 60% of students were in government schools because they could not afford the fees. Now over 80% of the students are in aided schools which means that the State government pays staff salaries and other expenses. The challenge before both students and teachers has been dramatized by the national readership survey which has revealed that even students of the 5th standard are not able to do simple addition, subtraction and division, which we’re supposed to have learned in the second standard. This gap has to be bridged and the students also have to be brought up to date in other subjects particularly languages.
There have been complaints about the quality of education in Goa at higher levels in college and university. Goa University was downgraded by the National Accreditation Committee. The problem with the colleges is that a majority of them depend on part-time teachers. Goa is probably one of the few states where teachers are employed for a token hour. This is not a temporary arrangement but a permanent temporary arrangement. Moreover, the majority of teachers do not have the required qualification. Teachers at the college level are required to have passed the National Eligibility test or secured a doctorate.
Forget about colleges, even in University the majority of lecturers have only passed their Masters and do not even have an MEd degree. There are colleges which have only a Bachelor’s degree even in vocational colleges. The biggest rackets are the so called vocational courses, which are fully paid for by the students, such as management courses and mass communication. Except for a coordinator, all the lecturers are part-time/ hourly basis. We fail to understand why senior citizens such as professionals from companies and the media are not used to mentor those who enroll in these professional colleges.

MOPA AIRPORT
AND a few stray thoughts on Chief Minister Pramod Sawant claiming that Mopa Airport will start operations from September 2. It is not clear as to who will use the airport? He has not made it clear which flights will operate from Mopa Airport. It has been repeatedly made clear that Dabolim Airport will continue operations even after Mopa Airport is commissioned.
Indeed, historically the charge has been that Mopa Airport has been built for the benefit of south Maharashtra and not Goa. The Maharashtra government was very keen on developing tourism in adjoining areas like Vengurla, which have some of the best pristine beaches. The chairman of Fomento Group has even built a seven-star hotel with Sharad Pawar in Vengurla.
The primary issue is connectivity. It takes only 30 minutes to drive down from Mopa Airport to the beaches in south Maharashtra which are just across the border with Goa. But to get to the Taj Exotica down south Goa in Benaulim or the Leela at Cavellossim, it will be three hours — more than the time spent on the flight. The cost will be more than the airfare.
The Congress has complained that the concession being paid to the farmers who lost their land has been at agricultural rates and not commercial rates. The GMR which is building the airport claims to have employed 467 Goans so far. Of these, the majority are for meagre jobs from the villages. We fail to understand why GMR has sub-contracted the supply of food and housekeeping to Sodexo, the multinational company which has its headquarters in Paris. Surely air passengers expect better quality food than meals catered for hospital patients. Vikram Singh Tomar, communications chief of GMR, claims that all fire fighters at Mopa Airport have been recruited from Goa. He did not reveal that they had to pay Rs2.60 lakh to get them trained.
We have been repeatedly demanding that an aeronautical engineering facility should be set up at least, so that trained mechanics if not engineers can be hired from Goa. There are literally thousands of Goans employed at Heathrow and Gatwick airports in London. Many of them have to come back as their Portuguese visas are no longer valid after the UK left the European Union. Surely their skills can be used by GMR?
Our only fear is that GMR which is an Andhra Pradesh-based company (the R standing for Reddy), will not collude with VKR – the worst contractors in Goa who have got away with the destruction of the late Manohar Parrikar’s dream projects and all because of their high connections. The communications chief seems to be more interested in weightlifting than in communications as per his Facebook profile.

MINING LEASES
AND a few stray thoughts on the 88 mining leases to be surrendered to the State government as per the rules of the Supreme Court. The attempts by the mining lobby and the Goa government which is permitted to renew mining operations, has been rejected by the Supreme Court. The mining companies which include big names like Vedanta, Shivanand Salgaocar and the Timblos, have to handle the leases with all the necessary recruitment to be done by the State government. The Central directive is that all natural resource projects being exploited by companies should be auctioned to the highest bidders. It all began with the controversy over the allotment of coal leases on a discretionary basis to various ministers in the Central government. Even Prime Minister Manmohan Singh, who was acting as the coal minister for a brief period, was implicated while allotting coal leases to the bidders.
Captive coal leases are mainly sought by steel companies for whom coal and coke are the raw materials. It is the red hot coal which enables the steel companies to convert steel rods into various shapes like pipes and other construction material. In the case of Goa, it was the Supreme Court and Manohar Parrikar who ordered the suspension of mining. The Shah Commission appointed by the Supreme Court accused the mine owners of defrauding the Goa government of Rs35,000 crore.
The last straw on the camel’s back was the decision of Finance Minister Nirmala Sitharaman who imposed a 50% export duty on the export of low grade ore. The worst affected is Goa because the ore mined in Goa has less than 50% iron content. Historically, the ore from Goa used to be exported even to Japan and Korea as the rate was only around 20 dollars per ton. But when the Chinese hosted the Olympics they were desperate for the ore as they built dozens of new stadiums including the main Bird’s Nest stadium. The price of ore shot up from 20 dollars to 200 dollars in the market. When the mines will be auctioned and when mining dependents will get jobs is a 64 million dollar question.