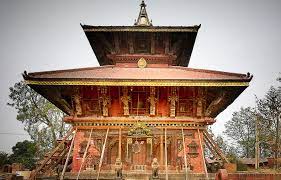 OFFICIAL: Nepal is the only country which officially considers itslef a Hindu nation. In contrast Saudi Arabia is a totally Islamic country where no temples or churches may be built.

IT’S an interesting and worrying situation. That one democratic, secular India—at least officially—is surrounded by officially declared Islamic countries (50 Islamic countries in the world at last count), should have to worry if it declares itself as the lone Hindu country in the world (are Nepal and Mauritius officially declared Hindu countries?)! Under the circumstances, if India is now aspiring to be a Hindu country officially, why so much fuss?
Wasn’t Pakistan formed on the grounds that Muslims must have their own homeland to live in peace and harmony with one another and the call went out from Mohammad Jinnah’s All-India Muslim League? The country got partitioned most idiotically with the blessings of the British and the Congress party leaders of the time but not Mahatma Gandhi’s blessings. So not a Muslim fanatics but a Hindu fanatic killed him in cold blood at a prayer meeting!
Can we call it the supremacy of hate over love? And today we’re back at that same crossroads – should we divide anew on grounds of religion. To save Hinduism or to save Islam? Remember Islam has many defenders the world over – and Hinduism? Only Hindus in India and Hindus settled the world over? So okay, we settle for a Hindu status for India and then what? Do we continue to be friendly with the non-Hindus settled in India for generations or declare war on them for this, that and the other…to heal our 700 years of wounded Hindu civilization?
Is the soul of India Hindu? Or is it an amalgamation or collective soul Hindus, Buddhists, Muslims, Christians, other marginal communities? Isn’t this far, far better? What do we gain if we declare ourselves a Hindu nation and re-write our constitution with such clauses as Hindus first, all else second, third or last? Of course we may not be all equal even in a Hindu state, the other religions will necessarily have to play second fiddle or so to speak. Is this the way to think? Hinduism superior — at least in India — all other religions inferior? We can also think Hinduism is superior and equally so Buddhism, Islam, Christianity and give all the religions due respect and space – and let peace rule amongst Indians. Let us be equal religiously at least if not in economic status!
Lately there’ve been many thought-provoking details put up over social media, my dears and some of it perhaps we need to think over. For example, this one:
“CLOSE to 2.2 million Hindu reside in Gulf countries of UAE, Saudi Arabia, Kuwait and Qatar. In a past one week these countries have ganged up against a Hindu majority India criticising the downfall of religious freedom of Indian Muslims. So I checked how much religious freedom these Muslim countries offer to Hindus from India. Here are the facts:
There are just three temples in these 4 Gulf countries for a Hindu population of 2.2 million. And all three are in UAE. Saudi, Kuwait and Qatar don’t have a single Hindu temple.
Government of Kuwait, vociferous against criticism of Indian government, had arrested 11 Indians in 2015 for conducting satyanarayan pooja in their house. Indian embassy had to intervene to release them. In 2017 the Kuwait government rejected a request for Hindu temple and crematorium made by Association of Indian Hindus in Kuwait. There is a Sikh temple operating in Kuwait since 1985. The government wants to close it down because it is against Islamic law.
IN Saudi Arabia, no temple or pooja is allowed even inside the homes of Hindus. No idols are allowed. Several times in the past 20 years, Hindus have been arrested and deported for worshipping idols or using makeshift temples in their homes.
Over 15% of Qatar’s population is Hindus from India and Nepal. Yet there are no religious places of worship for Hindus. During Ramzaan, Hindus re not allowed to eat or drink in public places because Muslims are fasting. This is a formal government order punishable by law.
MF Hussain, who had painted nude images of Hindu goddesses was given citizenship in Qatar to save him from religious threats in India. Husain was forced to give up his Indian citizenship to live in Qatar.
Religious freedom is a mirage in Muslim majority nations. All those supporting these nations sitting here in India need to reflect how better off they are in a Hindu majority India where religious freedom is absolute.
We do have problems and we need to resolve them. But please don’t put down the India philosophy and culture of this great nation alongside sharia-ruled Islamic monarchies just because you want to settle political scores. It is disgusting and shameful.”

(courtesy Ninad Vengurlekar, from the wall of Arifa Begum)

AND some more food for thought, long but interesting post (on FB):
“The BJP bhakt is more dangerous than the BJP itself. He uses the BJP to channelize his hate, insecurities, and biases against the minorities, political parties and all those who he disagrees with. In BJP he has found a voice which he had lost for 700 years.
He hates Muslims, he hates Christians, he hates Sikhs, he hates liberals, and sickulars, he hates Congress, he hates SP, BSP, CPIM and every other party leader. He hates Avind Kejriwal. He hates NDTV and India Today. He hates Prashant Bhushan and Yogendra Yadav.
He doubts the intentions of every good man in the country based on his religion. He believes Aamir Khan, Naseeruddin Shah, Javed Akhtar, Shahrukh Khan are traitors. When Aamir’s wife wanted to migrate, he made it a national issue. But when he learns that Akshay Kumar has silently migrated seven years ago, he justifies his actions.
He cannot laugh at jokes made on Modi. He will call the CM of Delhi as Khujliwal or Rahul Gandhi as Pappu but he can’t tolerate Kunal Kamra joking on Modi. All jokes have to stop when it comes to Narendra Modi.
He is educated, but flushes down his brain cells when it comes to sharing fake news against those he dislikes. He does not care that it is fake. He wants to share it nevertheless. The more fake news he shares, the better he sleeps at night.
In 2014, he believed that the Hindus were under threat. So he voted for Modi. Five years, 22 states and 300+ seats later, he still believes that Hindus are under threat. When asked what he is scared of, he will point fingers at the suicide attacks in Sri Lanka. When told that there has not been a single suicide attack in India (except Kashmir) in the past five years, he will change the topic.
He is a Master of Whataboutery. For everything that BJP does which goes against his values, he positions his arguments with a long list of Whatabouteries. This is his typical formula: Muslims did this for 700 years+ Nehru did that in 1955+Cognress did this in 1982 = BJP is Right. BJP is always right.
He is a bundle of contradictions. He promotes demonetisation as the need of the hour, but does not mind dealing in cash himself. He pays bribes to traffic cops and donations for school and college admissions. He sits for long hours with his CA to see where he can trick the IT department on taxes. He even pees on the roadside without waiting for a Swachch Bharat toilet. And he has the audacity to write Chowkidar before his name.
He wants a Bullet Train in which he cannot afford to travel. He wants the world’s tallest statue of a Congressman called Sardar Vallabhbhai Patel because Modi decided so. He will even justify the statue of Ram in UP, but he will not ask Modi why he couldn’t build a single statue of Veer Savarkar in the past five years.
He loves the national flag and the national anthem. But he cannot sing it when asked. He wants Muslims to say Vande Mataram, but he does not understand a word of it himself.
He is a Hindu who has not read the Upanishad. His understanding of Hinduism is through WhatsApp messages. He thinks God exists in the heaven and therefore Ram Mandir is necessary, and Sabarimala will curse Kerala for letting women in.

His icons are those who support Narendra Modi. In Bollywood, his yardstick is not acting but political views of the actors and directors. So Vivek Agnihotri is a rock star. He supports Akshay Kumar winning a national award for Rustom’ over Aamir inDangal’ and Manoj Bajpayee in Aligarh’. He trashes a movie likeGrand Masti’ for going against Indian values, but Vivek Oberoi becomes his new icon because he is playing Narendra Modi in his biopic.
The BJP bhakt is a follower at heart. He belongs to the industrial era. He uses the Internet, but does not agree with the foundations of the Internet economy. He loves discipline, orders and compliance. He wants to be lead. He does not like questions about his political icons. But he loves questioning everyone he detests.
He does not like to debate. He knows his icons are wrong. But he keeps justifying their wrongs. When he is unable to win a debate, he uses foul language. He gets personal. He calls names.
He refuses to speak against crimes committed by radical Hindus in the name of religion. He is happy to see innocent Muslims in India pay for the sins of ISIS across the world. He will never thank them for the grace they have shown despite being repeatedly reviled in the past five years.
He is more communal than the BJP. He is more dangerous than the BJP. He thinks he is in the majority because BJP has 300+ seats in the Parliament. He doesn’t care of the constitutional values. He is a Frankenstein created by the BJP. His hate will override BJP’s development agenda. I hope it happens soon than late, so that Narendra Modi can focus on what he has been voted for in the first place.
Look at this joker squirting milk on “Modiji.” In the past five years, BJP has made me realize that there are millions like him in my country. In an Internet economy, this is a telling image that represents India of the 21st century.
(Courtesy Ninad Vengurlekar)

There’s more but these two above items I think give us enough to introspect over before we jump over the fence from whichever side we are sitting on currently! Don’t sit on the fence, please. On that note it’s avjo, selamat datang, poiteverem, au revoir, arrivedecci and vachun yeta for now, my dears.
—Mme Butterfly