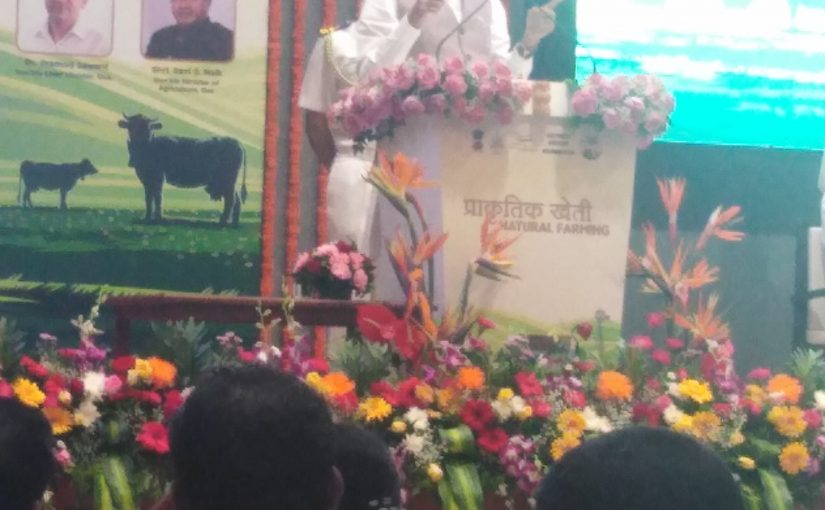 GOVERNOR OF GUJARAT ACHARYA DEVVRAT…launched a project of Natural Farming in Goa at an event organised by the Directorate of Agriculture at the Raj Bhavan September 21, 2022 as well in his exhaustive talk urged Goan farmers to forget chemical and organic farming and go for natural farming with the help of desi cows dung and urine slurry which will rapidly restore the biodiversity of ruined farming soil. It was a fascinating talk with Goan farmers in the audience listening as attentively as Governor of Goa PS Sreedharan Pillai, Chief Minister Dr Pramod Sawant, Goa Agriculture Minister Ravi Naik and others on the dais. Clearly, natural farming or “prakruti kheti” is the farming of the near future to combat global warming and other woes of the water scarcity and power outages! An eye-opening exhibition of Goan crops accompanied the event which was well-attended by the farming community, many of whom were awarded for their achievements on the occasion. This is Governor Acharya Devvrat’s first ever visit to Goa and he expressed his pleasure on being here, saying that from what he has seen so far, a small, well-endowed state like Goa can lead the way in natural agriculture and be the No.1 state of India.

IN our troubled times the call going out loud and strong is – back to nature! At least when it comes to farming your own food (and water). Dr Vandana Shiva has been saying it for years and now distinguished visiting Governor of Gujarat Acharya Devavrat is also saying it in a different sense. The Directorate of Agriculture had organized a most interesting event in his honour to popularize the concept of Natural Farming, on September 20, 2022 at the new Durbar Hall at Raj Bhavan in Panaji (incidentally, the Raj Bhavan has acquired a cowshed of desi cows to do natural farming).
Governor of Gujarat Acharya Devavrat’s was a treat of a long, long lecture on the wonders of “Natural Farming.” Presumably, natural farming is another way of saying permaculture, although the good governor of Gujarat preferred to use terms like “prakruti kheti” or “prakriti kheti” (means the same) — which can free us all from poison-free good health and who doesn’t want that? To be free from hunger and disease and enjoy good health anew till the end of time? I know I am still seeking truth, freedom, health…all related to one another in mind and body, heart and soul and that too at the tail end of my life, the worst of life for which the first was made!
But to stay with some of this Governor Acharya Devavrat’s real Gandhian talk with a twist here and there, he confessed he started off by being a disillusioned farmer for years on end, switching over from chemical farming to organic farming once upon a time – then he invested in some desi cows and started all over again on his 200 acres of farmland in Harayana. This time it was strictly natural farming which is today akin to a garden of paradise!
Switch over to natural farming or prakruti farming, he urged Goan farmers, he has imbibed it in letter and spirit and his crops are in much demand presumably — as healthy crops free from disease-causing toxins. Clearly he got the farming community in the auditorium very interested with his talk peppered with questions to raise your hand if you’re doing chemical farming, raise your hands if you’re doing organic farming, raise your hands if you’re doing no farming, etcetera.

Take the good governor’s advice and you may not have to commit suicide at all if you’re a farmer in this country! All you have to do is invest in a different set of inputs and it will make your land yield “gold” again! We have been listening to farmers’ woes and their sticky dilemmas for some years now and the farming people in the audience listened to the Gujarat governor with rapt attention, also responded keenly to all that he was tracing and explaining of his own experiences with farming…the governor of Gujarat speaks in shudh but very comprehensible Hindi. Most farmers I think followed him and they are trying to save and salvage their farms so that they don’t start dying a slow death courtesy all the chemical and doctored farming they have been doing with a slew of industrial farming fertilizers and pesticides and what not, and what not, which makes for temporary prosperity but later on perennial poverty. Once you are into the good life it is very difficult to get back to the bad life of basics to deal with poverty, sickness and premature seeking of sweet death.

big message
THE big message of today is stop all chemical farming the country over and safe Bharatdesh’s food reservoirs in the soil or so to speak! This will begin the job of not only freeing us from poison-free food but also create water and presumably turn the air to ambrosia to breathe anew – shun industrial farming of monoculture and the use of urea, pesticides, fungicides and all manner of other industrialist products which tempt a farmer with the promise of big, beautiful crops – but empty of life-giving health.
Say in a sense if we eat pharma-produced crops day in day out, naturally we will become the perfect patients for pharma drugs! Think about this very seriously if you’re a farmer or are thinking of doing farming as a hobby because you can afford it. Governor of Gujarat Acharya Devvrat has some very inspirational pointers on how to go about making a sea change or land use change in our livelihoods and I will salute him (for I am also a fellow Gujarati with my maiden name being Patel).
NEVER mind that Gujarat is running out of water and the honourable governor may be seeking a “dakshina” of 200 acres of land in Goa to turn into a natural farming school! His story is that he has been doing farming for over 35 years but failed, until he switched over to natural farming (permaculture) – where you restore the microflora of the land till the earth or soil is so rich in microflora organisms that it yields bountiful harvests year after year after year.
And what do you need on your farm into a garden of paradise anew? Just two desi cows to begin with. Don’t milk them, let the calves enjoy the milk. Just let them walk the land and put their dung, urine and jaggery slurry (stirred for five days) into you farmlands …and this cocktail will cheerfully make the earthworms or “ganduram” rejoice, they will happily oxygenate your land with their steady movement up and down, breeding prolifically and contributing to the earth rich souvenirs of bursting health. Life-giving nutrients and water will return to rejuvenate and regenerate your farmlands into a wonderland of fruit and food no matter how small.
Novel idea: Let your earthworms be your slaves! They won’t even revolt and they want no gold coins in payment! Better than labor which is hard to find nowadays…it is the earthworms which are a farmer’s best friends, but here we’re talking of fat desi earthworms and not vilayati earthworms or something like that (I must confess I would have appreciated a press conference with this governor)! Do you know that if you drop urea on earthworms they will give up their ghost and die on you?

SO the first thing the government should do if it is serious about helping farmers from committing suicide – is to stop all subsidies for urea, chemical fertilizers, pesticides, et al. Instead help them go natural and learn it from the governor of Gujarat Acharya Devvrat, who comes across as a very strict and genial farmer, he certainly won the hearts of many Goan farmers in the audience. Including the Chief Minister of Goa Dr Pramod Sawant who was all smiles and claps, with Governor Pillai making his own notes, on the dais; I don’t know about Agriculture Minister Ravi Naik though.
I found the governor of Gujarat’s talk very arguably useful from the point of view of restoring Goa’s original reputation as an agricultural state, it can be the No.1 state of India because it is so small, pointed out the good governor and I dare say I agree with him.
Elsewhere in the al fresco complex there was an eye-opening exhibition laid out of farm produce from Goa: coconuts, bananas, betalnuts, papayas, pineapples, chikoos, onions, hog plums, root veggies, greens and much more; a stall with all manner of produce courtesy “gau mata.” Take a look at the pics here in a photo essay…