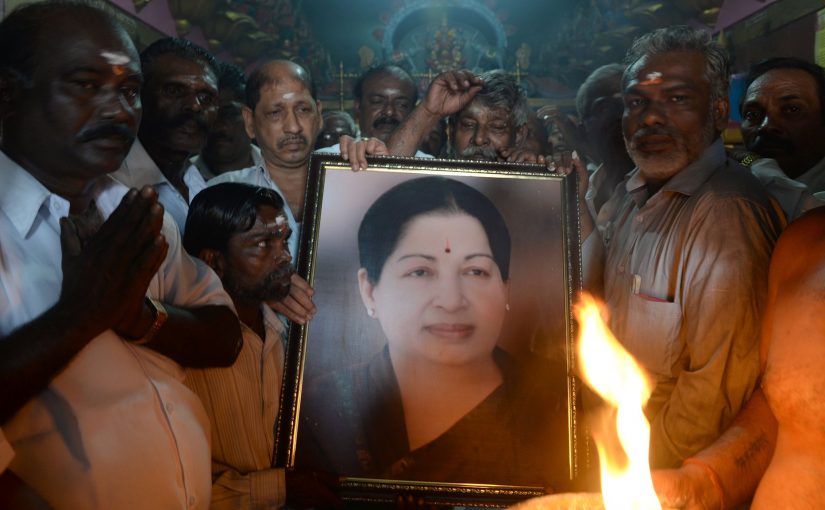 SHOCKED: Party and Cabinet colleagues of Jayalalithaa pray for her recovery outside Apollo Hospital in Chennai holding her photo

Tamil film star who challenged state’s male-dominated politics and went on to become chief minister died in hospital in Chennai on Tuesday night.

Jayalalithaa Jayaram, the “iron lady” of Tamil Nadu, who riveted and ruled the south Indian state for more than half a century as an actor and then chief minister, has died in hospital after suffering a cardiac arrest.

Her death at age 68 was announced shortly after midnight on Tuesday by the Chennai hospital where she had been receiving treatment.

“It is with indescribable grief that we announce the sad demise of esteemed CM,” the Apollo hospital said in a statement.

More than 6,000 security personnel have been deployed in Chennai to maintain order and contain mass outpourings of grief at the news of Jayalalithaa’s death.

Her admission to hospital in September for dehydration and fever inspired weeks of vigils, rioting and self-harm by fervent supporters.

Doctors said she had been recovering well and was scheduled to return home until she suffered a sudden cardiac arrest on Sunday evening.

Her biographer, the novelist Vaasanthi Sundaram, told the Guardian that Jayalalithaa was “the most colourful, dynamic and determined woman politician that one has ever seen.

“She relentlessly challenged the male-dominated, sexist politics of Tamil Nadu that worked relentlessly to block her every step of the way,” she said.

Jayalalithaa had been a glamorous and prolific Tamil film star for nearly two decades when she entered politics in 1982, joining the party of her mentor, MG Ramachandran, himself a former screen star turned chief minister.

Ramachandran’s death in 1987 left a deep split in the All India Anna Dravida Munnetra Kazhagam (AIADMK) party, but Jayalalithaa emerged from the leadership struggle with a grip on the party that only tightened over the next two decades.

As the state’s first female opposition leader, she was once physically attacked in the chamber by MPs from a rival party, emerging with torn clothing and a promise never to return “until conditions are created under which a woman may attend the assembly safely”.

In 1991, she became Tamil Nadu’s first female chief minister to serve a full term, the first of four eventful stints running the south Indian state, including one that ended with her imprisonment on corruption charges in 2014 followed by her release and return to power one year later.

In office, she pioneered alternative energy and water harvesting schemes and reduced the rate of female infanticide by creating centres where parents could anonymously hand over baby girls.

She also became synonymous with generous welfare policies, including programmes to distribute wedding jewellery and cheap meals to the poor, always carefully branded to bolster the cult of personality that formed around her.

“She intervenes in very cultural aspects, such as giving food away. It’s not just calories – food has a great cultural value. If a person gives you food, you are indebted to that person,” he said. “That bond is not an economic bond, it’s a cultural bond … People feel as if they are eating Amma’s food.”

Her supporters’ devotion would swell each February on her birthday: this year’s celebrations, from which she was notably absent, included the distribution of free meals, gold rings to newborns and mass tattooing of her likeness on the arms and bodies of party members.

But she could never shake accusations of corruption, some of which were proved in court. A raid on one her residences in 1997 unearthed 800kg of silver, 28kg of gold, 750 pairs of shoes and more than 10,000 saris.

Rumours of her ruthlessness also abounded. A US embassy cable released by WikiLeaks described her as “the consummate autocrat” whose “total domination” of her party was legendary.

Colleagues were said to refer to her only as “Amma”, “Madam” or “our leader”. “Senior AIADMK leaders, especially men, used to physically prostrate themselves before her to demonstrate their obeisance,” the leaked American cable reported.

“She has become a cult figure – Mother – Amma, the giver and the redeemer,” Vasanthi said. “It was the party’s compulsion to project the leader as supreme, and she fitted the role. She was imperious, enigmatic, and unforgiving.

“It became her obsession to defeat her enemies and win her battle. She seemed to challenge even the messenger of death who stood at her door more than two months ago,” she said.

Jayalalithaa’s remains will be taken to Poes Garden, her official residence. The Tamil Nadu government has announced a three-day mourning period.