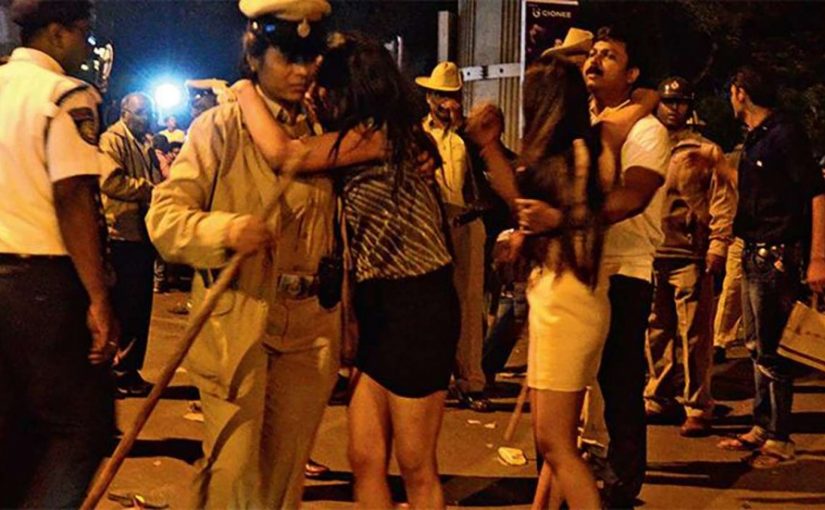 And a few stray thoughts on the molestation of young women who had gathered at the posh Mahatma Gandhi Road in Bangalore to usher in the New Year. They were groped and molested by large groups of men in the presence of more than a thousand cops.

Though  both young men and women had gathered at a place monitored by CCTV cameras, the police have not made any attempt to arrest the culprits. Shockingly, the police force made no attempts earlier to defend the women. Many men had a tough time defending their girlfriends while single women had no one to protect them.

This is not the first time women have been targeted in Karnataka. The state has fanatical groups like the Ram Sene led by Pramod Muthalik who has, in the past, attacked young people celebrating Valentine’s Day. The group also attacked a pub in Mangalore where women from the IT industry were having a party over the weekend. It was because of this violence that Muthalik was prohibited from entering Goa, a ban that has been extended repeatedly. It is a matter of concern that he has now approached the Supreme Court to contest this.

THE most disgusting part of the recent molestation in Bangalore is the insensitive statement of the state Home minister that it was the result of western culture. G Parameshwara attributed the attacks to the so-called provocative clothes worn by women.

He believes that women should be dressed only in saris and salwar kamiz. Even young women dressed in jeans and tops are considered to be inviting unwelcome attention and violating Indian culture.

Even more shocking is the statement made by the Samajwadi party chief of a cosmopolitan city like Mumbai. Abu Azmi had the impudence to suggest that if there was sugar, ants did not require any invitation, suggesting that women who wore western clothes were like sugar with an irresistible attraction for goons. Thank God Goa continues to be a civilised state where women can still wear whatever clothes they like at any time of the day or night.

And a few stray thoughts on the anti-climax marking the end of the 50 days after the `500 and `1000 notes were scrapped. There was a fear that at the end of the 50 days, prime minister Narendra Modi would subject Goans to even more tapasya. Fortunately, no drastic actions materialised. Still no extension was granted and an ordinance was issued scrapping the old `500 and `1000 notes permanently. Even the window of exchanging the old notes at the Reserve Bank of India (RBI) until March 31, 2017 was closed.

Due to the demonetisation, everyone was forced to deposit savings in cash in banks. In India, there are many senior citizens who prefer to keep their savings in cash at home as they do not trust banks. With the government threat that from December 30, 2016 the RBI would stop honouring the promise of exchanging the old notes, they had no choice but to deposits all their savings in banks.

Those in rural areas who did not have bank accounts were forced to open new ones. Now the fear is that those who deposited their hard earned money in the banks will be harassed by the Income Tax Department following Modi’s threat that those who have deposited more than `50,000 in cash will be scrutinised. Even Modi’s advisor Dr Panigrahi, vice chairman of the new avatar of the Planning Commission, has requested him not to penalise those who have deposited less than `2.5 lakhs.

THERE is not much relief even after the 50 days of mushkil that India suffered. Admittedly, the amount that can be withdrawn at the ATM has been increased from `2,000 to `4,500 per transaction. But there is no increase in the limit of `24,000 per week that you can withdraw from your bank account. To make up for the mushkil, Modi has offered some crumbs. Senior citizens have been guaranteed a minimum interest of eight per cent on their fixed deposits if they are willing to block their money for 10 years. The ceiling will be `7.5 lakhs.

Modi has also offered a subsidy in interest for those borrowing money to build or expand their houses if the amount does not exceed `10 lakhs. He has also persuaded banks to lower the interest rate on housing and vehicle loans. State Bank of India has already reduced the interest rate to nine per cent on housing loans.

Banks have a lot of cash now because of the deposits of demonetised notes. In fact, more than 90 per cent of these notes in circulation before November 8 have been deposited in the banks. So the question is, was there any black money at all or have crooks been successful in laundering black money? In any case, it is admitted that only five per cent of black money is stored in currency notes. The remaining is in the form of gold, jewellery and real estate.

AND a few stray thoughts on the divorce between the BJP and the MGP. It has gone beyond the point of no return, with the BJP deciding to contest 37 of the 40 seats in the Goa assembly. It is, however, having problems finding candidates, particularly in South Goa. Many of the minority community candidates who stood on their tickets or with their support in 2012 are not keen on being associated with them this time.

This was dramatised by Avertano Furtado’s rejection of the invitation to contest from Navelim on the BJP ticket. The party has been forced to leave the seats of Velim, Benaulim and Nuvem to independents as it cannot find suitable candidates.

The BJP has virtually decided to deny tickets to at least three of the present MLAs. This includes Sports minister Ramesh Tawadkar who has been implicated in the Ruby building collapse case. Other sitting MLAs likely to be denied a ticket are Ganesh Gaonkar from Sanvordem and St Andre’s Vishnu Wagh who is still in a coma. His wife Aruna’s demand for the ticket has not found favour, though it might go to Wagh’s brother.

The BJP’s biggest problem is leadership. Most MLAs are not happy with the projection of Laxmikant Parsekar as chief minister. It is believed that his chances of getting re-elected from Mandrem are very poor. The Congress is planning to put veteran former MGP leader Ramakant Khalap against him there.

Ideally, the BJP would like Parrikar to return to Goa as chief minister or at least be projected as a candidate. But Parrikar seems to have developed a taste for power in Delhi and nurtures the hope that he could even become prime minister.

MEANWHILE, Francis D’Souza, the Hindu Catholic, has demanded that the Sangh Parivar project him as chief minister to secure the support of the Catholic minority community. There are also strong reservations within the party over the admission of Pandurang Madkaikar and Mauvin Godinho.

Both, the Rashtriya Swayamsevak Sangh (RSS) led by Subhash Velingkar in Goa and Shripad Naik’s followers are against Madkaikar’s admission. Naik himself is keen on becoming chief minister and contesting from Porvorim. His son is also keen on the ticket for Cumbarjua. It is expected that the BJP will get fewer seats than the Congress got in the last assembly election in 2012.

And a few stray thoughts on Parrikar losing his temper with media. During the Maha Melava in Vasco to welcome Mauvin Godinho to the BJP, many journalists asked Parrikar whether he had forgotten the power scam. It was Parrikar who had filed the first police complaint against Godinho for misusing his position as Power minister to offer illegal rebates to steel rolling mills. Subsequently when Godinho became an ally, Parrikar tried to withdraw the complaint.

The Defence minister’s explanation was that the amount paid to the mills in violation of the cabinet decision had been recovered. He admitted that Godinho had attempted a scam. The BJP government however had prevented it by recovering the money. Since the money was recovered, there was no harm in taking Godinho back into the BJP.

The media was not convinced by Parrikar’s logic and started an argument with him. This provoked the short-tempered minister who asked them to take off all their clothes and dance. This made the media even angrier and Parrikar had to be rescued by the police.

The second time he had to be rescued was when his car was trying to overtake and had an accident near Mandovi hotel. The car owner was upset and fought with Parrikar who had to be moved to another car to avoid an ugly scene. Since Parrikar has been in Goa for almost a week now, people are wondering who is running the defence ministry.

AND a few stray thoughts about the Election Commission. There is no doubt the commission is among the best in the world and has very successfully conducted free and fair elections in the world’s most populous democracy. Unfortunately, it has not been vested with enough powers by the central government and parliament. It is out of its desire for clean and fair election that the Election Commission requires all candidates to submit details of their criminal records, assets and liabilities. But it does not have the manpower to check the truth of the declarations. It also does not have the power to disqualify candidates who make false declarations or undervalue their assets.

The biggest joke about the Election Commission is its inability to prevent the abuse of money and muscle power in election after election. According to the rules, no candidate contesting an Assembly election can spend more than `10 lakhs. The ground reality is that even in a small state like Goa every serious candidate spends more than `10 crore. Though the Election Commission deputes expenditure observers to keep an eye on abuse of money power, not only kebab and sharab but even television sets and bikes are distributed by candidates.

The biggest weakness is that it has very little staff. All officials conducting the elections are taken on deputation from central or state governments. Those in charge of the polling booths are mostly school and college teachers. The future of government employees on poll duty, including the police depends on the politicians. Therefore they mostly ignore the crimes committed by candidates.

The candidates with rare exceptions do not complain against each other because they are all chors. This is why despite the best efforts of the Election Commission, money power and gundagiri still play a major role in elections. There is no other explanation why corrupt people like Babush Monserrate, Mickky Pacheco and Churchill Alemao keep getting re-elected. It is the game of paisa feko aur tamasha deko.

And a last stray thought for yet another Saturday. The Begum and Nawab of Bollywood Kareena and Saif Ali Khan Pataudi have angered even their parents by naming their newborn son Taimur.

The choice of name is certainly strange considering that Taimur was the biggest butcher among Mughal kings. He is reported to have killed the largest number of people not only during his raids in India but even in his battles against other countries in Afghanistan and other parts of Asia.

It is not as though Taimur was a noble and great emperor like Akbar or Shah Jahan. Even the couple’s parents – Randhir Kapoor and Babita Kapoor and the senior Begum Sarmila Tagore who married the former Nawab of Patuadi – were not amused with the choice of the child’s name. We only hope that young Taimur does not grow up to be a monster like his namesake.