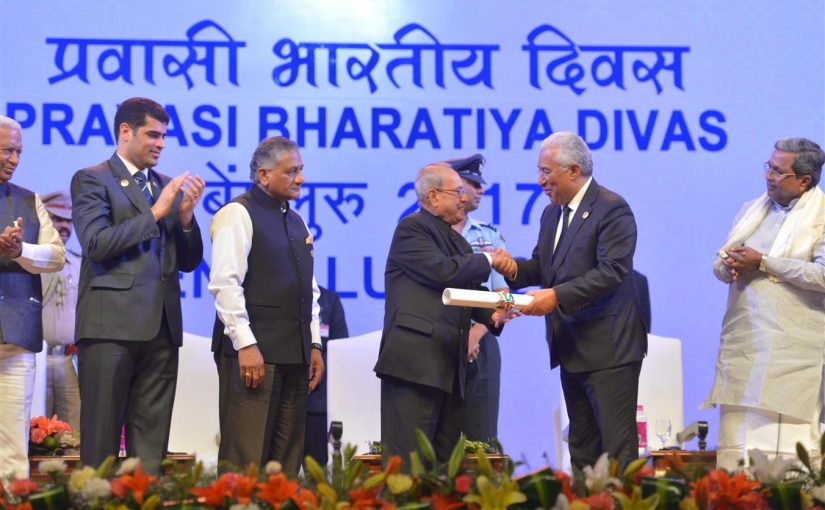 AWARDED: Portuguese prime minister António Costa was among the distinguished citizens of Indian origin honoured by President Pranab Mukherjee at the Parvasi convention in Bangalore

AND a few stray thoughts on the confusion over the code of conduct and the application of various provisions of the Representation of People’s Act which governs elections in India. The code comes into force the day the election schedule is announced for a state. It is primarily targeted at ruling parties and is enforced to ensure they do not misuse or abuse power in the run up to the polls.

Under the code, the ruling party and outgoing government – which in Goa is the Bharatiya Janata Party (BJP) headed by Laxmikant Parsekar – cannot take any policy decisions after December 2, when election dates were announced. This means that the government cannot undertake any fresh recruitment as the Congress party did before the 2012 election. In fairness to the BJP, Parsekar cancelled even the ongoing process for new appointments much before the code came into force.

His government did however try to rush through the Outline Development Plans (ODPs) of various urban areas. Town and Country Planning minister Francis D’Souza declared that the ODPs of Panjim, Mormugao and Mapusa were passed the day before the poll schedule was announced. Only the implementation for Margao was stalled following opposition from the municipal council headed by Babita Angley and a public interest litigation (PIL) in the high court. D’Souza, who has ambitions of becoming the first Catholic chief minister of a BJP state, also passed some parts of the Regional Plan 2021.

UNDER the code, the government is reduced to being a caretaker. It is forbidden from taking policy decisions, and ministers cannot use official vehicles to canvas votes for themselves or the party. They must surrender their official cars and personal staff the moment the schedule is announced. They also cannot attend or at least preside over public functions.

This is probably why the Portuguese prime minister was not received by Parsekar. We do not understand in what capacity deputy chief minister Francis D’Souza welcomed him. Ideally, since the code of conduct is in place, the chief protocol officer or governor – both of whom are non-political – should have received him.

The provisions of the Representation of People’s Act governing the conduct of parties and candidates comes into force only when the nomination process begins as individual candidates are not officially ‘candidates’ until their nominations have been accepted by the returning officer.

The candidate is officially contesting the election only after the last date for withdrawals and final scrutiny of their affidavits. Candidates, particularly independents, cannot be hauled up for distributing gifts to voters or indulging in paid news.

We are bringing this up in the context of a notice served to us by the media committee of the returning officer of South Goa district. The committee has alleged that a report on a press conference by aspiring independent candidate Kenneth Silveira who is taking on Mauvin Godinho is suspected to be paid news. It also claimed that a planner sponsored by Silveira was paid for, even though we have made it clear that it was an advertisement and not editorial content.

IN ANY case, neither the report not the planner should have attracted the committee’s attention as at the time they appeared, Silveira had not filed his nomination and was therefore not a candidate. To the best of our knowledge, the only possible interpretation of the Act is that it applies only to candidates who have filed their nominations and whose nominations have been accepted by the returning officer.

We do not know what checks and balances the Election Commission has put in place to ensure that all officials, including members of the media committee, are free of bias and are not chamchas of the ruling parties. While features favouring a candidate are considered suspect, views expressed as news in sections of the press are accidently or deliberately overlooked by the Commission.

For instance, the alternate front page of the Herald on January 11 is probably bought and paid for by Goa Pradesh Congress Committee (GPCC_ president Luizinho Faleiro. Quite apart from the report attributed to Team Herald, the page also has an item called Herald View, which is clearly an editorial comment accusing Pratap Singh Rane and Digambar Kamat of trying to hijack candidate selection. This is obviously a plant by Faleiro to mislead Goans on his own conspiracy to concentrate all power and realise his ambition of becoming chief minister.

And a few stray thoughts on kingmakers being in greater demand than kings in virtually all parties. The Congress for instance is not confident of getting a majority or even the nine seats it secured during the last election. There is a battle between its two factions. The party seems to be unanimous that it cannot win the elections by itself. The factions are divided on whose help they require.

Faleiro presumably believes that the best bet as an alliance partner is the Nationalist Congress Party (NCP) controlled by Churchill Alemao in Goa. The rival faction led by Rane and Kamat want a wider alliance including Goa Forward, the United Goans Democratic Party and the NCP. The wind seems to be blowing in favour of a larger alliance.

THE desperation to get winnable candidates is not limited to the Congress. The BJP is equally desperate, particularly after several South Goa minority community MLAs have declined to be associated with it. Navelim independent Avertano Furtado who has been supporting the BJP and even served as a member of the cabinet has declined Parrikar’s invitation to join the party.

Similarly, Velim MLA Benjamin Silva is trying to distance himself from the BJP. It is clear that minority community sitting MLAs, at least in Salcete, are not in favour of contesting or taking BJP support in the 2017 elections. There is a lot of heart burn within the BJP itself over the party decision to give tickets to defectors from the Congress like Mauvin Godinho and Pandurang Madkaikar. There is suspense on whether the BJP will also give a ticket to Pravin Zantye who contested the last election on a Congress ticket.

The BJP is facing a major challenge in the stronghold of former chief minister and current Defence minister Manohar Parrikar. For him, retaining the Panjim assembly seat is a matter of prestige. When he moved to New Delhi as Defence minister and gave up his seat, he got close confidante Siddharth Kunkolienkar elected as Panjim MLA. But this was possible only after Parrikar entered into an understanding with Babush Monserrate, who announced he was contesting the election but withdrew in favour of Kunkolienkar.

This time, Monserrate is determined to contest from Panjim, leaving Taleigao to wife Jennifer and nominating his good friend Tony Rodrigues – owner of the Rosary High School, Miramar – for Santa Cruz. Besides the challenge from Monserrate, Parrikar will also have to overcome an even bigger challenge from close friend and host in Panjim Raju Sukerkar, the North Goa Rashtriya Swayamsevak Sangh (RSS) chief contesting on a Bharatiya Bhasha Suraksha Manch (BBSM) ticket.

The MGP is also hunting for candidates it can persuade to jump over from other parties. It was actively wooing Madkaikar who then decided the BJP was a better bet. But the MGP has managed to persuade Naresh Sawal, who was linked with Goa Forward, to join the coalition which includes BBSM and the Shiv Sena.

THE major parties are delaying the announcement of their candidates out of the fear that those who do not get tickets will jump to rival parties. Even the Goa Suraj Party has not been spared, with tiatrist Wilson Mazarello resigning to contest as an independent.

As far as the AAP is concerned, they have the advantage of announcing candidates for most seats well in advance. But their problem seems to be that they have taken decisions in a hurry only to repent at leisure.

The AAP has already replaced two candidates against whom there have been charges. Another candidate has quit. I hope when the final list is released there will not be 29 candidates with criminal records like in Delhi.

He is desperate to become a full chief minister, which can happen only in a state as Delhi is a union territory where the lieutenant governor is the boss and the chief minister has no control even over the police.

And a few stray thoughts on the demand of Sudhin Dhavlikar, the chief minister designate of the MGP alliance, that Portuguese prime minister Antonio Costa should apologise for the destruction of temples during colonial times.

Costa, who considers himself a socialist if not a communist who opposed dictator Antonio de Oliveira Salazar, should certainly apologise for the much greater time of denying Goans the benefit of education. I personally believe the biggest crime the Portuguese committed was to deny educational facilities to Goans.

During Portuguese rule, there were very few schools and even these were in Portuguese or Marathi. There were no schools in Konkani, Goa’s mother tongue. Even worse, those who were lucky enough to go to school could study only up to Class 10 and had to go to British India or Portugal for higher studies. Costa and his siblings themselves left Goa for higher education.

The Portuguese may claim that they started the first medical school in Asia – now the Goa Medical College (GMC) – but they did this to meet the requirements of Portuguese soldiers in their colonies in Africa and not for the benefit of Goa.

Costa should perhaps also apologise for two traditions or bad habits which are considered a legacy of the Portuguese. The first is the rampant alcoholism in Goa. If Goa has so many bevdas, it is because the Portuguese encouraged drinking to keep the population in a state of stupor so that they would not revolt.

THE credit or discredit for the popularity of cashew feni should go to the Portuguese as it was they who bought cashew to Goa. During the opinion poll, one of the major objections to the merger was the fear that the excise on liquor – which is the lowest in the country – would be increased.

In fact, the greater fear was that liquor would be banned as there was prohibition in Maharashtra then. Costa must also apologise for the susegad tradition which still continues with all shopkeepers, except bars, shutting for a siesta between 2pm and 4pm.

And a last stray thought for yet another Saturday. Legally the RBI is the authority which issues currency notes which bear its governor’s signature. Only the RBI can take the decision to demonetise any denomination of currency notes. It is only with the consent and recommendation of the RBI that the Finance minister or prime minister scrap `500 and `1000 notes.

But the truth is now out. It is not the RBI which initiated the scrapping of `1000 and `500 notes. It was prime minister Narendra Modi. It is the sin of RBI governor Urjit Patel that he meekly obeyed orders. His predecessor Dr Raghuram Rajan would not have agreed as it has had no impact on the war against black money.

It is now been admitted that more than 95 per cent of the notes withdrawn from circulation have been deposited in the banks.

The Parliamentary Accounts Committee (PAC) has summoned Patel and Modi on why and on whose authority the notes were scrapped. Why were alternate arrangements not made?

The RBI has admitted that they started printing `2000 notes as early as in May 2016. But as on November 8, when the notes were scrapped, they had managed to print only five per cent of the money that had been withdrawn.

The PAC has also asked Patel whether he has any authority to put a limit on the amount a depositor can withdraw from his own account. It has gone to the extent of warning Patel that if under the rule he has no authority to ration withdrawals, criminal action could be taken against him.