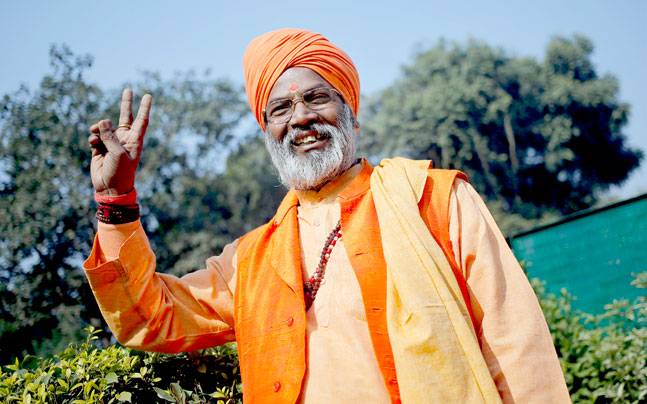 SHUT DOWN: The first causality of the Supreme Court order barring appeals for votes on the basis of caste, community or religion is Sakshi Maharaj against whom a first information report has been registered for insisting that Muslims were responsible for India’s huge increase in the population

Neither Bandhari Swami Brahmeshranand, Bishop Filipe Neri Ferrao, any priest or even former language fanatic Subhash Velingkar can appeal for votes on the basis of Religion, Language and Caste following the Supreme Court Judgement making candidates liable to disqualification

From January 2, 2017, no Hindu swami, Muslim maulana, Catholic priest or language fanatic like the Bharatiya Bhasha Suraksha Manch’s (BBSM) Subhash Velingkar will be able to get away with making any appeals to voters on the basis of caste, religion, race, community or language.

In the past, political parties and candidates could be disqualified only if it was proved that they had launched a systematic campaign in the name of religion, caste, community and language. Following the verdict of Supreme Court chief justice T S Thakur on January 2, even a single appeal on these grounds would be sufficient to annul the election. This means that the candidate will be liable to disqualification and the person or persons who made the appeal would be liable for prosecution.

THE administration at the centre and states has already started implementing the Supreme Court’s latest verdict. A member of Parliament from Uttar Pradesh, among the states for which elections have been announced in February, has attracted its wrath.

A first information report has been filed against the Bharatiya Janata Party’s (BJP) Sakshi Maharaj for claiming that the explosive population growth in the country is because of Muslims. Addressing a public rally as part of the BJP campaign in Uttar Pradesh, he insisted that the fact that Muslims could have seven wives was responsible for the huge increase in their population which is threatening the Hindu majority. This was an echo of prime minister Narendra Modi’s statements in the run up to the a parliamentary elections – Hum panch aur hamara panchpan – with reference to the Muslim community.

The Supreme Court verdict has cited examples to clarify the dividing line between provocative statements which would make the candidate liable for disqualification. “You cannot make it an election issue if you say, ‘Do not vote for him. He is a Bengali’ or ‘Do not vote for him. He is a Khasi’. I made it unequivocally clear that it is the purpose and design of this House and of the country to ensure that. No man shall appeal only because he speaks a particular language and should get voted for that reason; or no man shall appeal against a particular person to the electorate solely because that opponent of his speaks a particular language.

But, if you say, ‘I am a Bengali, you are all Bengalis, vote for me’, or ‘I am an Assamese and so vote for me because you are Assamese-speaking men’, I think, the entire House will deplore this as a hopeless form of election propaganda. And, no progressive party will run an election on that line”. Similarly, no appeals can be make on the ground of religion for votes.

The Supreme Court has referred to the high court judgement of Kultar Singh v Mukhtiar Singh and said that a candidate appealing to voters in the name of his religion could be guilty of a corrupt practice under Section 123(3) of the Act if he accused a rival candidate, though of the same religious denomination, to be a renegade or a heretic. “The appellant had made a direct attack of a personal character upon the competence of Chagla to represent Muslims because Chagla was not, according to Bukhari, a Muslim of the kind who could represent Muslims. Nothing could be a clearer denunciation of a rival on the ground of religion. In our opinion, the high court had rightly held such accusations to be contraventions of Section 123(3) of the Act.”

THE Supreme Court has further clarified that Section 123(3) of the Representation of People Act, bars a candidate or his agent or any other person with the consent of the candidate or his election agent to seek votes or refrain from voting on the ground of the candidate’s religion. A case is cited where a Rajput had campaigned that the electorate should vote for him because he was a Rajput. The court had upheld the charge that the candidate was guilty of a corrupt practice.

The implication of the Supreme Court judgement is that Archbishop of Goa Filipe Neri Ferrao cannot issue any guidelines as he had threatened to at his a service on December 28, 2016 as this would entail the disqualification of the minority community candidate and action against the archbishop.

Similarly Velingkar and other BBSM leaders cannot appeal for votes on the basis of opposing grants to English-medium primary schools run by the church. This is liable to be interpreted as an appeal made on the basis of language. Candidates of the Bhandari Samaj such as Ravi Naik and Shripad Naik cannot claim they have the blessing of the Kundaim Mutt Swami Brahmeshanand who has a very large following among the Bahujan Samaj.

The Supreme Court order is likely to affect all political parties and candidates in Goa. It will affect the BJP which has been making appeals in the name of religion. Even statements by chief minister Laxmikant Parsekar and others claiming that more tickets will be given to Catholic candidates could be interpreted as an appeal to religion.

SIMILARLY, the Maharashtrawadi Gomantak Party (MGP) could land itself in trouble if it seeks votes on the basis of the allegiance of the top readers to the controversial Sanathan Sanstha. Even Saraswat leaders can incur disqualification for statements objecting to reservations for Other Backward Classes on the claim that this would affect the jobs and education prospects of Saraswat youth who are being forced to migrate from Goa.

The unfortunate part of the various amendments to the Representation of Peoples Act and judgements or even the highest court in the country is that there is many a slip between the cup and the lip. The fatal flaw in the latest verdict of the Supreme Court is the caveat that the candidate will attract disqualification only if it can be established that the provocative appeal in the name of religion, caste, community or language was made with the consent of the candidate.

Babush and Jennifer Monserrate can always claim that Fr Conceicao made the appeal during Christmas mass to support the couple on his own, without their knowledge and consent. The challenge before those who had been lamenting the communalisation of politics, particularly after Narendra Modi became prime minister is that they will have to prove that various provocative remarks were made with the consent of the candidate.

A consolation is that people like Sakshi Maharaj making provocative remarks will now be more cautious over dividing the people on communal lines.