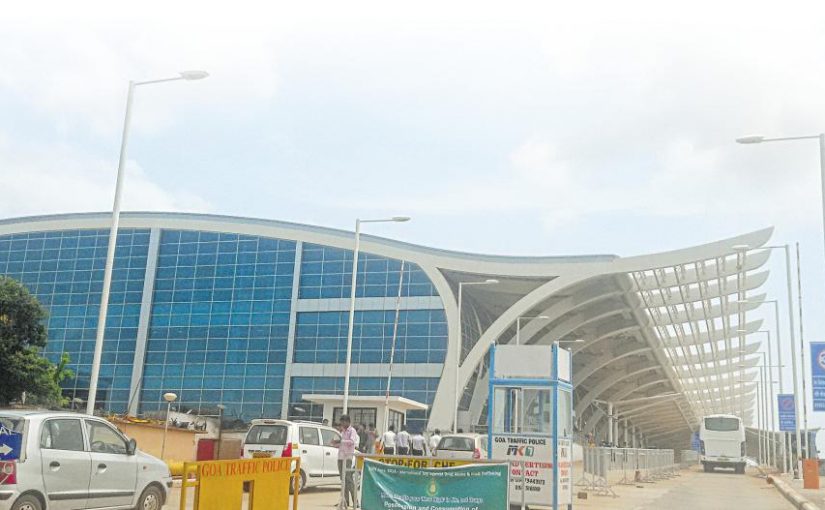 CALL TO ACTION: Many fear that the Goa International Airport in Dabolim, which provides many jobs and aids tourism in south Goa, will be taken over by the Navy after the new Greenfield Airport in Mopa comes up

If you have ever witnessed a drowning man just before he sinks, then you will have seen that he puts his hands up and tries to scream for help. But the scream is drowned with more water gushing down his throat.

You are seeing just that in this post, which may perhaps be a bit stretched or long-drawn, but is just right for a cause, a cause that should wake up our sleeping Goans and equally so, our elected representatives in the present Bharatiya Janata Party (BJP) government along with the lackeys, namely Avertano Furtado, Benjamin Silva and Caetano Silva supporting it from the outside, and with all others trying to find a place in Goa’s governance once again in 2017 elections.

The thing that has finally made me write this post is my deep-rooted concern, a desperate heart-wrenching emotion that needs to be expressed equally by all Goans before it is much too late. I am speaking about Mopa airport that is going to be Goa’s Waterloo, no matter what anybody says or feels. Let me explain why.

Mopa, to me, is a serpent that will devour our beloved Dabolim airport. It is a well-known fact that the moment Mopa raises its serpentine head as the unwarranted duplicate airport, within weeks, if not months, our centrally located Dabolim airport will be devoured by another serpent. The Indian Navy has been lying in wait since 1961.

It is said that a pet python wraps itself around the body of its master, taken as showing its gratitude and love but the real reason is because it is sizing-up for its next large meal for which it has been starving itself for a long time.

Similarly, the Navy has been working in cahoots with the old Congress government in Goa for years, tempting the top brass to look at Mopa as an alternative airport. The Goa-BJP, headed by Manohar Parrikar, was against Mopa at that time just because it was proposed by the Congress, as anything proposed by its arch rival needed to be opposed as its raison d’etre.

But the wind started blowing in the other direction with the vested interest lobby, mainly of mega builders from Maharashtra, falling at Parrikar’s feet wanting to flood his ‘out of office’ party with funds to stage a comeback, which was a welcome relief.

But then, there was an insurmountable hurdle within, enticed and brought in with a promise of making him a king, and this hurdle had to be neutralised or erased from the scene. This hurdle was the vociferous tiger of Goa Matanhy Saldanha, for whom Dabolim was non-negotiable and Mopa was out.

Having seen him six feet in the ground with a 21-gun salute, the backdoor merger of Goa into Maharashtra was a fait accompli, with the bull-dozing of Goa’s scarce land for the crazy four-lane highway to hell, with an unnecessary third bridge over the Mandovi river, all at the cost of the already scrounging Goan tax-payer, with assurances galore given that Dabolim Airport will function even when Mopa is commissioned.

What is not understandable is the laying of the Mopa airport foundation stone at far away Taleigao, in a sports stadium, by none other than prime minister of India Narendra Modi. In the Goan context ‘korjota eke koden ani khorpita boltech koden’ [meaning, it scratches ‘here’ and you scratch ‘there’?].

Do consider the following and see if it makes sense.

1- Within weeks of Mopa being operational, the Navy will force all commercial flights to the new airport so it can carry out sorties in preparation for an imaginary ghost war.

2- Dabolim airport, where crores of Goa taxpayers’ money has been spent for added infrastructure, will simply be digested by Navy for free

4- With tourism moved to Maharashtra, will five-star hotels and businesses that thrive on tourism in South Goa continue to do business as usual?

5- Will it not be a total ruin of our beautiful Goa which will now be sitting like an old widow thinking back on its old glory and crying bitter tears?

6- Where are our Goa leaders who want to save Goa gone? Why have the political parties already put their collective hands up in the air and given up on Dabolim with an artificial belief that Mopa and Dabolim will co-exist in partnership.

7- Why are the leaders named above and many others, not thinking of Goa as their responsibility for the next generation, that it needs to be saved from this disaster?

8- Why can’t these leaders realise that these destructive forces, having failed to merge Goa into Maharashtra in the Opinion Poll of 1967 –the Bandodkars, Ranes, Ravi Naiks, Davalikars, etc. – are now using the age old Scorch the Earth theory and thinking that they can teach the South Goa population a lesson by taking their pride and passion, the Dabolim airport, away from them for good and leaving them to lick their wounds while watching Goa slip down into the gutters of oblivion in front of their eyes? These mergerists were waiting for all these years to teach South Goans a lesson, and with Mopa, they want to bury our Goans, our pride and our traditions in a mass grave so that once this grand funeral is over and done with, raised on this huge grave will be a tombstone reading ‘Here lies our much beloved Goa, buried not six feet but a thousand feet under the ecological haven that is Mopa’.

The events that are happening in Goa have troubled me terribly over the past few months, especially, the fact that the mergerist leaders assisted by political parties viz Maharashtrawadi Gomantak Party, Shiv Sena and Rashtriya Swayamsevak Sangh combine, will also push for Marathi as Goa’s official language, having succeeded in allowing the Navy to swallow our Dabolim Airport.

At first, it was the Anjediva Island. Now, it is our Dabolim airport. Nobody must believe the snake in the grass, Manohar Parrikar, who swears that both airports will function after Mopa. The Liar #1 to the core, he and his U-turns, along with his BJP, should be banished from Goa for good. Like it is said, they should be ‘hanged, drawn and quartered’ out of Goa, if Goa has to be saved from this unique monumental disaster.