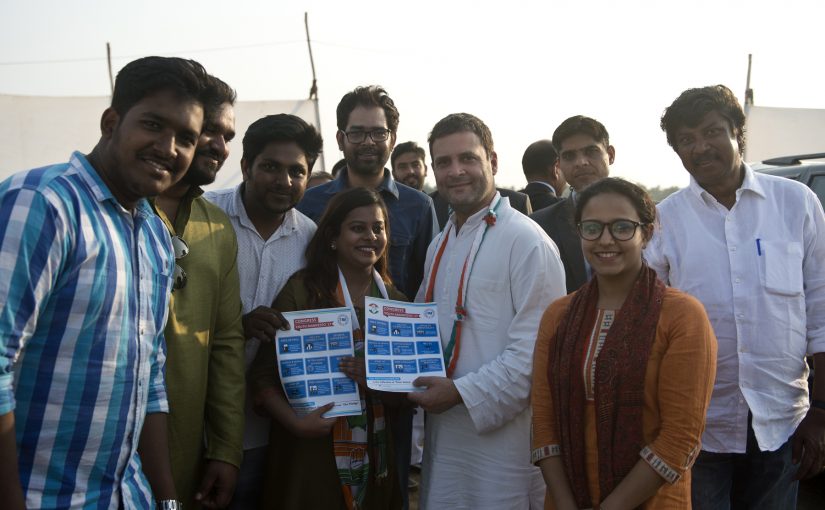 POLL SUPPORT: Yuva Congress members meet Congress vice president Rahul Gandhi after his rally near the Bodgini temple in Mapusa on January 30 to galvanise votes for the party ahead of the Legislative Assembly elections in Goa later this week

Prime minister Narendra Modi was in Goa to fool Goans one more time. Goans have very tough questions to ask him. Will he answer them? Does he have the courage? Here are the questions:

These questions were framed by a group of Goans. Can the BJP answer them?

THIS drama that Subhash Velingkar, Sudin Dhavalikar and Manohar Parrikar are playing for the Goan public is all a farce. They are just manipulating the electorate to give different alternatives where the sitting BJP MLA faces a realistic public opposition. In all constituencies where the BJP expects to lose due to anti-incumbency, MGP & its allies have put a strong alternative candidate. But they don’t have candidates against preferred BJP candidates in Panaji, Fatorda, Taleigao and other BJP strongholds.

There is no serious opposition to Damu Naik from Dhavalikar and Co. Vijay Sardessai is the only challenge and Goa Forward votes will be split. Since there is a strong anti-incumbency in Pernem and Mandem, MGP has fielded good candidates. Sukerkar was a strong opponent to the BJP candidate in Panaji and would split votes. Now the GSM candidate is mostly silent compared to Sukerkar.

In Cumbharjua, MGP is supporting a weak independent candidate. BJP has fielded Madkaikar, a three-term MLA.  Even Babush Monserrate and Rohan Khaunte have kept themselves aloof from the Congress and BJP. Obviously, they expect to join the ruling administration and/or get support post- elections to strengthen their hold over their respective constituencies.

Parrikar and Dhavalikar have openly stated that they are open to a post-election alliance. BJP and MGP and allies are faking opposition. They are trying to fool Goa. In reality, they united underground. The communal vote is not split, it is still united!

On January 20 immediately after Donald Trump’s inauguration, the Obama family moved to a rented apartment, after spending eight years at the White House. The Obamas don’t own a house and paid for everything from their own pocket. Even the family vacation was not free.

Similarly, after the ceremony, Joe Biden, Obama’s deputy, carried his own brief case and took the train to get back to his hometown.

Incredible examples of personal integrity by two of the highest ranking office holders of the sole super power; Biden held public office for 43 years yet he couldn’t afford to pay for his son’s expensive cancer treatment anymore. His son was attorney general of the state of Delaware. He was also an Iraq war veteran, but his treatment ate up his savings.

Then his father came to the rescue, but even that was not enough. When he planned to sell his house to fund the treatment, Obama loaned him money from his personal savings. Biden himself recounted this before a TV audience with tearful eyes. Unfortunately, the son died but not after the father had given all his best.

Neither Obama nor Biden boast tons of money, multiple houses and fleets of cars escorted by massive security after all these years at top posts. And with heads held high, they walk out of their official residences to rented homes and public transport.

The less said the better about politicians in India!

THE BJP has never played religion-centric politics since its inception and has never ever mixed religion in politics to garner votes in this country, Home minister Rajnath Singh claimed, recently. If what he said is 100 per cent true then how did the BJP (whose actual tally was just two in Parliament in 1984) manage to storm many more seats at the Centre and in so many states so fast? Isn’t that by instigating the majority community over the years by playing divisive Hindutva politics and spreading hatred against minorities by raising issues like the construction of Ram Mandir at Ayodhya, forced conversions, beef, love-jihaad, etc?

Even today, though the Supreme Court recently warned all political parties not to use religion during the elections, the BJP in Uttar Pradesh is once again daringly promising the construction of a grand Ram Mandir at Ayodhya through its much-hyped manifesto. Doesn’t this amount to violation of code of conduct? Why is the Election Commission still refusing to take stern action against the BJP in Uttar Pradesh for mischievously begging for votes in the name of religion?