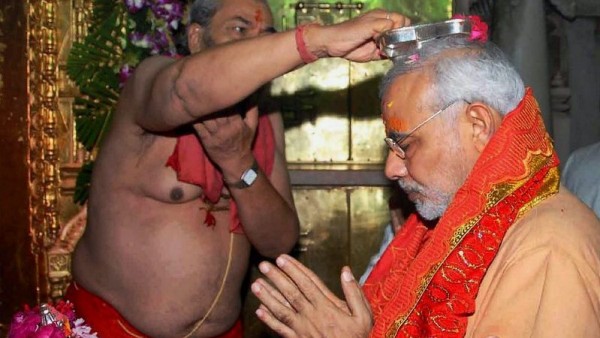 DEMOCRAT: When politicians address rallies, the people want to hear a democrat who carries the peoplehood of India with him, not an emperor who issues decrees to the minorities

Gopalkrishna Gandhi, grandson of Mahatma Gandhi, refers to prime minister Narendra Modi’s attempt to reach out to Muslims ahead of his 2014 election by asking them to hold a Quran in the one hand and a laptop in the other, and points out that the counter visual is of a thug wearing the mask of a Hindu, holding the Ramayana in one hand and the trishul in the other hand

Gopalkrishna Gandhi writes to prime minister Narendra Modi ahead of his ascent to the seat of power in 2014. His words continue to ring true as advice for the candidates to our Legislative Assembly even as Goa goes into polls this weekend

This comes with my hearty felicitations. I mean and say that in utter sincerity, which is not very easy for me to summon, because I am not one of those who wanted to see you reach the high office that you have reached. You know better than anyone else, that while many millions are ecstatic that you will become prime minister, many more millions may, in fact, be disturbed, greatly disturbed by it.

Until recently I did not believe those who said you were headed there. But, there you are, seated at the desk at which Jawaharlal Nehru sat, Lal Bahadur Shastri did, and, after a historic struggle against Indira Gandhi’s Emergency, another Gujarati, Morarji Desai did, as did later, your own political mentor, Atal Bihari Vajpayee. Those who did not want you there have to accept the fact that you are there.

Despite all my huge misgivings about your deserving that rare privilege, I respect someone coming from so sharply disadvantaged a community and family as yours, becoming prime minister of India. That fulfils, very quintessentially, the vision of our egalitarian Constitution.

RevisIting the idea of desh

WHEN some spoke rashly and derisively of your having been a “chaiwala”, I felt sick to my stomach. What a wonderful thing it is, I said to myself, that one who has made and served chai for a living should be able to head the government of India. Far better bearing a pyala to many than being a chamcha to one.

But, Mr Modi, with that said, I must move to why your being at India’s helm disturbs millions of Indians. You know this more clearly than anyone else that in the 2014 election, voters voted, in the main, for Modi or against Modi. It was a case of “Is Narendra Modi the country’s best guardian — desh ka rakhvala — or is he not?”

The BJP has won the seats it has because you captured the imagination of 31 per cent of our people (your vote share) as the nation’s best guardian, in fact, as its saviour. It has also to be noted that 69 per cent of the voters did not see you as their rakhvala . They also disagreed on what, actually, constitutes our desh. And this – the concept of desh – is where, Mr Modi, the Constitution of India, upon the authority of which you are entering the office of prime minister, matters. I urge you to revisit the idea of desh.

IN INVOKING unity and stability, you have regularly turned to the name and stature of Sardar Vallabhbhai Patel. The Sardar, as you would know, chaired the Constituent Assembly’s Committee on Minorities. If the Constitution of India gives crucial guarantees – educational, cultural and religious – to India’s minorities, Sardar Patel has to be thanked, as do other members of that committee, in particular Rajkumari Amrit Kaur, the Christian daughter of Sikh Kapurthala.

Adopt, in toto, Mr Modi, not adapt or modify, dilute or tinker with, the vision of the Constitution on the minorities. You may like to read what the indomitable Sardar said in that committee.

‘Why is there, in so many, so much fear, that they dare not voice their fears?’

It is because when you address rallies, they want to hear a democrat who carries the peoplehood of India with him, not an emperor who issues decrees. Reassure the minorities , Mr Modi, do not patronise them. “Development” is no substitute to security. You spoke of “the Koran in one hand, a laptop in the other”, or words to that effect. That visual did not quite reassure them because of a counter visual that scares them – of a thug masquerading as a Hindu holding a Hindu epic’s DVD in one hand and a minatory trishul in the other.

In the olden days, headmasters used to keep a salted cane in one corner of the classroom, visible and scary, as a reminder of his ability to lash the chosen skin. Memories, no more than a few months old, of the riots in Muzaffarnagar which left at least 42 Muslims and 20 Hindus dead and displaced over 50,000 persons, are that salted cane.

“Beware, this is what will be done to you!” is not a threat that anyone in a democracy should fear. But that is the message that has entered the day’s fears and night’s terrors of millions.

It is in your hands, Mr Modi, to dispel that. You have the authority and the power to do that, the right and the obligation as well. I would like to believe that, overcoming small-minded advice to the contrary, you will dispel that fear.

All religious minorities in India, not just the Muslim, bear scars in their psyche even as Hindus and Sikhs displaced from West Punjab, and Kashmiri Pandits do. There is the fear of a sudden riot caused with real or staged provocation, and then returned with multiplied retribution, targeted very specially on women.

Dalits and Adivasis, especially the women, live and relive humiliation and exploitation every minute of their lives. The constant tug of unease because of slights, discrimination, victimisation is de-citizenising, demoralising, dehumanising. Address that tug, Mr Modi, vocally and visibly and win their trust. You can, by assuring them that you will be the first spokesman for their interests.

No one should have the impudence to speak the monarchist language of uniformism to a republic of pluralism, the vocabulary of “oneness” to an imagination of many-nesses, the grammar of consolidation to a sensibility that thrives in and on its variations. India is a diverse forest. It wants you to nurture the humus that sustains its great variety, not place before it the monochromatic monoculturalism of a political monotheism.

What has been taken as your stand on Article 370 of the Constitution, the old and hackneyed demand for a Uniform Civil Code, the Ram Mandir in Ayodhya, and what the media have reported as your statements about “Hindu refugees” in our North and North-West and “Muslim refugees” in our East and North-East, strikes fear, not trust. Mass fear, Mr Modi, cannot be an attribute of the Republic of India. And, as prime minister of India, you are the republic’s alter ego.

India’s minorities are not a segment of India, they are an infusion in the main. Anyone can burn rope to cinder, no one can take the twist out of it. Bharat mata ki jai, sure, Mr Modi, but not superseding the compelling urgency of Netaji Subhas Chandra Bose’s clarion – Jai Hind!

A historic win it has been for you, Mr Modi, for which, once again, congratulations. Let it be followed by a historic innings, which stuns the world by surprises your supporters may not want of you, but many more would want to see you unfurl.

You are hugely intelligent and will not mind unsolicited but disinterested advice of one from an earlier generation. Requite the applause of your support-base but, equally, redeem the trust of those who have not supported you. When you reconstitute the Minorities Commission, ask the opposition to give you all the names and accept them without change. And do the same for the panels on Scheduled Castes and Tribes, and Linguistic Minorities. And when it comes to choosing the next chief Information commissioner, the next CAG (Comptroller & Auditor General), CVC (Central Vigilance Commission), go sportingly by the recommendation of the non-government members on the selection committee, as long as it is not partisan. You are strong and can afford such risks.

MR MODI, there is a southern deficit in your India calculus. The Hindi-belt image of your victory should not tighten itself into a North-South divide. Please appoint a deputy prime minister from the South, who is not a politician at all, but an expert social scientist, ecologist, economist or a demographer.

Nehru had Shanmukham Chetty, John Mathai, C D Deshmukh and K L Rao in his cabinet. They were not Congressmen, not even politicians. Indira Gandhi had S Chandrashekhar, V K R V Rao. I cannot, for the life of me, understand why the UPA (United Progressive Alliance) did not make Professor M S Swaminathan and Shyam Benegal, both nominated members in the Rajya Sabha, ministers.

Imperial and ideological exemplars appeal to you. So, be Maharana Pratap in your struggle as you conceive it, but be an Akbar in your repose. Be a Savarkar in your heart, if you must, but be an Ambedkar in your mind. Be an RSS-trained believer in Hindutva in your DNA, if you need to be, but be the Wazir-e-Azam of Hindostan that the 69 per cent who did not vote for you, would want you to be.

With every good wish as you take your place at the helm of our desh,

I am, your fellow-citizen,