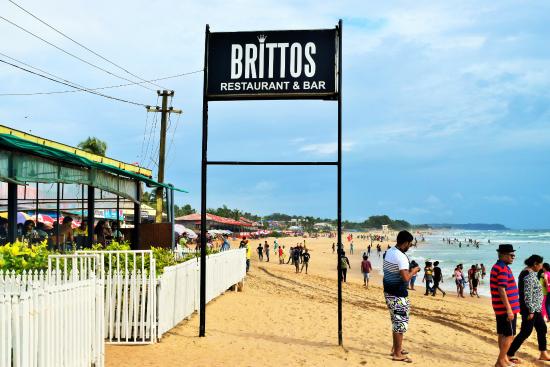 CROWDED: Compared to the 70s, Baga beach is today milling with desi tourists

THE beaches of Goa north and south are really being colonised and some folk say, why not? Who’s pocketing the extra loot, for it must be there. Is it going into the public kitty or in some political pockets? Our politicians have become blackmailers, extortionists and mercenaries. I grumbled as friends visiting from Canada took a shine to Britto’s at Baga and insisted we step onto the beach and settle at one of the myriad plastic dining arrangements across half the beach, cordoned off by rope  and grotesque black sheets to keep the laser beam toy sellers from Jharkhand out!

I’ve always been fond of Britto’s and enjoyed the food. Their desserts are the best this side of town. But this time I was appalled by the 50 per cent takeover of the public beach and wondered if Baga was a public beach anymore. The neighbouring shacks too have spread their range of operations and I was zapped. They were choc-o-blok with young tourists from Bangalore, Hyderabad, Delhi, Pune, Mumbai.

DESI tourism has taken over the old firang hippie tourism a hundred per cent! I remember a time at Britto’s in the early 70s when the only faces were white, a grungy lot perpetually half-naked and three-quarters roasted in solar splendor. I know one is supposed to be in a natural state of being variously undressed on a beach and if not in a lungi at least a sarong, no? Nowadays it’s our desi tourists who follow suit but some do dress for the evening. Otherwise they certainly morph into less inhibitions with ultra shorts and bikinis. They may be dressed like chic Barbie babes, but hear the chatter in pure refined Gujarati or Kannadiga!

THE times, they have changed and we may be young only once and I have been young on Baga beach too in my youth many moons ago. But the 70s were different from today. Staying at the old Calangute GTDC Tourist Hotel I would start at 6am, walk through the dunes from Baga beach to Calangute, on to Candolim, Sinquerim and finally to the old Taj Aguada to sit by the pool and drink lemonade on the rocks, maybe a bite. It was a young heaven and few folk to be seen, so few that if one saw someone, one would be automatically wishing a polite good-morning. One may not ignore a lone fellow beach bum and sometimes it became a fleeting friendship. There were few Indians except for the odd newly-weds dolled up glitteringly in broad daylight to survey the scene, wanting their photos taken. Nobody wanted to sell you stuff either ranging from flimsy attire, cosmetic jewellery to deadly drugs.

I FELT quite safe being alone on the beaches of Goa in the 70s. No longer. I remember one intoxicating moonlight walk from Aguada to Baga river, the star-spangled sea as warm as molten silver or gold. Ah, that was Goa once upon a time. A safe garden of paradise!

Now there are too many folk in the rat race of making a fast buck and so what if someone wakes up dead in a hotel room?

To stay with Britto’s, they’ve really cleaned up the old sossegad act and young waiters take your order on their cell phones, relay it to the kitchen, and in a jiffy your order is on the table – while it is still hot! I’m not so much for hot soups and food, but the others are. The hubby insists on returning things if they’re not as hot as expected! The tables are so closely packed, your neighbours may see what you’re eating and listen in to your conversation and sometimes share secret Goa information.

AFTER the Scarlett Keeling death, I would never trust any children of mine on the beaches here. The men ordered drinks and the two women gin-tonic, fish fingers, roasted papad, French fries and it appeared double quick. The friends ordered fish vindalho, chicken balchao. Being more vegetarian, the hubby and I ordered veggie lasagna. I wanted spaghetti in tomato sauce, asked for fresh grated black pepper but they had none of that. Good portions. Baked cheese cake and vanilla ice cream after that, but the vanilla was not real organic vanilla pod! The hubby of course never likes me to make these comments to spoil someone’s meal.

We tried to relax under the stars and to the sound of the waves, not to make it a jhat pat meal, but then everything arrived jhat pat and soon it was time to vacate the table for a group of students from Bangalore. It was goodbye Britto’s and out on Baga road which has grown steadily cheek by jowl over the years. It’s the best long walk of a street and offers the best shopping in Goa. But I was hustled quickly back into the car to return to Panjim after getting lost several times. Funny, how many times I’ve been to these beaches but I can still get lost!

Laser sellers tried to sell us some slender `600 torches saying the beams went up to five kilometers in the sky, but these are deadly for the eyes, said my Canadian friends, both pediatricians in their 80s but still going strong. They are like annual migrating birds and still want to invest in homes in their native Kerala, never mind that they have several homes in Canada too! They have a large extended family who meet in Kerala once a year and at weddings as they come up, be they desi or half-Caucasian couples with babies on the way.

DOCTORS make for good company and are always worth listening to. I pick up useful tidbits – like do not put your cell phones in your breast pocket. Why? More men are getting yes, breast cancer. And if you suffer from stomach acid reflux, try out this home remedy: Slice a lemon thin, add a litre of boiled cool water, a tablespoon of sodium bicarbonate, stir and store overnight. Drink this the next day and the alkaline water is supposed to work wonders on an overfed stomach. Check it out.

Acid reflux is properly called GERD or gastro esophageal reflux disease. Mostly it happens when we overload the stomach and the one-way ring of muscle valve between the esophagus and the stomach weakens over time permitting stomach contents to return to the lower throat. It can eventually lead to esophageal cancer. Most of us are not conscious of the effects of constantly eating to the brim or gills or so to speak. So try to eat modestly and eat when hungry. Most of us today eat like we don’t know how to eat and how to live either.

I’m giving myself the same advice. We are our own worst enemies and then we like to be one another’s worst enemies, sometimes pretending to be friends. Lately, I’ve noticed that an ego is something only men can afford. Women can’t afford the luxury of having an ego at all. Treat that as food for thought while I go attend another grand shaadi!