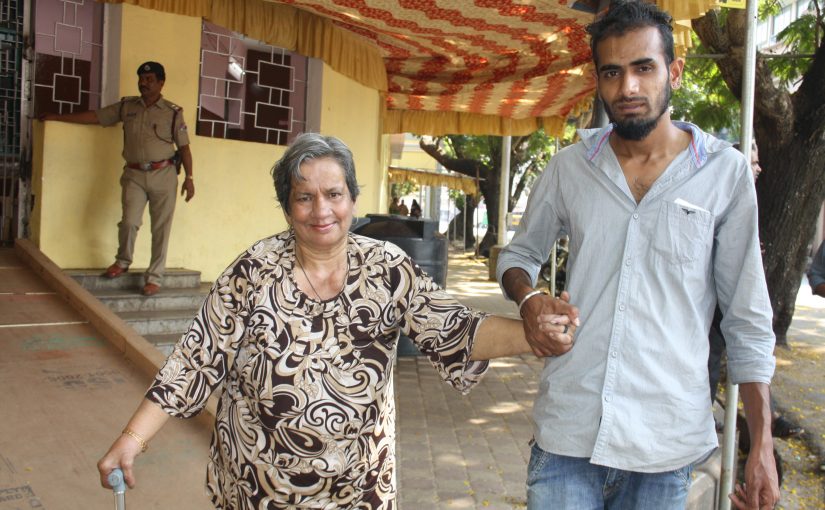 SENIOR CITIZENS WANT TO VOTE! Doing the rounds of election booths on February 4, 2017, we caught this picture of a happy Fatima Mesquita Fernandes after she’d finished casting her vote for the state Assembly elections in Panjim. She said, “I am very proud that I have been able to come and cast my vote despite everything!” Thanks to some help from her son, she was able to make it and said she would not like to reveal who she voted for.
(Pic by Tara Narayan)

THE difference between poor and rich nations is not their age. This can be demonstrated by countries like India and Egypt which are more than 2,000 years old and continue to remain poor. Canada, Australia and New Zealand, which 150 years ago were insignificant, today are developed and rich.

The difference between poor and rich nations does not also depend on available natural resources. Japan has limited territory, is 80 per cent mountainous and ill suited to agriculture, but is the third in world economy. It is like an immense floating factory, importing raw material from all and exporting manufactured products.

Switzerland too does not grow cocoa but produces the best chocolate in the world. In her small territory she rears animals and cultivates the land only for four months a year, but manufactures the best milk products. It has an image of security with the strongest world bank.

Executives from rich countries who interact with their counterparts from poor countries show no significant intellectual differences. Racial factors also do not evince any importance: Migrants heavy in laziness in their country of origin are forcefully productive in rich European countries.

The difference is the attitude of the people, moulded for years by education and culture. When we analyse the conduct of people from rich countries, it is observed that a majority abide by the following principles: 1. Ethics 2.  Integrity; 3. Responsibility; 4. Respect for laws and regulations; 5. Respect from majority of citizens by right; 6. Love for work; 7. Effort to save and invest; 8. Will to be productive. 9. Punctuality.

In poor countries, a small minority follow these basic principles in their daily lives. We are not poor because we lack natural resources or because nature is cruel to us. We are poor because we lack attitude. We lack the will to follow and teach these principles of working of rich and developed societies. We are in this state because we want to take advantage over everything and everyone, because we see something done wrong and say, “Let it be.” We should have a spirited memory and attitude. Only then will we be able to change our present state!

Migrants have every right to expect to be warmly welcomed in Goa. They are our brothers and sisters. If we do not treat them courteously and justly, will God welcome us in His paradise when we come face to face with Him?

I have had such good experiences with migrants. There were two little girls of road construction workers. I was walking down the road on a sunny day. They must have thought I was thirsty and promptly offered me their bottle of water!

On another occasion, I was travelling by bus and the conductor did not have change. The elderly migrant man sitting near to me immediately offered his change for my note. As a young Goan next to me said, “Do we want to drive people like these out of Goa?” People like these, from the man from the North East who helped me down some steps, or the laborer who quickly lept to his feet to give me a helping hand or all the other migrant workers who set such a good example of dedicated hard work as well as normal, natural kindness? We need people like these and must welcome them in Goa!

AFTER having patiently suffered and silently endured the BJP’s rampant corruption, nepotism and arrogance over five years, Goa has peacefully but confidently voted for a better state.

Of the 251 candidates who contested, only 40 will win. On March 11, the defeated candidates will have to find another way forward. For those who fail to get elected, the consolation is they can try their luck at the Panchayat elections on May 21, or retire gracefully.

The next government has a daunting task clearing the BJP’s muck and the huge state debt left by squandering taxpayers’ money on misplaced priorities. But our Goa shall overcome and march ahead!