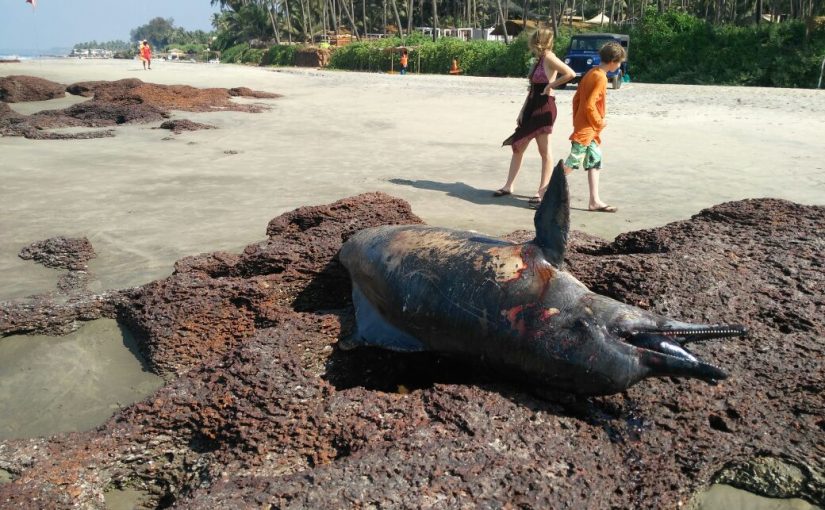 BEACHED: Drishti lifeguards came across this grim picture while patrolling Ashwem beach in north Goa on February 12. A hefty six-foot bottlenose dolphin washed ashore and breathed its last on a rock. How and why, natural or unnatural death, nobody knows. No inquests are done for dolphins although they’re highly intelligent marine mammals and strong swimmers, swimming in the womb itself! The dead dolphin was handed over to the Forest Department and the picture sent to us by concerned Drishti Lifeguards

THE Supreme Court order to remove liquor shops along national highways and not to issue any more fresh licenses is too harsh, especially in a state like Goa where thousands depend on retailing it. It’s a livelihood industry.

The reason why even domestic tourists flock to Goa year around is because of cheaper liquor. If establishments serving liquor are served notice to stop selling it, surely domestic tourism will be the first casualty.

Some Goans have taken huge loans from relatives and banks to set up shops and they will suffer loss. Who will compensate them? The SC’s excuse is that a ban on selling liquor along highways will reduce the high incidence of accidents. People will start selling it illegally, in vans or trucks in collaboration with our corrupt cops! The sale of liquor and drugs is big business in this state.

If the SC is so interested in reducing road accident numbers due to drunk driving, instead of targeting vendors, it should call for a nation-wide ban on the manufacture and sale of liquor. Catch the bull by the horns and not the tail! Jai Hind!

A YOUNG man in his 30s would stand on the footpath opposite the Tata Cancer Hospital in Mumbai and stare at the crowd with fear upon the faces of patients at death’s door and their relatives with equally grim faces, running around trying to do something. The sight disturbed him for most patients were poor from distant towns, had no idea who to meet and what to do, had no or little money to buy medicines or even food. The man returned home and thought, “Something should be done.” He was haunted day and night.

At last he found a way. He rented out his hotel that was doing good business and raised some money. From these funds he started a charitable activity opposite Tata Cancer Hospital on the pavement next to Kondaji Building. He had no idea that the activity would flourish even after 27 years!  It involved providing free meals to cancer patients and their relatives. Many people in the vicinity approved of this and beginning with 50, the number of beneficiaries rose constantly. As the number of patients rose, so did the number of helping hands.

Years rolled by and the activity continued undeterred, come winter, summer or dreaded monsoon. The number of beneficiaries soon reached 700. The pioneer is Mr Harakhchand Sawla. He work did not stop at distributing food. He began supplying free medicine for the needy. He started a medicine bank, enlisting voluntary services of three doctors and pharmacists. A toy bank was opened for young patients. The Jeevan Jyot Trust he founded now runs more than 60 humanitarian projects. Sawla, now 57, works with the same vigour. A thousand salutes to his boundless energy and monumental contribution.

And to think there are people in this country who look upon Sachin Tendulkar as God for playing 200 test matches in 20 years, a few hundred one-day matches and scoring 100 centuries in 30,000 runs. Hardly anyone knows Harakhchand Sawla, leave alone call him God for feeding lakhs of patients and their relatives. We owe this discrepancy to our mass media! A relentless hunt on Google failed to procure a photograph of him!

Crores of devotees hunt for God in Vithoba temple in Pandhapur, Sai Baba temple in Shirdi, Balaji temple at Tirupati, but they will never find God. God resides in our vicinity. But we, like mad men and women run after godmen and godwomen styled variously as Bapu, Maharaj, Baba. All our Ali Babas, Maharajas and Bapus become multi-millionaires but our difficulties, agonies and disasters persist unabated till death. But for the last 27 years, millions of cancer patients and their relatives have found God in the form of Harakhchand Sawla. He deserves his share of fame!

IT’S bad enough that we have to fight for justice. It’s worse to get an order passed in your favour, and then realise there’s a whole new fight to get it enforced! Last week I saw a post on Facebook about Balkrishna Busa of Dona Paula, who has been on a hunger strike for more than a month in Porvorim.

Apparently, his two daughters were victimised and harassed by headmistress Mariazila Alfonso of Royal High School in Taleigao in 2014. He says they underwent corporal punishment, had to clean toilets, pay excessive fines for minor things, and were mocked for being OBCs. He lodged a complaint and police finally registered an FIR based on complaints of six parents against the headmistress for alleged mental and physical harassment of students.

The Goa State Commission for Protection of Child Rights on August 26, 2014, in its final order recommended the Directorate of Education to initiate disciplinary action against her or terminate her services. So why is she still scot-free? Balkrishna, who has been sitting under the scorching sun outside the Directorate of Education at Porvorim for over a month, is severely sun burnt and suffers from his daily fast. He intends to protest the non-execution of the order even though it meant he had to give up his job.

People are laughing at him because his sign says that he’s fasting from 9am to 6pm, but shouldn’t the injustice of this and his suffering be acknowledged and respected? It’s time our democracy makes it easier to enforce orders. In my eyes this is utterly disgraceful and a telling comment about where democracy is going in this country.