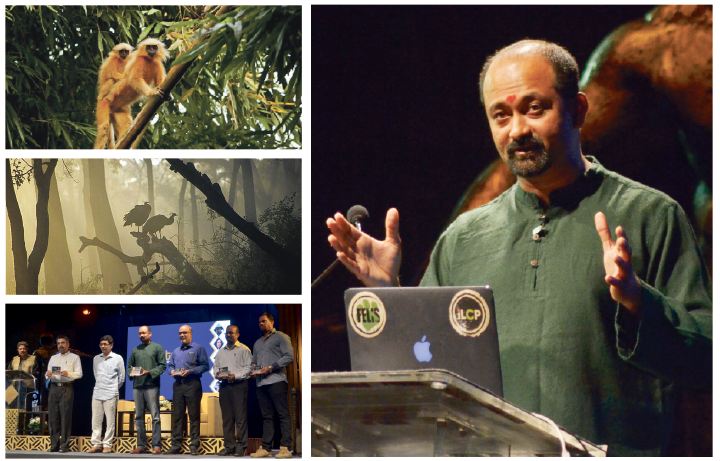 FESTIVAL OF IDEAS: The D D Kosambi festival included a call to save our rivers by wildlife phootgrapher Sandesh Kadur

SET the rivers of India free, let them flow unhampered by dams. That was the key message of this year’s first speaker, celebrated wildlife photographer and activist Sandesh Kadur at the 10th DD Kosambi Festival of Ideas at the Kala Academy on February 13, 2017. It was a breathtaking, spellbinding presentation titled ‘India’s Mountains of Life’ and showcased powerful images of wildlife in the Western Ghats and Himalayan forests. India, exclaimed Kadur, is surviving only on five per cent of its remaining wildlife habitats. Five per cent is all the wildlife forests we have sustaining us!

His talk came with several key messages to a packed audience. The main one being on the subject of the sub-continent’s water crisis and how we as a civilisation have just not protected and conserved our rivers and water bodies and it is now no joking matter. We better wake up and treat them with respect if we want to continue to harvest the precious resource of water to continue to live. All life on earth depends on water including the wildlife species in forests and mountains – water does not sustain just the human species! Life on earth is interdependent and what happens to one species affects another

Water, or rather the lack of it, is what will lead us into a third world war, he predicted. He added that it is disappearing from the sub-continent at a rapid rate due to changing climates, vanishing wildlife habitats, and if we don’t clean up our act vis-à-vis how we conserve, protect and respect our water bodies it won’t be any ordinary world war. The world may be stressed but we need to restore and safeguard our mountains and natural water resources if we hope to survive.

Elsewhere, a more enlightened world is freeing its rivers from big dams while we in India and our neighbouring countries are busy constructing mega dams to destroy entire river eco-systems and wildlife biodiversity. He said that if only we understand how by damming rivers we impact wildlife habitats and human life too, we would immediately un-dam and free our rivers, seek other more modern ways to harvest the energy we need. Long-term development and progress must seek to let rivers flow unhindered be it from the mountains of the Himalaya or the Western Ghats where he spent many of his initial years fine-tuning professional skills as a wildlife photographer and activist. From king cobras to clouded leopards, he has seen them all in the wild while they’re still free to live, saving wildlife habitats in the larger interests of the people of this country.

In his journeys into the “mountains of life” (for that’s exactly what mountains are and he has a book by that name), he has turned into a crusader for saving rivers which make our land rich, “As a wildlife photographer I spend many sleepless nights out in forest and I have some stories of adventure to tell…I have become a story teller, want to tell my stories.” Real life stories which people will listen to and be influenced by into changing their lifestyles for the larger good of life on earth.

Saving India’s life-giving water resources along with a  rich wildlife heritage is a subject close to Kadur’s heart. In younger years, his passion for wildlife was fired reading Jim Corbett and Kenneth Anderson books. He is a Bangalore boy. On one occasion, he went to Banargatta Park with a friend and saw a leopard. “I was hooked and decided to dedicate my life to wildlife after that!”

The British, he says, may have hunted the big cats with a rifle, but he goes hunting for photographs with his cameras, and don’t believe the British blah blah of a tiger being a gentleman that will eat only meat it has killed. “A hungry tiger is not above being a scavenger and will eat at any fresh dead meat discovered like a rhino, which might have just died of old age!”

The Western Ghats, he said, are so full of life and the lands “so exquisitely hidden, hiding many worlds.” Some of his pictures showed wild kurinji flowers which bloom once in eight, 10, or 12 years depending on the species. He has heard cicadas at nightfall, a sound which can make a human go deaf!  He has photographed rare birds, a black panther which is rare to see, Nilgiri langur which is endemic to the Western Ghats, even a frog the size of a `1 coin! There are 350 species of frogs in the Western Ghats, “Do you know there are tree frogs, burrowing frogs, and a foot-flagging frog!” The last is a unique frog discovered and named Nasikabetraches Sahyadrensis. Everyday in the Western Ghats one may discover a new species and all of it survives thanks to an abundance of water which we human beings are fighting over to use and abuse.

Kadur’s collection of wildlife photographs and documentaries have won fame in internationally famous journals like National Geographic and BBC. He has many awards and authored several books, all of which, he says, celebrate our wildlife.  If his images make people understand the importance of conservation and protection of  wildlife habitats, he would feel rewarded. Photography is really the power of images which can change a mindset. A photograph, as it is said, is worth a thousand words!

With his photographs and documentaries of wildlife and books, he reached out to the late President Kalam, the Dalai Lama, Nandan Nilankani, Dr Bawa and many more to get them on his side for a cause, “and in the process I have become a communicator.” It is the images which wildlife photographers present to people which eventually lead to some good things happening. In 2012, around 39 sites were recognised as World Heritage Sites in India. This is the power of images in helping conservation of wildlife habitats and what he  does with passion for a living is vindicated.

Photographer extraordinaire Sandesh Kadur is the founder of Felis Creations, a media and visual arts company creating content to inspire and promote the values of wildlife conservation along with a host of other natural elements which impact us all.

Needless to say this was one memorable DD Kosambi Festival of Ideas talk which will remain in the mind for long.