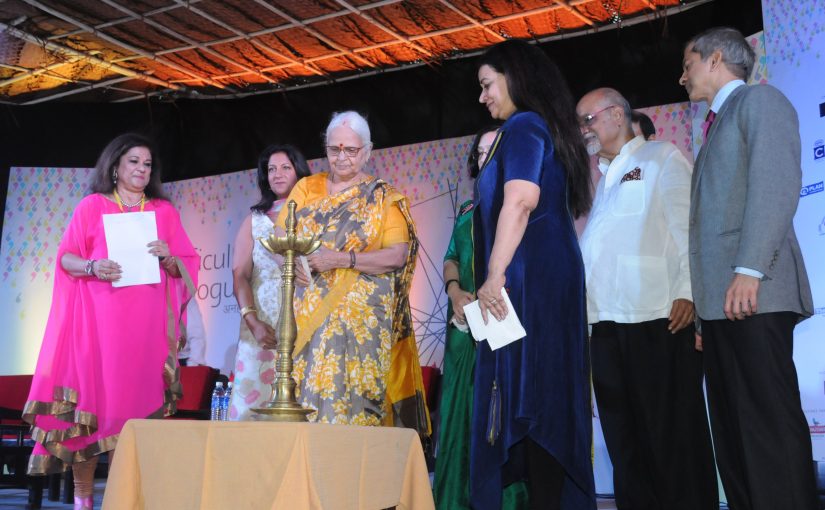 Catching some of the Difficult Dialogues 2017 Summit in Panjim

THERE’S just too much talk nowin the capital city Panjim, my dears! Either one after another, or simultaneously at various venues. This is the season when everyone loves to come to Goa for one reason or more, combining business with pleasure, or in this case social work with pleasure, much of it well-meaning and all about returning to society or community.

I’m up to my ears on the listening side, and now suffering from pangs of guilt after listening to too many dialogues. There so many folk out there giving back in cash or in kind to the less fortunate. I feel like I’m doing nothing! Anyway, why ‘difficult’ dialogues, I wondered, while catching some of the discussions at the second edition of the Difficult Dialogues Summit at International Centre Goa from February 10 to 12, 2017.

Most seminars are all about what’s holding this country from flying into the 21st century to be on par with countries like Sweden, Finland, New Zealand, and Singapore. No easy answers came as one listened to various eloquent folk with time, money and the inclination to be seen and heard; some engaged in fascinating social work. The amount of social work in India always makes me feel the country has arrived, but all of it in the end makes one take a deep breath with a haunting question: if it has arrived, why is there no equal playing field for the rich and poor yet?

Democracy is seasoning and mellowing with ups and down and will, one of these days, reap a bumper harvest of things to be happy about.

I wish I had caught more of the difficult dialogues for much of it was about healthcare with the overall theme, ‘Is India’s Health a Grand Challenge?’

Ever gracious Goa Governor Mridula Sinha did the honours and I must say I like her more and more for her sensitivity to women’s causes. In her inaugural speech she sweetly asked, “Is there any woman in the audience who will drink the top creamy half of a glass of milk before giving the remaining to her husband or children?” “No” women in the gathering yelled. She made her point. Women see themselves as the second sex in all kinds of ways and naturally are treated as such, never mind if they need the top creamy layer of milk more than anybody else in the family – for all the strenuous house-keeping they do! After her formal speech in English she switched to Hindi which she disarmingly said she feels more at home in: “Hindi mein bolti hoon to dil se bolti hoon…”

THEY were discussing organ donation among other things at the inaugural session. Why isn’t the movement taking off? Indians lag behind in their thinking on the subject. One of the reasons reportedly is because doctors refuse to declare patients brain dead! They prefer to keep patients in the ICU to pamper rich relatives who’d like to see their kinsfolk kept “alive” on fancy heart-lung-oxygen machines until the billing is rewarding enough!

Most Indians have a closed mindset when it comes to donating organs. Laws have been passed to facilitate donation and one may offer their eyes, heart, kidneys, or liver, with kidneys being the most popular so far. Even here, according to one presentation, there is discrimination – apparently women in need of a kidney don’t get it as easily as men do! Most transplant patients are men, but women outnumber them when it comes to sacrificing a kidney for hubby, parent, son, or whoever.

Nowadays in top-notch medical facilities, most conscientious doctors ask relatives of a brain dead patient if they would like to donate the organs. Unfortunately, most relatives refuse for superstitious or religious reasons. Often, they don’t realise that a quick decision is of the essence when it comes to donating organs. Also, I suspect, efficient infrastructure is not yet in place for multiple organ donation in India, although  premier hospitals like the All India Institute of Medical Sciences (AIIMS) in Delhi have systems in place for  organ donation, retrieval, and storage, until the transplant operation takes place.

ONE speaker said that sometimes a younger family member is okay with donating organs, but seniors object. Education and conviction still has to enter the Indian psyche. Indians need to understand  that one of the kindest, most charitable acts is donating body organs so that someone on a wait list may get a new lease of life. After all, what does it matter once brain dead and if the body is young enough to pass the test for donation?

However, from the sound of it, organ donation will take some more time to become common and until then we have a long list of patients and their families waiting and praying for a donor, to live anew or die waiting.

Transplants are skilful operations and a lot must match before they get the green signal from the medical authorities concerned. It’s still taking a chance for every donor recipient, for the body may reject a donated organ. Also, given our hospital conditions, infection sets in easily and sometimes there’s nothing to do but die after all the hard work of co-ordination and eventual transplant operation.

Anyone lucky enough to be alive after an organ transplant must be on life-long drugs. The preciousness of life takes on an altogether new meaning in these circumstances, doesn’t it?

In some countries, it’s legal tender now for a medical facility on duty to retrieve organs under certain conditions i.e without relatives’ permission. In India a huge absence of trust hinders and holds up organ donation, for is a difficult thing to inspire!

Read about all the scams and rackets associated with organ donation which are reported in our newspapers every now and again. These happen in some of our richest, most prestigious hospitals. Someone said India is the place when everything can be bought – doctors, lawyers, donors.

HEALTHCARE comes fifth or sixth on the priority list of our central or state governments. India spends less than 1.5 per cent of its GDP on public health, a very dismal figure and way below many other countries. Hundreds still die of TB and malaria and now there’s the spectre of drug resistance with newer drugs becoming more unaffordable. It continues to be a case of the rich may always live, while the poor may die.

Still, let’s hope that one of these days we may say goodbye to the twin curses of greed and corruption, and more folk donate their organs. A lot of it is to do with the medical fraternity cleaning up its sins of omission and commission in the larger interest of their once upon a time noble profession.

I’d like to see more and more wealthy Indians dividing their time for a social cause! Difficult Dialogues is the brainchild of philanthropist extraordinaire Surina Narula whose fortune reportedly comes from selling curry in the UK. Women philanthropists are few and far between, but that’s because most women are not rich. They are rich courtesy fathers, hubbies, and sons. Most rich women I know prefer to burn their money on religious shenanigans, never ending sprees of shopping, travelling and other pleasures of the flesh.

The three days of brainstorming yielded some valuable recommendations which will be presented to prime minister Narendra Modi’s government. Next year’s Difficult Dialogues will discuss gender issues. Interestingly, Surina Narula has an NGO, a consortium for street children in Mumbai which is reportedly doing good work. I wish our difficult dialogues would become easier. Sometimes I think it’s only the educated and privileged who make dialogues increasingly difficult!