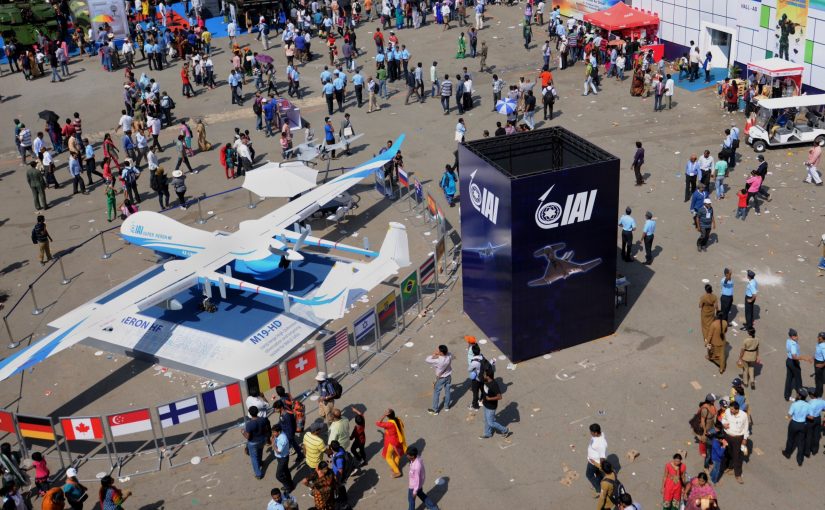 SHAME: Women attending the 11th edition of the biennial aerospace show Aero India in Bengaluru will remember it for all the wrong reasons. The approximately 3,000 women who attended each day had to make do with a dozen unhygienic toilets. Such glaring lapses are more visible when the event is an international one where India is asking the world to take notice. Perhaps someone should remind prime minister Narendra Modi that toilets for all should not remain a mere slogan

AND a few stray thoughts on the Raksha Mantri staking claims for special berths at MPT for the Navy. Unlike Dabolim international and naval airport, MPT has always been a civilian public sector establishment like all other ports in India. Though naval ships have been berthed in break waters and large exercises with aircraft carriers like Vikram Aditiya have been carried out off the Goa coast, the Navy has never claimed any special berthing facility at the MPT. It does not need to thanks to its large base in Karwar – called Sea Bird – where the naval fleet is based.

MPT has been primarily used for the export of ore that Goa has mined over the years. It has invested in mechanical ore handling facilities to enable large vessels to berth and transfer ore from barges to ships which transport ore to other parts of the world.

Historically water transport has made low-grade Goan ore competitive in international markets. Water transport is much cheaper than road transport. Ore is taken from the pit head to the nearest river point from where it is loaded on barges to be taken to MPT.  Since the suspension of mining, MPT has sought to develop into a multi-commodity port.

Besides ore, MPT has also been importing large quantities of highly polluting coal, though only a small portion is used in Goa. The coal primarily meets the requirements of the Jindal Group steel and aluminium plants in Karnataka. Some MPT berths have been leased to the Jindal Group. Similarly, the controversial Adani Group close to prime minister Narendra Modi also has a terminal to import coal for its power plants. There have been strong protests from Vasco due to the pollution caused by the transport of ore and coal through the city.

It is now learnt that the defence ministry has staked its claim to a large part of the MPT. Chairman I Jeyakumar has admitted that there have been proposals from the Navy and Coast Guard to develop special berths for them on the western side of the terminal.

The Navy has reportedly demanded dedicated berths next to the cruise terminal with a length of 450 meters for large war ships. The estimated cost of the project is `400 crores. If the Navy acquires dedicated berths in MPT, it may restrict the movement of civilian traffic as in the case of the Dabolim airport. Even now, no civilian aircraft can land at the airport between 8am and noon. Mining could be affected if the Navy imposes restrictions on the movement of foreign vessels ferrying coal to and from Goa to China and Japan..

AND a few stray thoughts on the lack of any impact of demonetisation on money power in the recent polls in Goa and Punjab and the ongoing elections in Uttar Pradesh (UP). Ironically, despite the scrapping of `1000 and `500 notes, there were plenty of new `2000 notes and new `500 notes being freely distributed by all political parties in Goa. They were largely invisible to the election commission (EC) expenditure observers. But even the EC has admitted that the amount of money seized in Goa, at `2.24 crores, was 273 per cent higher than during the last elections.

A lot of daaru – exceeding 76,000 litres – was also seized by the EC, besides the mass seizure of two-wheelers, pressure cookers and sewing machines. There are also complains that Pandurang Madkaikar who quit the Congress to join the BJP distributed coupons worth `20 lakhs of the Goa State Consumer Co-operative Society store chain. The society incidentally is chaired by North Goa BJP MP Narendra Savaikar. There are also been reports of distribution of building material like cement and tiles from various parts of Goa particularly in Babush Monserrate’s territory.

In UP where polling is on, so far over `109 crores of cash has been seized. In Punjab, `58 crores in cash has been seized. Punjab has an even more serious problem of drug addiction than Goa as seen in the film Udta Punjab. More than 2598 kgs was seized in Punjab, in addition to the 12.45 litres of liquor confiscated by the election authorities. Even in Uttarakand, which is about the same size as Goa, `3.38 crores of cash was found along with 15.15 litres of liquor.

AND a few stray thoughts on the ongoing outrage over the rigging of the postal ballot. All opposition parties are claiming that the BJP has engaged in match-fixing of postal ballots. Postal ballots are normally issued to defence personnel posted all over the country, most often far away from their homes where their votes are registered. The postal ballot facility is also extended to para-military forces like the Central Reserve Police who are deployed to maintain security and ensure that the local police do not play games under the instruction of the ruling party of the state.

During polls in Goa on February 4, as many as 17,000 residents were on election duty. This included staff at every polling booth. Historically, teachers are assigned for polling duty. Every booth requires at least five to seven employees. The electoral roles must be checked for the inclusion of the voter’s name, and someone has to put up bindi on your left index finger. There are officials manning the master control of the electronic voting machine (EVM) who give you the green signal to cast your vote after ensuring the earlier vote has been registered.

The voter also has to sign to certify that he/she has cast his/her vote so there is no bogus voting. Depending on the sensitivity of the area, there may be policemen guarding the booth. The sensitivity of a booth is decided by the possibility of fights between candidates and the use of muscle power. It is not unusual in India, particularly in UP and Bihar, for goons to run away with EVMs. The security also has to prevent corrupt officials from permitting candidates or agents from entering the booth.

All officials, including the police on election duty, are given a postal ballot. They mark their preference on old printed ballots and must drop or post it to the returning officers or the Chief Electoral Officer (CEO). Since officials on polling duty obviously cannot vote on election day as they are on duty, they are allowed to caste their vote on any day before counting begins. Political parties are agitated as there are as many as 17,000 postal votes which could make a difference to the results in many constituencies where there are multiple candidates.

The BJP has been accused of distributing electoral roles only to their candidates and party workers where the names and the addresses of those entitled to the postal ballot are clearly marked.  This gives the ruling party a major advantage as they can bribe or put pressure on the poll officials to vote for the BJP. Since they are government servants and the BJP government will continue until the new government is formed they can be rewarded or punished if they do not vote for BJP. Even if the ruling party does not resort to dadagiri, it is in a better position to canvas the votes of the 17000 Goans who are enrolled as postal voters. The opposition parties claim that in the electoral roles they were given, officials eligible for postal ballot are not marked unlike the roles given to the BJP.

AND a few stray thoughts for all students seeking admission to engineering colleges from the 2,018 having to compete with students from the rest of India for seats even in Goa. Admission to all engineering colleges in India will be on the basis of a national eligibility test instead of the present Goa Central Entrance Test (GCET). Already it has been decided that students seeking admission to medical and dental colleges, and Ayurveda and homeopathic colleges will have to undergo the national eligibility test. The objective is to ensure equal opportunity, though some students may end up with admission to private colleges which charge higher fees than government colleges.

Thus, many students from outside could get admission to Goan colleges though this may not deprive Goans of seats. Demand for engineering seats particularly in traditional areas like civil, electrical and mechanical engineering is now much less than the supply of seats. Goa now has seven engineering colleges. The number of seats has gone up from 400 a decade ago to more than 1200 seats. Even those who do not get a high percentage can hope for admission to branches for which there is not much demand.

But the fall in the standards of students appearing for the GCET is disturbing. Records indicate that the average marks have declined from 26.7 per cent in physics in 2013 to 21.64 per cent in 2016. The marks in maths have declined from 75 to 65. It is clear that Goans have lost interest in engineering, not surprising because there are not many jobs here forcing even the brightest to go to Bangalore or Pune.

AND a last stray thought for yet another Saturday. Women have indeed made great progress and broken the glass ceiling. The majority of scientists at the Indian Space Research Organisation (ISRO) which set a new record by launching 104 satellites simultaneously are women.

It is a woman who heads India’s ambitious projects to land a rover on the moon. The brain behind the Magalayam or Mars mission is also a woman. And these are ‘traditional’ women dressed in silk saris with flowers in their hair.

Among the many areas that women are now in equal competition with men is the Defence Forces. Thanks to Parrikar, women have been permitted to engage in combat roles in the air force. There are already many women fighter pilots and many more under training. Women pilots are operating advanced aircraft on the navy carriers. As many as 3,000 women were present in professional capacity at India’s greatest air show at the air force base in Yelahanka, Bangalore every year.

There has even been a proposal to move the show, which brings together buyers and sellers of fighter aircraft and weapons from all over the world every two years. The show is sponsored by the Ministry of Defence. It is all the more shocking therefore to learn that there were less than 12 toilets for the 3,000 women at the show at Yelehanka this year.

Writing in the Times of India, the executive editor of Force Magazine Ghazala Wahab reports that even the dozen toilets for women had no water, toilet paper or soap and many of them were so full of dirty water that the women had to pull up their saris or jeans when using them.

Surely a country which can put up an aerospace mega show should pay a little more attention to basic infrastructure like toilets for women. Or do they expect our female pilots and space scientists to go to the fields with a lota in their hands?