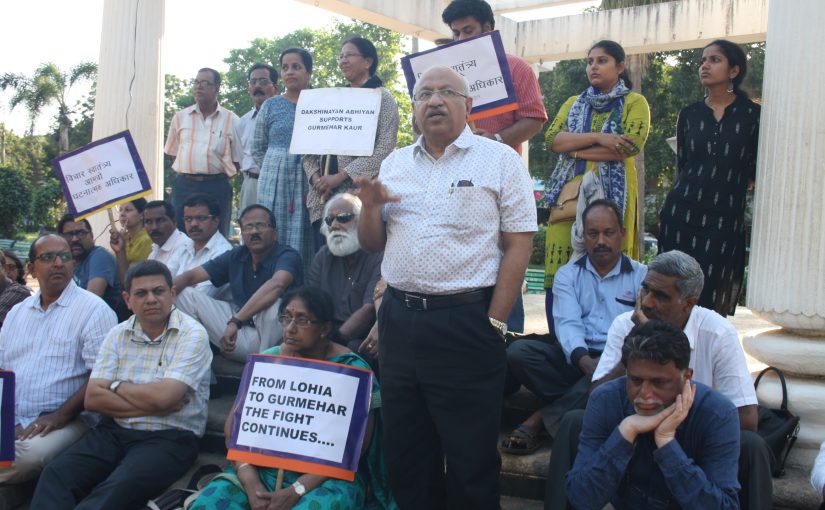 NOT BHARATIYA SANSKRITI! Dakshinayan Abhiyan members, friends and well-wishers, got together at the Municipal garden in Panjim on March 9, 2017, to support the on-going Delhi university students’ struggle for freedom of expression. One-time union leaders in Goa Prashant Naik, Dr Oscar Rebello, Datta Damodar Naik and others expressed their outrage over the despotic and hypocritical treatment unleashed on a Kargil martyr’s daughter Gurmehar Kaur in Delhi by the Narendra Modi government (Pic by Tara Narayan)

MARCH 6 was Goa former chief secretary Dr J C Almeida’s 87th birthday. Dr Almeida has been a distinguished administrator and a dear friend to the student community. It was due to his untiring efforts that during the 1979 student agitation, he managed to prevail upon the then government that the students of Goa should be bestowed 50 per cent bus concession.

Having worked under Goa’s first chief minister Dayanand Bandodkar and other successive chief ministers, he is a living witness to how over the years, our once beautiful state has been sinking from bad to worse.

On November 6, 2016, at a public function in Panaji, Dr Almeida, while expressing deep anguish over the current destruction and devastation of Goa, lamented that Goa was now gone and not salvageable. Pointing out to the rampant corruption and bad governance that has engulfed the state, he recollected how bureacrats during the tenure of chief minister Dayanand Bandodkar and later under Shashikala Kakodkar strictly functioned within the parameters of law.

At 87, Dr Almeida is still going strong, candid and bubbly as ever. May he be an inspiration to some of those spineless bureaucrats of today who unfortunately have ended up being slaves of their political masters!

DEAR mayor Surendra Furtado, what’s the point of a pious early clearing of the choked gutters of Panjim if the garbage piles are not removed by the CCP, but left in situ everywhere?

Creepy folk shove it right back into the gutter to make parking space their car or two-wheeler. Or with the first rains, it’ll all go back to clog up the gutters with vengeance. Is there any explanation for such a long gap between clearing gutters and removal of the garbage piled up alongside. The labour have got their `500 or more for a job done in vain, if the garbage is not lifted by CCP staff/vehicles and deposited somewhere where it can composted or be treated appropriately. Vinash kale vipreet budhi!

WITH regard to your comments about Adolf Hitler in Stray Thoughts (Goan Observer, March 4), please note you are right, greedy politicians make war. But there are some errors. Hate propaganda against Hilter is given to the press, not your fault! I have researched for 40 years. World War I was caused not by German assassin, but by Gabriel, a Serb.

Hitler didn’t kill Jews because he was superior. Jews think they only are fit to rule the world as chosen people. Hitler is criticised, not Joseph Stalin who killed 40 million. Hitler did something more painful than killing Jews. If I say he killed Jews, you will sympathise with me. If I tell you what he really did, you will say he is good! He is hated because he freed the Germans from the Versailles Treaty, which enslaved Germans. He did not pay reparations, made Germany strong, which displeased the victors.

THIS is to caution vehicle owners. The New Motor Vehicle Act was passed on February 27, 2017, in Rajya Sabha and is now in force.

Also: Use of mobile while driving: `5,000; drunk and driving `25,000; three times memo “license japt” in both two- and four-wheelers. After the third offence, the license stands cancelled across India. Be sure to inform all your friends!

A school principal in Singapore sent this letter to parents before the exams:

The exams of your children will start soon. I know you are all really anxious for your child to do well. But please do remember who will be sitting for exams among the students…

There is artist who doesn’t need to understand maths.

There is an entrepreneur who doesn’t care about history or English.

There is an athlete whose physical fitness is more important than physics.

If your child does get top marks, that’s great. But if he or she doesn’t, please don’t take away his or her self-confidence and dignity. Tell them it’s okay, it’s just an exam, they are cut out for much bigger things in life. Please do this and when you do, watch your children conquer the world.

One exam or low marks won’t take away their dreams and talent. And please do not think doctors and engineers are the only happy people in the world!

With warm regards, The Principal.