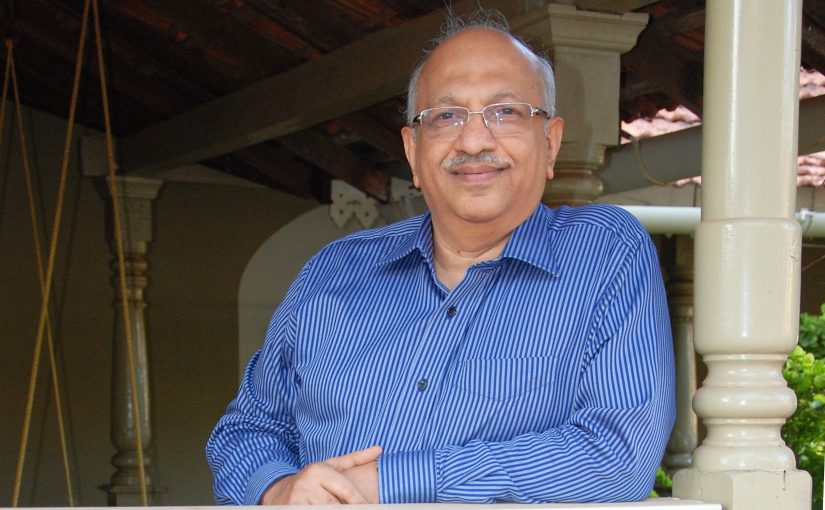 Goa Forward has brought forward this word Goenkarpon and Manohar Parrikar, whom I would call as Chief Minister of North Goa since most of the Ministers in his cabinet are from North Goa has borrowed this word Goeankarpon from Vijay Sardessai, Leader of Goa Forward. However the exact meaning of the word Goenkarponn is not clear. The politicians have got vested interests of keeping it ambiguous.

The citizens of Goa should however know what is Goeankarpon, what are its undercurrents and nuances. I would make two parts of Goenkarpon. The iceberg has one eighth of its surface visible above the sea and the remaining seven eighth of its surface is submerged under water. Similarly Goeankarpon has its visible and invisible dimensions. One can also term it in computer technology term as hardware and software of Goenkarpon.

Goenkarponn manifesto itself visibly through our mother tongue Konkani, our flora and fauna, our traditional architecture, our religious traditions, communal harmony, Goan festivals, folklore, literature, art and culture. The invisible aspect of Goenkarpon is very important and crucial. It is manifested through various qualities of head and heart of Goan community.

A Goankar is essentially a jovial, happy go lucky, susegad person from positive perspective. she likes to work hard and enjoys her leisure time. Goankar is loyal and committed to her work. She is hardworking and can take any challenges in her professional life. A Goenkar is highly hospitable and enjoys treating her guests with warmth and affection. The Christian values such as love, kindness, compassion are essential part of Goan nature irrespective of her religion. Every Goenkar has a great sense of humor. It is manifested through folklore, tiatrs and cartoons. Compared to the population of Goenkars, the creative Goenkars in the field of literature, art, science and sport are very high. Average Goan is very frank and outspoken. Her mind is as transparent as the fresh flowing spring water.

A Goenkar thinks collectively and also acts collectively. Therefore there are words in Konkani such as “Dha Zanachi Budh” which literary means “Let ten people meet and decide.” “Goakari” which later developed into Communidade is a conspicuous example of collective farming of Goans. Some of the creative inventions such as Khazan farming, sluice gate   ( Manas), Hurrak, Feni, Puran Farming, fishing by way of Khutavani, Dipakavani, Rapon, hunting by Bhovandi are perfect examples of collective actions. Simplicity is another great virtue of Goans. A Goenkar is not greedy. Respect to elders and women is a family value which has been engraved in every Goan for centuries. A Goenkar is not quarrelsome and violent. Therefore there were hardly any cases of murder, divorce and rape prior to liberation of Goa. A Goenkar is highly religious. She believes that God will stand by her at all times. Many Goenkars especially from Hindu Bahujan Samaj have become teetotalers due to their religious convictions. A Goenkar does not mind doing any sacrifice for the sake of members of her family. A Goenkar is highly mobile and she migrates for the sake of job to foreign countries. A Goenkar has learnt the importance of education few centuries back and the parents even with abstract poverty have made great sacrifices to educate their children so that they can come up in life.

When I think of Goenkarpon I ask myself whether Goeakarpon is full of virtues and free of vices? My answer is in negative. The jovial nature of a Goenkar is making them lazy and lethargic and makes them indulge in conspicuous consumption. Sense of humor is overflowing into taking sadistic pleasure in finding faults in others, writing anonymous letters and turning facebook into defacebook. Entrepreneurship in Goenkars is decreasing by geometrical progression. Mobility which is a virtue is unfortunately turning into a vice and Goenkars are migrating abroad by selling ancestral lands and occupations. Instead of thinking and acting collectively, the mentality of “Hanv Sangta Ten Tun Aik” which means

“ What I say you hear” is becoming predominant. The conspicuous example is Vijay Sardessai taking decision to back BJP without even bothering to consult his party President Prabhakar Timble who resigned not only as Party President but also as member of the party and members of the Executive Committee, Mohandas Lolienkar, Prashant Naik and Dilip Prabhudessai who mutely agreed to the decision. Lack of ambition is another vice which I have noted in Goenkars. If not Manohar Parrikar would not have resigned as Defense Minister and come to Goa as Chief Minister.It is like a big fish in the sea coming to a small pond to become king of frogs.

In the near future these vices in Goenkarpon predominate and overweigh the virtues, then we will have to say goodbye to this Goenkarpon because Goenkarpon is not the ultimate value.The ultimate value is humanity. If in the name of Goenkarpon politicians like Vijay Sardessai and Manohar Parrikar trample the values such as honesty and integrity then we will have to dump them in the Arabian Sea disgraced politician like Vijay Sardessai and Manohar Parrikar together with their tainted flag of so called Goenkarpon!

The author is Konkani writer, social activist and Businessman.

2 thoughts on “What is Goenkarpon ?”