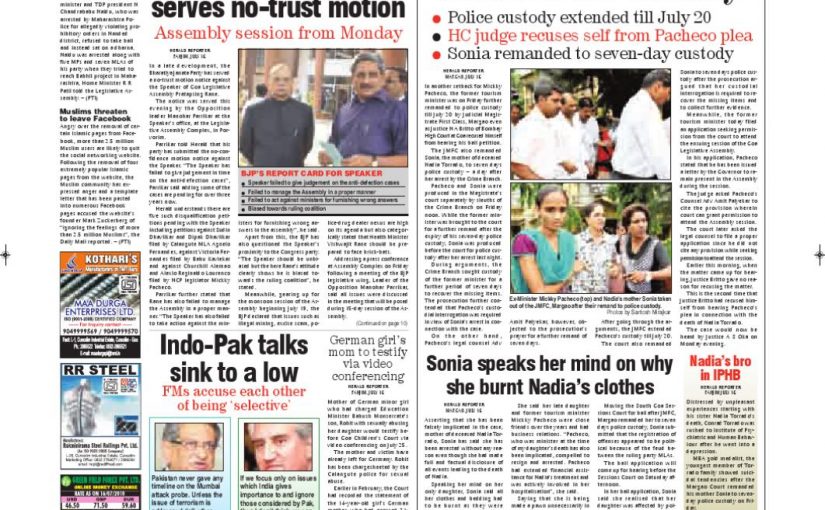 MONOPOLY: The OHeraldo which I converted from a Portuguese daily to a full-fledged English daily has never had a Goan editor

Even 55 years after liberation and 50 years after the opinion poll, the editors of all the English newspapers in Goa are still bhailes (outsiders). This is strange considering that many of the best editors in India, such as Frank Moraes – the legendary editor of the Indian Express – was a Goan. Though there are many Goans in high positions in the newspaper industry across the country, they have been reluctant to take jobs in Goa where they feel they will be cut off from the mainstream

EVEN 55 years after liberation, the editors of all the daily English newspapers in Goa and indeed many of the Marathi newspapers, are non-Goans.

The editor of the Herald, the Portuguese paper I converted into English and managed for two decades from 1983 to 2003, is a Bengali – Sujay Gupta. The editor of Goa’s oldest newspaper, the Navhind Times, is Arun Sinha who is from Bihar. He should have been retired a long time ago but has managed to hang on despite charges of molestation because he was a classmate of the Bihar Chief Minister Nitish Kumar. At least that is what he claims. Since there is an outside chance that Nitish Kumar may become the prime minister, the owners of Navhind Times are reluctant to replace him with a Goan editor.

In theory the editor of the Goan, which is owned by a Goan company – the Fomento group, is Derek Almeida who is a niz Goenkar. But he is not a full-fledged editor as he reports to the editor-in-chief Ishan Joshi, who is not a Goan. It is not surprising that the Times of India being a national paper has chosen to appoint a non-Goan, and somebody of Tamil Nadu origin, as editor. I must acknowledge that I, the first editor of the English edition of the Herald, am also a Tamil tiger.

THE question is often raised as to why no Goan has been appointed as the editor of a Goan daily newspaper. Among the first editors of the Navhind Times was Lambert Mascarenhas who is still going strong though he has completed a century. He did not last long as he had serious differences with the Dempo family who owned the paper who not only wanted him to support the government but were in favour of merger with Maharashtra. In fact I understand that Arvind Bhatkar, who had been appointed as a lecturer in Economics in the Dempo College of Arts & Commerce, was sacked because he campaigned against the merger of Goa with Maharashtra. The only Goan newspaper which opposed merger with Maharashtra was Rashtramat, which was primarily financed by the late V M Salgaocar.

Indeed, until a decade ago even the editors of Goa’s Marathi newspapers were from outside the state. All the early editors of Gomantak, the most influential Marathi newspaper, were Maharashtrians from Bombay and included Narayan Athawale, my former colleague in the Indian Express who was against Konkani being made the official language of the state of Goa. The war whether Konkani or Marathi should become the official language of the state was fought by two Narayans, Rajan Narayan and Narayan Athawale, both of whom were from outside Goa. The paper with the largest circulation in Goa is Tarun Bharat, the Goa edition of a Belgaum newspaper, edited by Kiran Thakur.

I have often been asked why no Goan has been appointed as the editor of a Goan newspaper. Frederick Noronha, who now runs a publishing house, accused me of deliberately destroying the chances of any Goan who worked for Herald from being appointed editor of the Herald. In fact, Rico, as he is popularly called, has written almost an entire book on how I destroyed the careers of promising Goan journalists. This is totally incorrect. In my opinion Rico was never editor material as he did not have the courage of his convictions.

IT IS not as though Goa did not have many talented journalists even post liberation. This can be seen by the fact that several hundreds of them are doing very well outside Goa. The majority of the newspapers in the Gulf are run by Goans, many of whom learnt journalism in the Rajan Narayan school of journalism at the Herald. In my 50 years in journalism, during which I have been editor of at least half-a-dozen magazines and newspapers, I have never cared about degrees and academic qualifications while recruiting staff. For me what mattered was how well people could perform their jobs. The analogy I used to give recruits was that I would throw them into the swimming pool. If they learnt to swim, they stayed. Those who did not, were asked to go, as they had no aptitude for journalism.

Journalism is not just a craft but an art. You either have a natural flair for writing or you don’t. Some of the best journalists in the country do not even have a degree. And it is not as though Goans have not reached the top in journalism outside Goa. Among the first editors of the Times of India Group who later on went on to become the editor-in-chief of the Indian Express was Frank Moraes, a Goan originally from Santa Cruz. He was the editor of the Indian Express when Indira Gandhi declared an emergency in 1975. I had the honour of putting together his front page editorials under the title of Myth and Reality. But like many Goans within Goa and outside, he had a drinking problem.

I know at least two journalists who were brilliant and should have succeeded or replaced me as editor of the Herald. I did not come in their way and would have been happy to hand over the reins and return to Bombay, which would have been much better for my career. It took me 25 years to realise that by opting to become the editor of a newspaper in Goa, I had foregone the opportunity to become the editor of a national paper. Nobody cared for what appeared in the Goan media, certainly no one in Delhi who mattered. Indeed staying back in Goa meant that I could never realise my full potential.

Not that I have any regrets. Goans have been very generous to me, making up for the ingratitude and miserliness of the owners of the Herald. Or more specifically Raul Fernandes, the son of the original owner. Mr Srinivas Dempo, who is now the chairman of the Dempo Group, would not believe me when I told him that at the end of 20 years of making Herald the second largest paper in Goa, my retirement benefits were a measly `one lakh – `5000 for every year I spent there. I paid my peons more than that when I started the Goan Observer.

TALENTED Goans did not have to be obstructed or destroyed. The most talented of them, who could have become editors of any paper, not only in Goa but across the country, self-destructed. The agent of their destruction was daaru. I had a very talented assistant editor who was the editor of Goa Today before it was bought by the Salgaocar Group. He was the best investigative journalist I have ever come across in the country and comparable to the best in the world.

If Herald is rightly praised for establishing investigative journalism in the state of Goa the credit should go to him, along with Devika Sequeira and Anthony Fernandes.

Devika left Herald early and the assistant editor had every opportunity to become the editor, if it were not for his problem with drinking. He would start on an investigative story and then disappear for a week on a drinking binge. He destroyed himself and his liver and died at a relatively young age.

Anthony, who was a brilliant chief reporter and news editor, had the same problem. Even getting a job in the Gulf did not solve his drinking problem. But he was so good at his job that even when drunk he could produce brilliant editions. This is true of many journalists I have known, both in Mumbai and in Goa.

I DO not blame the journalists alone. I also blame those who tempted them. When I first joined journalism in the late 60s, the salaries were pathetic. My salary used to be `400 a month. The owner of the Indian Express, Ramnath Goenka, used to argue that we did not need money as we could have free lunches and dinners at five-star hotels. This was true because people who wanted publicity were always inviting journalists to drink the best scotch in the best five-star hotels. I remember I would have dinner and drinks at the Taj Hotel in Mumbai, then the best hotel in the country, and then walk home because I did not have money for the bus fare.

The reason why I thought of writing about how daaru destroyed the careers of some of the best journalists, not only in Goa, but in the country, is because the best film journalist I know, Ali Peter John, sent me his book on how he gave up daaru. This was a miracle as all his life Ali spent more time drinking then working. He drank with the bevdas in the film industry which included Rajesh Khanna and the wife he married when she was 16, Dimple Kapadia, the mother of Twinkle Khanna Kumar and mother-in-law of Akshay Kumar. Ali was himself a victim of a father who was a bevda, and a Goan mother who was forced to produce and sell country liquor to bring up her children after her husband’s death when her eldest child was just seven years old.

Daaru has destroyed the careers of not only journalists but some of the best doctors in Goa, including one of the best doctors in Goa Medical College. Which is why I think that any party forming the government should implement the Supreme Court order banning daaru shops within 500 mtrs of highways, and anyone who drives drunk and kills someone, as Salman Khan did, should be sentenced to life imprisonment.

One thought on “WHY NO GOAN EDITORS?”