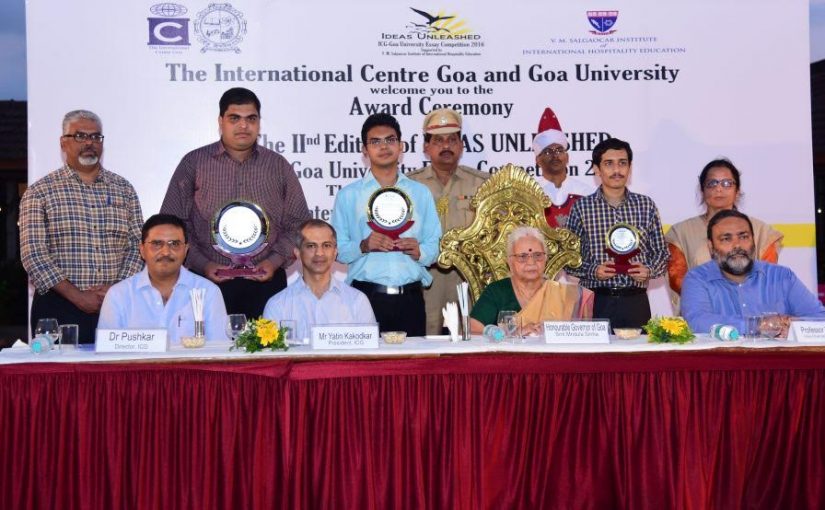 THE Goa Suraksha Manch (GSM) strongly condemns Vijai Sardesai’s demand that loud music parties be allowed late at night since Goa is a famous tourist destination. Sardesai reportedly raised the demand at a meeting of the National Democratic Alliance in the presence of Prime Minister Narendra Modi.

India has many tourist destinations which are equally or more famous than Goa viz Kerala, Rajasthan, Kashmir, Kulu-Manali, Shimla, Darjeeling, Pondicherry, etc. None of these places have raised such a demand. Sardesai should remember that Goa should remain primarily a peaceful home for Goemkars, not a place where they suffer sleepless nights.

This is also the view of Anand Shirodkar, president of GSM. Tourists come to Goa to enjoy its natural beauty, not to hear loud music. Former chief minister Laxmikant Parsekar banned Sunburn and EDM festivals in Goa in December 2016. The tourist inflow into Goa however, increased by 20 per cent in 2016 compared to that in 2015.

Goans should be alert and fight the tendencies of politicians in power to convert Goa into a heaven for gambling, prostitution and drugs under the garb of tourism development. In this context I welcome Uday Palyekar’s statement that he would suspend police officials who do not prevent rave parties and stop drug abuse on Goan beaches. Statements are not enough, they should be followed up by concrete and effective action.

THE PRICE OF SPEAKING OUT

ON TUESDAY, April 11, 2017, the High Court of Mumbai, Goa bench, gave the verdict in the case of the criminal writ petition filed by three of us (myself, Kennedy Alfonso, and Sudeep Dalvi) in the suspicious death/murder of Fr Bismarque. It ordered the state to file an FIR and conduct a reinvestigation into the suspicious death/murder and report the progress every three months. The case was filed in the first week of May last year. It took more than 11 months from filing of the case for the verdict to come and almost 18 months from the murder of Fr Bismarque.

Fr Bismarque was a kind soul whose heart bled for Goa. His life was full of fights against builders and others who were destroying Goa with collusion with the government of the day. He knew he faced threats to his life, and had even filed a number of complaints. In ordinary circumstances, it would have been natural to file a FIR when such a person is suddenly dead under suspicious circumstances. But the government had other plans. It conducted a very shoddy investigation under a section called Unnatural death which does not entail the filing of an FIR. As a result, no arrests can be made under this section. In a few months, the crime branch to whom the case was given closed the investigation calling his death accidental.

Two days after the death, I contacted Salus Correia a Goan based in Australia, and told him of the need for us to take up the issue. He didn’t just agree, he decided to raise funds. Goans world-over enthusiastically supported us and we had some funds at the disposal to do the investigation. With my telecom expertise, I knew that call detail records can give the location and time of where phone calls are made from. We contacted the crime branch and with their cooperation, we got call detail records. I am on an information security group where some experts hang out. Samir Dutt who owns a Delhi based company called Forensic Guru, which works with the CBI and helps them in such investigations, was called, and he came with sophisticated equipment which helped us get many details. We also contacted a well known forensic doctor in Bangalore who punched holes in the two doctored post mortem reports of Goa Medical College. Kennedy did super investigation on the ground due to which we found that Father was seen by some boys at 11.30 pm at a place called Uddear which is at least five kms from Babar Manos where the two boys say father was at that time. Thus, we punched holes in the boys’ testimonies. There were many other contradictions found in the police report and the two boys’ testimonies.

Still the government played truant. First it agreed that an FIR needs to be filed, but on the day of the verdict in October, they took a U turn and changed their mind. Although the judge reprimanded them, he gave them more time. Then the bench of judges kept on changing and we had to wait patiently. It is to the credit of our legal team that they patiently played for time and hit hard when it mattered.

What of the future now that an FIR and a reinvestigation has been ordered? We have only crossed step 1 in the whole sordid drama.

The game has just begun. The murderers are still at large. We need to persist and ensure that the reinvestigation is carried out properly.

The bigger question is about the law and order situation in the country. Anyone can be a victim. Especially activists who dare to speak out. If an activist can be so easily eliminated, and the government does not even bother to file an FIR, what of the future?

Will other activists dare to speak up? Remember what has happened is not just murder of Father Bismarque, but this is an attempt to teach a lesson to activists that if you speak up, your fate will be no different from that of Father Bismarque. The cases that father took up involved big parties. The Vamxim island has been sold by the Church to the Ozone group via a middle group. The Ozone group, a big real estate group that builds and sells apartments in Bangalore and other cities, ironically touts about being an environmentally friendly company in radio stations here in Bangalore. Our country has been reduced to a joke.

Our Prime Minister, an alleged mass murderer who presided over a riot where Muslim women were raped and butchered, is now talking about banning triple talaq to alleviate the suffering of Muslim women. We have a make-in-India event where we distribute Made-in-China USBs.

And the world at large has gone silent. There are few like Father Bismarque who dare to speak up and say that the emperor is naked. They need to be encouraged, not silenced. There is a huge price to pay for speaking out, but if you really care about the nation, and are a real patriot (not a nationalist as defined by the Hindutva version), you have no choice but to speak out.

The eminent MIT professor Noam Chomsky, father of computational linguistics, who is one of the vocal opponents of the US regime was once asked — why is it that you speak out? He said that if he didn’t do it he would be ashamed of looking at himself in the mirror.