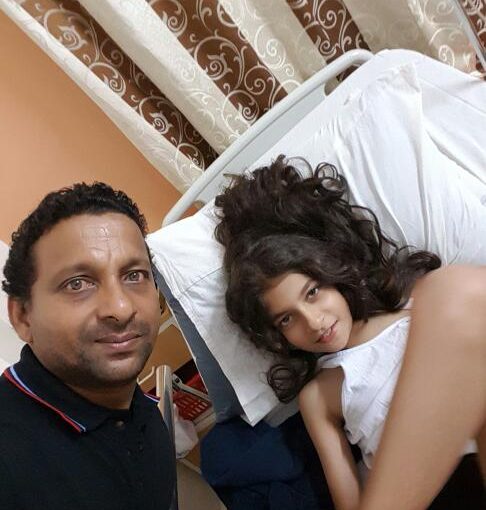 UNIMAGINABLE: The Soares family has grown up in St Inez. Now they are all victims of dengue. “Never before has this happened!” says Aldrin Soares’ grand-aunt!

IT’S a barely 3.7 kilometres creek of water, with an average width of 12.6 metres, draining from the Altinho foothills to the river Mandovi at Campal, but nobody can do anything to clean it up and keep it that way in their own interests! Not the Corporation of the City of Panjim, not the government of Manohar Parrikar, not the residents themselves. The one-time pristine fresh water creek in which old timers remember swimming and throwing a fish line by way of tranquil recreation, is today the hallmark of a cheek-by-jowl packed urban vertical slum. A perfect reflection of the mindset of government, civic corporation and the people who live in post-liberation Goa capital “city” Panjim where successive  powers-that-be can’t even do justice to its premier heritage water bodies like the St Inez creek. For years now it has been degenerating into a ganda nallah (filthy drain) but the irony is that more and more land sharks seek to put up building blocks here willy-nilly, legally or illegally.

St Inez is a prized residential address despite the foul ganda nallah! Since Panjim is just a four or five street river-side town, few Ponjekars can avoid the sight of the ganda nallah while moving around their business. All they can do is turn their eyes upwards to heaven, and heave a few sighs as if seeking forgiveness for the government of the day which turns the sacred cow into a bone of contention, but can’t do any effective house-keeping to turn Panjim into a clean, smart and happy city! The St Inez nallah reflects perfectly the mindset of Chief Minister Manohar Parrikar’s self-seeking and blinkered rancid bhelpuri government! The message is here for us to read loud and clear and to be warned: Let us think of ourselves and make as much money as we can while in power. To hell with the long-suffering and long-grumbling public. I-don’t-know and I-don’t-care is a kind of a public philosophy today that’s taking its toll on individual and collective consciences. WHAT can former CCP corporater Aldrin Soares do when almost all members of his family are down with dengue? Except suffer anguish and go around taking photographs of how his St Inez has become little better than a premium construction junk site of the worst kind with a stretch of the St Inez nallah running through, where construction labour do their personal ablutions by the perennially filthy nallah’s side  – tanker water at their disposal to use as required.

The unseasonal heat, badly serviced construction sites and the rotting St Inez nallah, all turn the St Inez precinct into a haven for mosquito breeding and all kinds of diseases to proliferate. Says Soares, “Almost my entire family is being treated for dengue malaria, my wife, my children and my senior citizen aunt… “

He is incensed by the manner in which a one-time premier address of Panjim, St Inez, has been reduced into a high-end vertical slum – obviously there’s no bona fide governance of any kind in Panjim anymore. It has become a free for all, anyone with a politician or two living in their pockets can turn a blind eye to laws and real estate dealers have carte blanche to get away despite their sins of omission and commission.

So what if more and more residents here succumb to dengue, malaria, and chikungunya? These three mosquito-borne diseases are difficult to tell apart for they all indicate similar symptoms. Malaria in general is caused by the transmission of plasmodium, a parasitic protozoa, into the body’s system. Of the two types of plasmodium species that are common , Vivax and Falcipuram, Falcipuram is by far the deadlier. Dengue (pronounced deng-gay) fever is also known as “breakbone fever” and is a painful debilitating mosquito-borne disease caused by any one of four or five closely related dengue viruses (or serotypes). In dengue the viral disease is transmitted through the bite of an infected female Aedes aegypti  mosquito and from an infected human to another through blood transfusion cases (although this is rare now).

Construction sites are particularly indicted for malaria proliferation for here there’s a high incidence of migrant labour, who themselves may or may not enjoy immunity. Once infected by malaria one may acquire an immunity from one or another virus but relapses are common too with a repeat of symptoms. Ponjekars residing at St Inez ask, Is this the price we have to pay for a dubious kind of  BJP or Congress-style progress and development?

Needless to reiterate that dengue is caused by a family of viruses and is an acute illness of sudden onset. It is particularly feared for it takes a toll of the respiratory organ of the body, the lungs. The dengue mosquito proliferates and lurks around construction sites. It is the only day time biting mosquito and bites usually in the early morning or late night, a single bite can infect you. Symptoms manifest in 10 to 15 days: Be conscious of high fever (104F to 105F) which comes and goes, with headaches, pain behind the eyes, rashes or red spots, bleeding skin patches, muscle and joint pain, swollen lymph nodes (lymphadenopathy), throat, lack of appetite, and weakness.

Without the right treatment blood platelet counts fall and this can leads to low oxygen levels and low blood pressure, till the patient starts shivering and trembling with chills and has to be rushed to hospital in a critical condition. It is important to rush the patient to a hospital equipped with ICU and ventilator, many small hospitals don’t have these facilities. Since time is of the essence, quick hospitalization, diagnosis, and treatment is critical to survival of dengue patients.

Most people think fever and headaches are symptoms of common viral flu and continue to ignore symptoms for days, finding temporary relief and carrying on with aspirins and painkillers or home medicines which don’t work. Precautions, however, may be taken at home to repel mosquitoes – with the use of citronella or

eucalyptus oil drops in floor swabbing water, planting citronella/mint around the house and on window sills. Burning camphor is also said to be an old time way to discourage mosquitoes, as is drinking tonic water (with its quinine) and eating lots of garlic. For some reason garlic odours keep mosquitoes at bay! The best thing to do is to mosquito-net windows and sleep inside a mosquito net bound bed.

You may also make a mix of equal portions coconut and citronella/camphor oils and bottle it to use as a mosquito repellent, rubbing the oil lightly into the skin morning and evening. Know that the deadly Aedes aegypti mosquito which transmits dengue needs just a teaspoon of clean, standing water to breed in and it could be your potted plant trays, old tyres, coconut shell halves lying around, as also dripping water pools from fridges and air-conditioners. It also helps to cover up and wear something with long-sleeves and trousers while going out in the evening for any fine dining anywhere. It is estimated that only one in 10 people are aware of how they may protect themselves in small ways from being bitten by mosquitoes and getting infected!