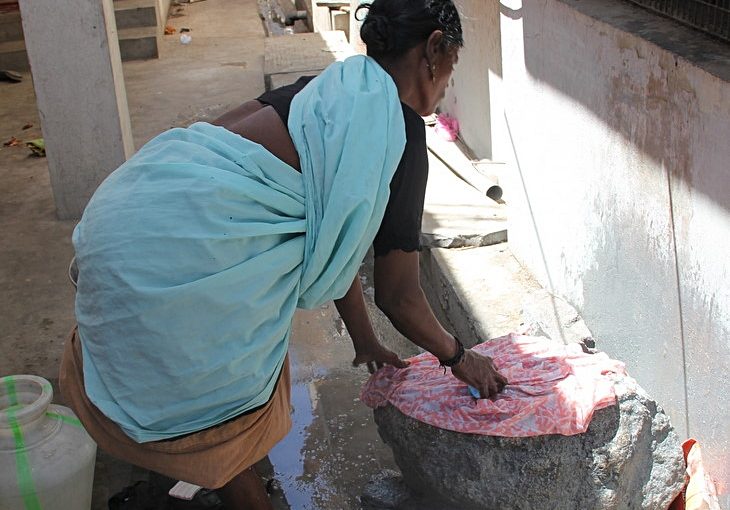 EXPLOITED: Domestic servants who often have to work in half a dozen houses for small amounts are among the most exploited section of the labour force

It is the domestic servants referred to as bais who are the heroines of Swachh Bharat. It is they who keeps the homes of the bold and the beautiful clean. They are a subset of the women of Mumbai, women of different ages, who belong to a variety of cultures, but who are connected through a culture of exploitation – used and tossed aside in the ‘City of Dreams’

THE bai (house help) reaches my home at 8.30 am sharp and she is already sweating. She has finished cleaning up two homes, my home is the third, and she has to clean and swab three other homes from where she is continuously receiving calls on her mobile to come soon as she sweats and swears some more.

Outside my compound there is the woman who sweeps the compound and as she goes about doing her job to earn a living (she is a widow), she has her little daughter holding a broom in her little hands all ready to take up the job her mother has been doing since the time she was as old as her daughter.

Outside on the road, outside a huge school for girls, an old woman sits with all kinds of  colourful snacks and sweets waiting for the recess so that little girls will come out and buy what she is selling. Only if she can sell her snacks and sweets will she be able to feed her children and grandchildren. She has been at this “job” for as long as I know.

A LITTLE down the road an old woman, who I think must be a hundred years old, is sitting outside her dirty hut and staring into space. She has been living this life in dirt which is her only property she claims and she will not let go of it even though corporations, corporates and builders have tried to threaten her and throw her out. Her dirt house stands in the midst of a cluster of concrete jungles but no one has ever tried to bring the “achche din” in her life.

Two women carrying huge sacks of waste are looking carefully in every corner to see if they can find a beer bottle or something that could give them some more money so that they can dream of having a bottle of the cheapest beer when they have finished collecting all the waste they can.

At the signal a few minutes away there are women fighting with each other, fighting other men and even children. They are all beggars who keep knocking at the dark windows of the cars of the rich but receive no response of the human kind.

A woman is carrying her sick child and trying to beg of some auto driver to reach them to the Cooper Hospital because the child is very sick and may die, but none of these “mosquito” drivers are prepared to listen to her.

A woman who has lost her senses a long time ago walks around in her dirty but flowery dress and with dry flowers in her hair. She doesn’t even know the art of begging which has become a big time business and a source of employment for many in Mumbai.

In the market, women are sitting all over, selling everything that other women in better positions need, but they keep waiting and have to haggle with women in better places over the prices of the things they sell.

Outside a well-known college where I studied once, there are girls standing at the temporary stalls where young men sell “cutting chai” sipping the tea (which I am told is prepared from tea leaves which have already been used once in hotels and sold on the pavements of Dharavi) and holding cigarettes in their delicate fingers which will not remain delicate for long if they continue hanging around the “cutting chaiwala’s” and showing of by smoking in public. There was something called shame among girls and women once. Where has that feeling of shame gone.?

In the corner of a street there is a big fight among some slum dwellers and most of those fighting are women and the language they use can make some of the biggest gangsters hide their faces in embarrassment.

AT THE most famous film studio in Mumbai, Mehboob Studios, there are young girls lining up to impress the assistant directors and if they are lucky, directors take them on as “parts”or “items” of party scenes or dance sequences. They are wearing all kinds of skimpy and revealing dresses with the most garish make-up. They all want that one “chance” for which they are openly willing to make any “compromises”.

This used to happen when girls opting for these professions were impoverished or star-struck girls from Goa or Bombay. Those girls generally were illiterate, but no longer. Today, girls in these professions of “extras” and dancers, come from good families and a majority of them are school or college dropouts and some are even graduates from Mumbai and other universities.

Most of them come to the city to make it as nothing less than a star, but when nothing works in their favour, they opt for these alternate professions because like one graduate from Bengaluru said, “It is very difficult to go back home defeated and fall in the eyes of our family, friends and society”. Another girl from Mumbai said, ”It is a very cushy profession. You just dance around or stand holding a cold drink for just four or five days in a month and you make double or more money than a graduate girl gets after slogging it out for a month. And as for all the sleeping around, tell me, in which profession does it not happen? If any girl says it doesn’t then she is lying”.

In faraway Kamathipura women are  standing behind  little dark windows and blatantly offering whatever is left of their bodies which were young once, for sale to satisfy the lust of sex-starved men.

And on the other side of Mumbai along the roads of Madh Island, young women travel in autos with red lights which is supposed to be a sign that they are available and men from all over try to hire them for their services and pick up petty fights with them about the prices of their bodies and the time they spend with them.

In that one day hundreds of women give birth to more baby girls. Who knows what the future of these mothers and their daughters will be in this city of Mumbai where stories of rape and molestation have stopped making news or those who “care” have stopped taking interest as  have the police authorities.

These are just some stories about the “bais”(women) and their many faces I see each day in the premier city of India, the richest city of Bharat, and the pride of Hindustan.