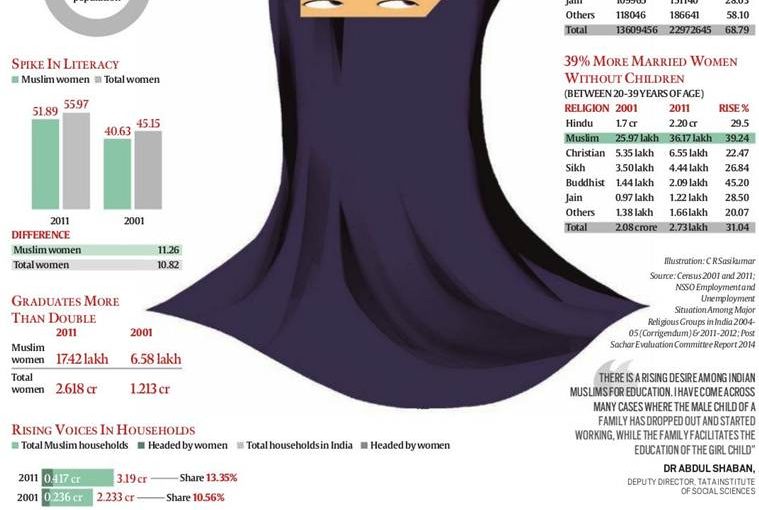 The minority Muslim community has broken the ceiling in many areas including business and industry. Azim Premji is the owner of Wipro, which grew from a dalda company to a software giant, and the three kings of Bollywood are Muslims – Shah Rukh Khan, Amir Khan and Salman Khan. And yet, apart from exceptions like Anu Agga, who managed one of India’s biggest companies, figured among the richest Indians, and was awarded a Padma Shri for social work, Muslim women have lagged behind their male counterparts. However, things are changing over the past two decades

ARIBA IMTIAZ, the youngest daughter of Imtiaz and Safiya Shaikh, has spent a chunk of her life navigating the grimy lanes of Kasaibada, a butcher’s colony in Mumbai’s Kurla, to ensure she reached college on time. Her parents were forced to move into this ghetto from Nehru Nagar, also in Kurla, after facing threats during the 1992 communal riots following the Babri Masjid demolition in Ayodhya.

Today, Ariba is a dentist. But she wants to do more, she wants to achieve her dream of entering the civil services before getting married. In many ways, this 24-year-old represents the fraught but palpable change that is underway in the lives of Muslim women in India. With the popular narrative about Muslim women largely revolving around the burkha and triple talaq, Ariba and lakhs of women like her symbolise the concerted drive by Muslim women to reclaim their space within the community and the country by using education as a tool.

According to Census data available since 2001, the number of Muslim female graduates has grown at an astounding rate of 168 per cent (see box). The national average growth during the same period — 2001 to 2011 — was lower at 115 per cent. This trend is ratified by figures made available by the National Sample Survey Office (NSSO), which shows that the growth in attendance rates in educational institutions per 1,000 persons in the age group 0-29 for major religious groups is highest for Muslim females. Significantly, this was more than the national rate in urban and rural India.

“There is a rising desire among Indian Muslims for education. I have come across many cases where the male child of a family has dropped out and started working, while the family facilitates the education of the girl child,” says Dr Abdul Shaban, deputy director, Tata Institute of Social Sciences. “However, the benefit of this education in social terms can only be felt over a larger period of time.

For instance, even now, not enough educated Muslim women are getting jobs in the organised sector,” says Shaban, who is also a member of a commission set up by the Telangana government to study the socio-economic and educational status of Muslims. NSSO data shows that Shaban’s assertion is tied to the general fall of women in the Labour Force Participation Rate (see box above). Interestingly, even educated Muslim women, who are part of the workforce, are increasingly finding it difficult to get jobs.

“Without a broad range of empowerment initiatives, Muslim women will be unable to address their vulnerability. Unless critical masses of Muslim women are mobile and able to independently access state machinery, they will not be able to seek redress for the development deficit facing them,” states a report by Dr Amitabh Kundu, who headed the Post Sachar Evaluation Committee. Data shows that this gap may have forced many Muslim women to opt for self-employment. NSSO figures show a 10 per cent fall in self-employed women in urban India but an 85 per cent increase among Muslim women.

This growing confidence can also be gauged from the fact that the proportional share of households headed by females is higher among Muslims than the national average. The government defines ‘Head of the household’ as one who manages its affairs and takes decisions, as acknowledged by others in the house. However, there is no denying the fact that Muslim women remain the most vulnerable and susceptible social group when it comes to divorce. The divorce rate for Muslim women is 5.63 for every 1,000 married women, while the national rate is 3.10.

In this group, Muslim women between 20 and 34 account for nearly 44 per cent of the total 2.12 lakh Muslim women divorcees. This age group makes up only 24 per cent of the total Muslim female population in India. At the same time, data shows, there seems to be some course correction from within the community on divorce and separation. While the total number of divorced and separated women grew by 40.13 per cent, from 23.42 lakh to 32.82 lakh between 2001 and 2011, the growth was marginally less at 39 per cent for Muslim women, from 3.59 lakh to 4.99 lakh.

Interestingly, there also appears to be an increasing assertion by young Muslim women on decisions of marriage and the choice of having children. According to 2011 Census figures, among Indian women between the age of 20-39, the number of those who have remained unmarried has been the highest among Muslims — a 94 per cent increase from 2001. Data also shows a rise among Muslim married women between the age of 20 to 39 who do not have or have opted not to have children — a 39 per cent increase.

“Things are slowly changing on the ground. The trend may not be so obvious in rural areas. But as urban Muslim women become more empowered, they are taking time to plan their families,” says Rubina Feroz, general secretary, Ishterak Education Society, and member of the Association of Muslim Professionals.

Says Ariba, the dentist from Kasaibada, “There is a growing realisation that you need to take charge of your life. Some of it stems from a sense of victimisation you feel as a member of a minority within a minority. Some of it comes from the fear that you may be discriminated. However, if you are part of the bigger, broader world with your fundamentals in place, it gets very difficult for people to bully or mess with you.”